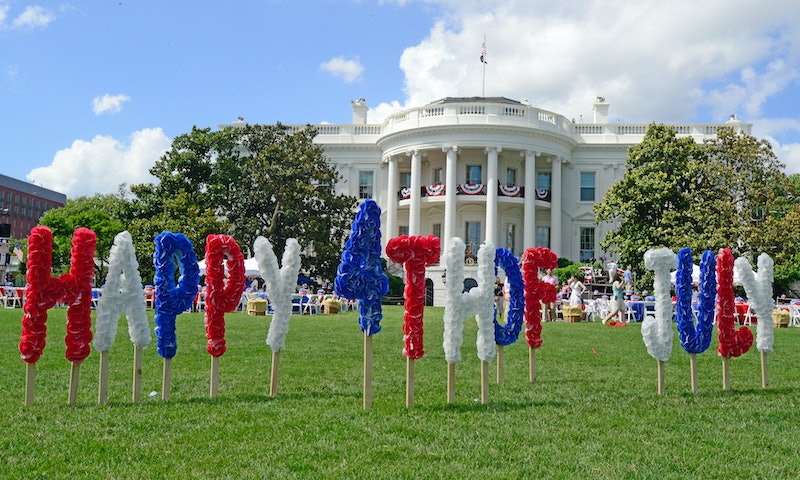 Woohoo! Fourth of July weekend is almost upon us, and you know what that means: road trips with the top down, endless BBQs, nighttime fireworks, and (if you're me) all the sangria you can handle. Sounds like the most awesome weekend ever... right? Unfortunately, it also happens to be the most unsafe weekend of the year (which admittedly, is kind of bummer news). Wondering what the most common Fourth of July injuries are? Trust me, No. 1 is a bit of a surprise...

While you might assume fireworks-related injuries are top of the list for summer's first official weekend; you'd be wrong. More people are actually hurt in car accidents every year on the Fourth than fireworks. How come? With everyone taking advantage of the long weekend and high-tailing it out of town, there are more cars than normal on the road. Add on the influx of drunk driving that goes on, and suddenly road-tripping it to your best friend's barbecue becomes a lot more dangerous. Just consider these stats: From 2008 to 2012, there were an average of 127 deaths from car crashes on Independence Day, making the Fourth the most dangerous driving day of the year. What's more, the National Safety Council predicts there will be 409 deaths and 49,500 injuries requiring medical attention this Fourth of July weekend, but of course, the "goal is zero." So what should you do if you're hitting the road? The council advises drivers to buckle up, drive slower, not use cell phones (seriously, put it down), and not drink and drive (which, obviously you should never do, but it bares repeating).

Right after car crashes, fireworks cause the most injuries on the Fourth of July, because, well, it's fire hurling through the air. 'Nuff said. In 2013, emergency rooms treated 11,400 people for firework-related injuries, 55 percent of which were on the arms or legs, according to the National Fire Protection Association. In fact, the whole month surrounding the holiday is a firework hazard — on average, 230 people go to the hospital with injuries from fireworks each day in the weeks before and after July 4.

If you're planning on lighting up a fireworks show, there are a few safety precautions you can take, as recommended by the National Council on Fireworks Safety. (Because yes, fireworks injuries are so common now, there needs to be a safety council devoted to it.) Illegal fireworks are the most dangerous, as they don't have any quality control, so it's safer to buy fireworks from official stands and tents. Whoever plans to launch the fireworks at your party should prepare a designated "shooting area" and should read the labels to understand exactly what each firework will do. And just like any activity involving fire, you should avoid drinking before lighting fireworks. (Seriously, guys.)

So there you have it. Now go forth and have a super awesome (and super safe) Fourth of July weekend!

More like this
25 Things I've Reduced My Life To, In Addition To WFH In My PJs
By Ginny Hogan
7 Things We Learned From Rebekah Vardy's First Post-WAGatha Christie Interview
By Sam Ramsden
What We Know About Where Caroline Watt Is Now
By Catharina Cheung
The 8 Best Chew Bones For Puppies, According To A Vet
By Andrea Hannah
Get Even More From Bustle — Sign Up For The Newsletter