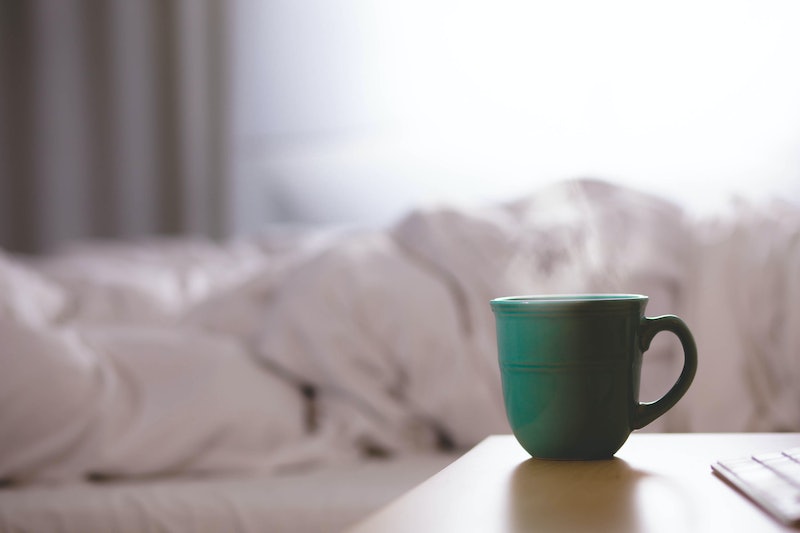 Isn’t it strange that we spend roughly a third of our days lying in bed, unconscious? That the world keeps spinning as we essentially turn ourselves off, as if we were robots in need of recharging? A lot of weird things happen when we sleep — and I’m not just talking about the recurring dream I have in which my teeth are falling out. One of the most persistent myths about sleeping is that each of us swallows eight spiders a year as we slumber. Thankfully, that one’s not true. According to Annie Sneed writing for Scientific American, the idea that spiders like to crawl into our mouths flies in the face of actual spider behavior. Spiders aren’t interested in humans as prey, and would in fact be frightened by the vibrations caused by a sleeping person’s breathing (especially if that person was sleeping with his or her mouth open). Furthermore, Sneed argues, the feeling of a spider crawling on one’s face would wake most people up. (This is true. I once discovered that the apartment I had just moved into had a roach infestation by being awakened one morning to the sensation of a roach crawling across my face. MY FACE. That memory will haunt me forever.)

But even if most things that happen during sleep aren’t quite as crazy as the spider myth, a lot of them are still pretty weird.

When you’re asleep, your muscles enter a temporary paralysis so that you won’t flail around as you dream (this is why you can dream that you’re running, but your body doesn’t actually start moving). Occasionally, people experience sleep paralysis, meaning that their minds wake up before their muscles become mobile again. It is a harmless experience, but is understandably frightening; after all, the idea of waking up and discovering that you can’t move is like something out of a horror movie.

Some people have a rare condition called REM sleep behavior disorder, in which their muscles don’t go into paralysis during deep sleep. It’s a potentially very dangerous disorder, as sufferers will move around and enact their dreams as they sleep, possibly injuring themselves and others.

Most of us are familiar with the strange, intense feeling of falling that sometimes accompanies the transitional space between waking and sleep. Known as a hypnic jerk or a hypnagogic jerk, this feeling can be disorienting, but is normal. Researchers don’t know why exactly hypnic jerks occur. Tom Stafford at BBC Future suggests that it has to do with the transition between conscious movement and sleep paralysis:

[H]ypnic jerks seem to be a sign that the motor system can still exert some control over the body as sleep paralysis begins to take over. Rather than having a single “sleep-wake” switch in the brain for controlling our sleep (i.e. ON at night, OFF during the day), we have two opposing systems balanced against each other that go through a daily dance, where each has to wrest control from the other.

“REM sleep” — the stage of sleeping responsible for vivid dreaming — is characterized by random movement of the eyes in all directions. The connection between these movements and sleeping is unknown.

According to the National Sleep Foundation, between one and 15 percent of Americans walk in their sleep. Most people do so while in deep sleep, and their behaviors can range from the very simple— like sitting or standing up — to the very complex, like walking around or driving a car. Some people think that they shouldn’t wake someone who is sleepwalking, but the Sleep Foundation says that waking the person will not harm him or her. (And sometimes, not waking them definitely will. Seriously, don’t let a sleeping person drive a car.)

Some sleepwalkers will also talk in their sleep. As with sleepwalking, sleep talking can range in complexity. Some people will only mumble, while others will carry on whole conversations. The Sleep Foundation points out that speech during sleep is “not a product of the conscious or rational mind” and therefore isn’t admissible in court. Most people who talk or walk in their sleep will not remember it when they wake up.

If you grind or clench your teeth when you sleep, you have bruxism. According to ­Best Health, about 10 percent of adults have bruxism, with symptoms ranging from the mild to the severe. Grinding can lead to problems with your teeth, as well as with the joints of the jaw. Bruxism has been linked to stress, so if you’re experiencing it, try to avoid caffeine before bed, and relax! Some dentists will also recommend a mouth guard. (I have one. It is … not sexy. But it does help a bit.)

According to the Mayo Clinic, night terrors are “episodes of screaming, intense fear and flailing while still asleep.” They are more common in children than adults, and while scary, aren’t usually harmful. They aren’t the same as nightmares; someone experiencing night terrors stays asleep the whole time, even if he or she is screaming or even moving around the house. Usually, they won’t remember the incident later.

“Exploding head syndrome” sounds like the premise for a horror movie, but it’s not actually associated with pain (or exploding heads). People with this rare syndrome hear a loud bang, like a bomb exploding or a gunshot, as they are going in and out of deep sleep. As with other sleep conditions like sleepwalking, night terrors, and bruxism, exploding head syndrome is exacerbated by stress and lack of sleep. So relax, get lots of sleep, and don't drink coffee before bed!