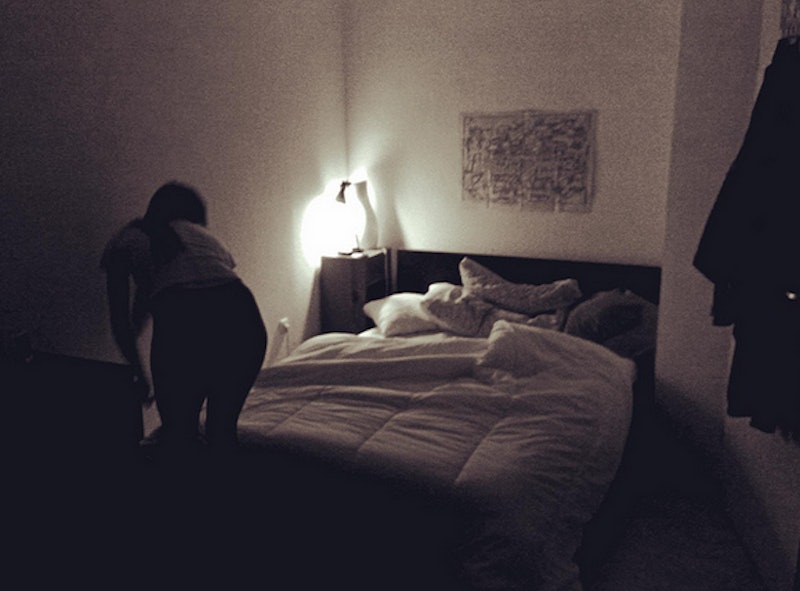 Over the last couple of years, the very serious problem of rape culture has come into the national focus, and frank conversations are being had about sexual consent. To this end, programs have been popping up in schools (both in college and the lower grades) that seek to educate students about the concept of consent and why it is necessary for all sexual encounters. In an effort to explain sexual consent to the broader public, several writers and artists have created metaphors (a few of them becoming viral online pieces) that try to explain sexual consent and why it is vitally important. But the reality is we need to stop using metaphors to talk about sexual consent because they're actually doing more damage than good.

Here's a refresher: You need to obtain consent for every single sexual encounter you want to have with another person. It's not optional, it's not something you are entitled to, and it's not something you can expect every time you ask for it, even if you're encountering a person who previously gave it to you. Consent means that someone agrees to a sexual encounter and agrees only because it's what they want, not because they were tricked, coerced, or otherwise manipulated into saying yes. If you proceed to do anything sexual with someone without getting their consent, it's sexual assault and rape. Okay? Okay.

To me, this is an extremely simple concept, but still we've seen a number of metaphorical explanations that attempt to make consent an easier notion to understand. The first consent metaphor to go viral recently was the one created by blogger Rockstar Dinosaur Pirate Princess (RDPP). In the essay, RDPP wrote that consent is an incredibly simple concept (and I agree) and proceeded to compare it to asking someone if they would like a cup of tea. The bulk of the metaphor is as follows:

You say “hey, would you like a cup of tea?” and they go “omg fuck yes, I would fucking LOVE a cup of tea! Thank you!*” then you know they want a cup of tea.

If you say “hey, would you like a cup of tea?” and they um and ahh and say, “I’m not really sure…” then you can make them a cup of tea or not, but be aware that they might not drink it, and if they don’t drink it then – this is the important bit – don’t make them drink it. You can’t blame them for you going to the effort of making the tea on the off-chance they wanted it; you just have to deal with them not drinking it. Just because you made it doesn’t mean you are entitled to watch them drink it.

They might say “Yes please, that’s kind of you” and then when the tea arrives they actually don’t want the tea at all. Sure, that’s kind of annoying as you’ve gone to the effort of making the tea, but they remain under no obligation to drink the tea. They did want tea, now they don’t. Sometimes people change their mind in the time it takes to boil that kettle, brew the tea and add the milk. And it’s ok for people to change their mind, and you are still not entitled to watch them drink it even though you went to the trouble of making it.

This metaphor got a ton of attention, particularly for the bit at the end about someone being unconscious. Of course I agree that consent is always needed, and the way to obtain it is to ask, and that if someone cannot be asked for consent, a sexual encounter cannot and should not happen. However, the main issue I take with this piece is that it seems to define consent as a mere exercise of what makes logical sense, and what's considered basic good manners.

But what really is at play with consent is power. The tea metaphor gets us thinking that consent is something that needs to be explicitly asked for, but it totally misses the driving force behind consent: the equal distribution of power between people involved in a sexual encounter. Asking for consent acknowledges the other person has power and autonomy over his or her body, and not asking for consent is an abusive, forceful use of power onto someone else.

Then, on Tuesday, the artist Banksy tweeted a pair of comics and wrote "if other situations were treated like sexual consent." Here is one of the comics:

Banksy follows a similar pattern behind the "tea vs. consent" metaphor, which is basically to say, "Look how ridiculous not asking for permission is." What I like about this comic is it shows that consent is something that all couples of all ages, genders, and orientations need to talk about.

But in these comics, we again miss the extremely important element of power the same way we did with RDPP's tea consent metaphor. Both of these metaphors water down rape and eschew addressing the consequences of sexual violation — something any metaphor about consent will do, because distances us from the topic at hand. This is to say, there is a problem with using any metaphor to talk about consent.

I get that metaphors can help people understand difficult concepts, but as RDPP wrote, consent is "not actually that complicated." So why do we need metaphors to explain it? Why do we want to see rape discussed as anything less serious than what it is? Why can't we just say that before you have sex, you need to hear an enthusiastic "yes" from your would-be partner? And if they say no at any time, the sexual aspect of the encounter is over, no questions asked.

Being deprived of your power, autonomy, dignity, and respect by being sexually assaulted or raped is not the same as being handed heavy weights or having someone insist that you drink tea with them. The comparison is insulting and ultimately dangerous because we are talking about people's safety. We're talking about the respect of basic human rights. There is nothing to which we can compare rape, and therefore we should stop making these comparisons in the form of lighthearted and oversimplified metaphors.

We need to use frank and direct language to talk about rape (sexually violating a person by forcing any sex act on them) and sexual consent (enthusiastic and un-coerced permission to engage in sex). We risk too much when we discuss these things in any other terms and call them by any other name. Consent is not tea, consent is not breakfast, consent is not a game of poker. Consent is the word "yes." I think we can all grasp that, can't we?