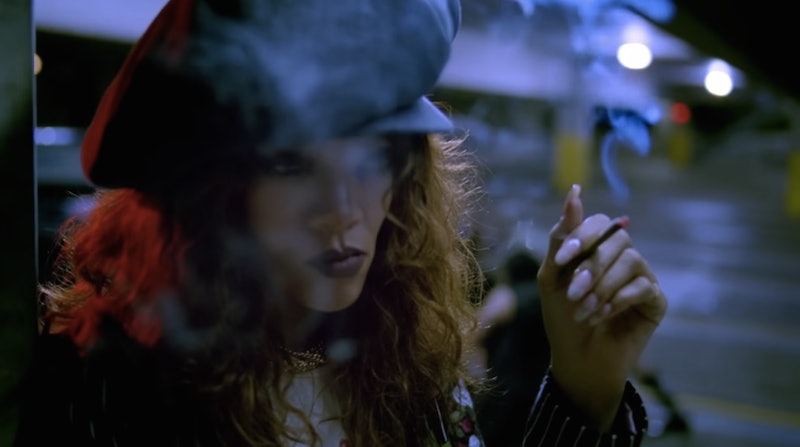 WARNING: When she says explicit, she seriously means explicit. After months of anticipation, Rihanna's "Bitch Better Have My Money" music video finally dropped Thursday morning, and I'm still not sure what I just watched. In fact, I feel like the most common reaction to this horrorfest is probably one big, "WTF, Rihanna," possibly followed by, "Should I be worried?" Which is not to say that the music video wasn't good. It was seven minutes of pure, unfiltered craziness in a way that only Rihanna could deliver. It was just a very, very nude and occasionally bloody affair that really isn't suitable to be watched around children. Then again, what Rihanna music video is?

First of all, the "b****" referred to in the title is actually her accountant (played by Mads Mikkelsen of Hannibal fame in an amazing cameo), who has been blowing her money on booze and fine ladies. Rihanna isn't having any more of his crap, and so she proceeds to kidnap and torture his wife to teach him a lesson. You know, because she has "your wife in the back seat of her brand new foreign car?" That's the most awkward (and major) part of the music video for me, because, if her accountant is the one committing the crime, why am I watching her make a poor woman pay while he's out having fun? Why did we have to zero in on that one line in the song? Especially since, at the beginning of the music video, she proves how easily she can get inside his house and head directly for him until he pays what he owes.

The concept for the music video apparently came to Rihanna directly, and she was still pretty pleased to share this videos with the world when she announced the release of the video on her Twitter.

I'm unclear as to why she made the concept of this piece this exactly, but there is, at least, one thing for sure: anyone who owes Rihanna money is probably going to fork that money over right now for fear of ending up like the woman in the music video. Heck, I might turn over my wallet to her just in case she expands her net outward from people she knows owe her money to people she thinks should give her money. And maybe that was the real point of the music video. BadGirlRiRi is coming for you, guys. And you don't want to know what will happen to you when she gets there.

Check out the NSFW music video below.