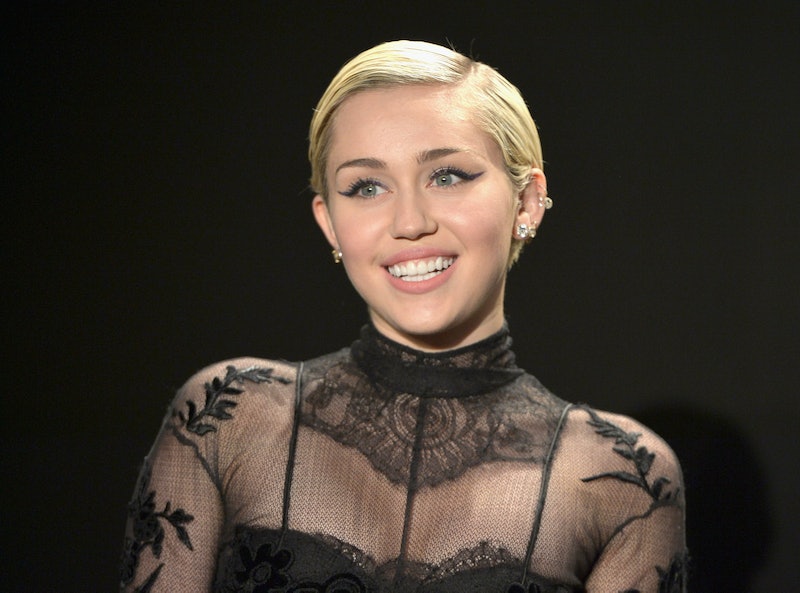 Besides being one of the biggest pop stars in the world, the former Hannah Montanat is also quickly becoming an inspiring feminist icon for a huge number of reasons, including fearlessly promoting LGBTQ rights, fighting against teen homelessness, and brazenly flaunting her form with absolutely zero shame. Well now, you can add one more reason to love her to that list: Miley Cyrus wears pasties to feel empowered and the world needs to see that.

Cyrus, as you might know, is a huge proponent of pasties. In fact, she's worn pretty much every iteration of them under the sun, including butterflies, ice cream cones, hearts, and a sequin-bedecked single pasty in homage to Lil' Kim. But if you thought baring her breasts was just some cheap publicity ploy or one more opportunity for this nudity-loving lady to show off what she's got, you're sorely mistaken. In her most recent cover interview with Paper magazine, the singer opens up about her intentions behind showing off her chest, and they're downright awesome.

I’m singing about empowerment while I’ve got my t–s out, and it’s like, 'What the f–k?' But that is empowering because the other night I was playing with Joan Jett in Dallas and I was in nipple pasties, like, ’F–k, maybe I shouldn’t go out. These people in Dallas are going to be really offended.’ And then I thought, ’No, there are people that need to see it.’ They need to see a woman standing next to another chick playing guitar, f—-n’ singing a rock ’n’ roll song with their t–s out.

You've got to love a woman who's not afraid to push boundaries and bare it all in the name of female equality.

Here are five time Cyrus was "just bein' Miley," by wearing her pasties loud and proud.

1. An Abstract Art Interpretation of the Pasty for Paper Mag:

2. When She Was A Beautiful Butterfly Performing With The Flaming Lips:

3. To Demonstrate Her Boobs Are Big Joan Jett Fans:

4. Because Nothing Goes With A Cartoon Character Onesie Like Gold Glitter Xs:

5. Who Needs A Shirt When You Have Ice Cream Cones on Your Nipples?

I certainly appreciate how much she owns her body, even if her looks are a bit out there.