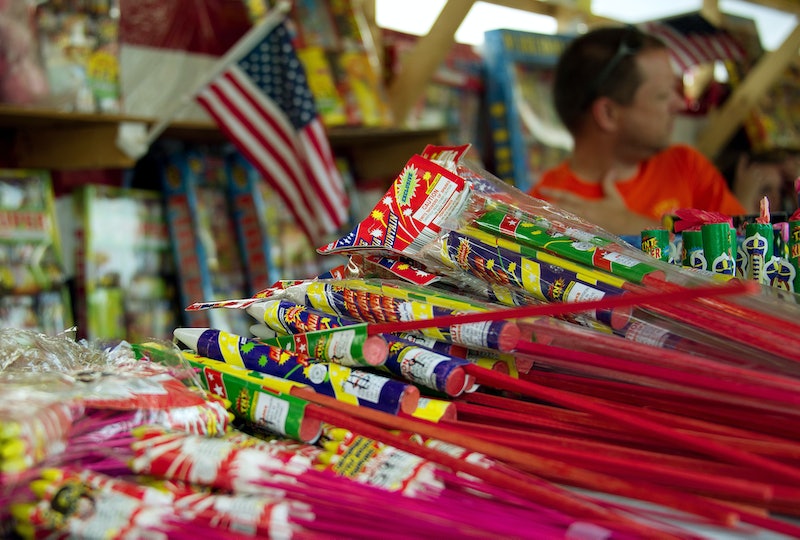 Yes, the Fourth of July is really all about America's independence, but it's also about fireworks. Lots and lots of fireworks. Unfortunately, those glorious things that light up the sky aren't legal everywhere, but more and more states are coming to their senses and allowing consumers to purchase them. New Yorkers can legally buy and use fireworks on July 4 for the first time this year, but like many states, only small things like sparklers are OK. Before you start shooting off your collection of explosives, you probably need to find out where fireworks are legal first. You probably want to make sure you won't be breaking any laws, because nobody wants the police breaking up their holiday party.

Shooting fireworks is just as important to celebrating the Fourth of July as getting a day off work, eating hot dogs, and wearing an American flag tank top. Of course, there is some risk involved, as they're objects lit on fire and exploding in the air, but if done safely, firework shows are awesome. What better way to celebrate America than watching a cool light show in the sky?

Here are all the states where fireworks are legal — and if you live in one of the states that prohibit all fireworks, you have my sympathies:

Most states in the northeast ban consumer fireworks (sorry, New Englanders!). Consumer fireworks that explode in the sky are only legal in Maine and New Hampshire. They are illegal in Connecticut, Delaware, Maryland, Massachusetts, New Jersey, New York, Pennsylvania, Rhode Island, and Vermont. Since every state has very specific rules on each type of firework, check the Consumer Product Safety Commission's list for your state's laws.

Southern states are all about fireworks, though there are a few exceptions. Alabama, Arkansas, Georgia, Kentucky, Louisiana, Mississippi, Oklahoma, South Carolina, Tennessee, and Texas allow the use of consumer fireworks. Florida, North Carolina, Virginia, and West Virginia don't allow explosive fireworks in the hands of unlicensed citizens.

Only Alaska, Montana, New Mexico, Utah, and Wyoming allow larger, consumer, aerial explosives in the west. They are prohibited in Arizona, California, Colorado, Hawaii, Idaho, Oregon, and Washington. California even has strict restrictions on which types of sparklers are OK — wire and wooden stick sparklers aren't allowed. In Nevada, each county has different laws, so check your local rules before firing up.

Sparklers seem to be the safe choice in every state, so if you're worried about accidental fires or having the cops called by your neighbors, stick to the basics.