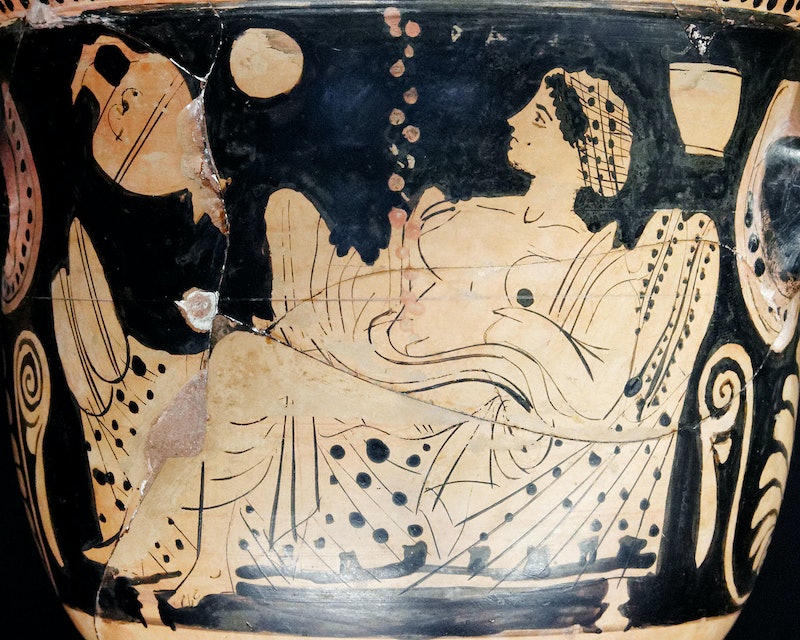 The ancient Greeks knew how to tell a good story. Greek mythology is brimming with epic battles, melodramatic fighting between gods and goddesses, awesome creature mash-ups (“Hmm … let’s give this dude the head of a bull! And I think this dog needs three heads!”), and some pretty weird stuff involving sex. We like to think of our own age as the originator of sexual adventure and kink, but Greek mythology offers ample proof that crazy sex stuff is far from a modern invention. I’m not sure that I would call the following stories “sexy” as much as “bizarre.” To be honest, most of them boil down to some variation of “Zeus turns himself into some nonhuman creature and seduces or rapes somebody.” (There doesn’t seem to be much of a line between “seduction” and “rape” in a lot of these myths. Zeus especially does not seem to be someone who is particularly concerned with consent.) The general lesson of many Greek myths — sexual or not — is simply that the gods are huge, immature jerks. While this fact makes the lives of the humans in these myths completely terrifying, it makes a fair amount of sense: I mean, if you give someone eternal life and epic power, what can one expect but an entitled douchebag? I’m talking about you, Zeus.

1. Leda and the Swan

Leda was the wife of King Tyndareus. One day, Zeus turned himself into a swan and came to Leda for protection against an eagle. He then seduced her (in some poems and artworks, it’s depicted as rape). She became pregnant and laid two eggs (because why not?). There are conflicting stories about what exactly happened here: some suggest that she also had sex with her husband that night and that some of the resulting progeny was his, but regardless, the general consensus seems to be that the children were Castor, Pollux, Clytemnestra, and Helen — Yes, that Helen, the one with the “face that launched a thousand ships.”

Danae’s father was told by an oracle that her offspring would someday kill him. As Danae hadn’t had any children yet, her father did the obvious thing and locked her in a bronze prison. Not to be deterred by mere bars, Zeus turned himself into golden rain, made his way into her chamber, and impregnated her. She would give birth to Perseus, the guy who would eventually kill Medusa. He would also fulfill his grandfather’s prophecy, killing him accidentally at a sporting event.

Zeus didn’t limit his metamorphosing-seduction techniques to the ladies. Zeus was attracted to a young man named Ganymede, so, naturally, Zeus turned himself into an eagle and abducted Ganymede to Olympus. There, Ganymede became cupbearer to the gods and Zeus’s lover, much to the angst of Hera, Zeus’s wife.

4. How does sex with a cloud even work?

Ixion does not sound like a nice guy. When he got married, he refused to pay his father-in-law the bride price for his wife (obviously the idea of a “bride price” is messed up, but that’s a topic for another post). Instead, he flung his father-in-law into a pit of burning coals, for which he was shunned by the rest of humanity. Zeus felt sorry for him and brought him to Olympus, where Ixion immediately developed the hots for Hera, Zeus’s wife. In order to test whether Ixion would actually go so far as to have sex with the ruler of the gods’ wife, he made a cloud that looked like Hera and sent it Ixion’s way. Ixion proceeded to have sex with the cloud, and impregnated it (how? I have no idea) with Centaurus. Centaurus then had sex with a bunch of horses, and their offspring were the centaurs (half horse, half human). I bet when you used to obsessively watch that part of Fantasia with the centaurs,* you never imagined that they came from a murderer having sex with a cloud, did you?

5. Cursed to want to bone your dad.

After Cenchreis claimed that her daughter, Myrrha, was more beautiful than Aphrodite, Aphrodite, who was the jealous sort, cursed Myrrha to lust after her father, Cinyras. Myrrha was horrified by her desire to have sex with her father, but went for it anyway, waiting until her mother was away to seduce him in the dark, pretending to be her mother. When he discovered the truth, he chased her away, and she ran and prayed to the gods for help. They took mercy on her and turned her into a myrrh tree. Later, she gave birth (as a tree. No, I don’t know how) to Adonis.

6. Zeus turns into an animal again.

In this myth, a beautiful woman named “Europa” and her friends went out into the fields to gather flowers. Zeus saw Europa and decided that he must have her. He transformed himself into a beautiful, gentle bull — so gentle that Europa pet him and eventually climbed onto his back, at which point Zeus (still in bull form) raced to the sea and began to swim toward Crete. Europa would become the queen of Crete and bear Zeus a number of sons.

7. More proof that Zeus is the absolute worst.

The real lesson to learn from most of these myths is that being the object of Zeus’s lust sucks. Io was yet another woman who caught Zeus’s eye and paid for it. In order to hide the fact that he was pursuing Io from Hera, Zeus cast a cloud over the Earth, which only raised Hera’s suspicions. She went to find Zeus, and in a last-ditch effort to hide his activities from his wife, Zeus transformed Io into a white heifer. Not fooled, Hera called Zeus’s bluff by pretending to like the cow so much she wanted it for herself. Unwilling to be caught in a lie, Zeus gives Io to Hera, who proceeds to torture the woman-in-cow form, first by having her kept under with watch of the hundred-eyed Argus, and then, after Io escaped, having her constantly followed and stung by a gadfly.

In case it’s not already obvious, the Greek gods and goddesses had no problem jumping into bed with their family members. Uranus (the sky) was both the son and husband of Gaia (the earth); They birthed the twelve Titans, two of which, Cronus and Rhea (brother and sister) married. Cronus and Rhea were parents to Demeter, Hades, Hestia, Hera, Zeus, and Poseidon. Zeus and Hera (again, siblings) married and had many children, and Zeus also fathered a daughter (Persephone) by his sister, Demeter. Maybe when you’re a god, you don’t have to worry about your kids sharing a tiny gene pool and being born with three heads?