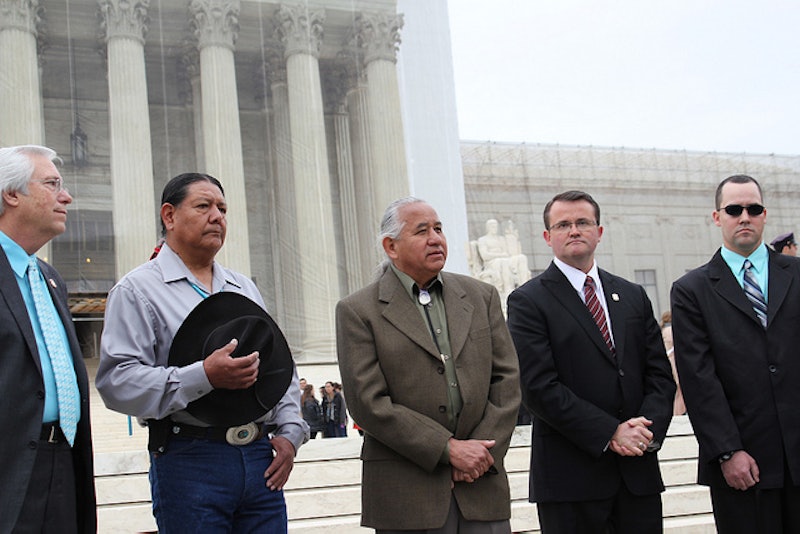 This has been a dramatic week at the Supreme Court.

However, the decision in today's Adoptive Couple v. Baby Girl might just trump them all, if not in title than in the sheer emotion on all sides of this family custody drama. As Radiolab's Tim Howard wrote: "This case puts one little girl at the center of a storm of legal intricacies, Native American tribal culture, and heart-wrenching personal stakes."

In short: A Cherokee man named Dusten Brown was in a relationship with a non-Indian woman. She got pregnant, they split up, he renounced custody, and she put the baby up for adoption. He went off to the military, came back, and, citing the 1978 Indian Child Welfare Act (ICWA), sued to have the adoption reversed. A South Carolina Circuit Court ruled in his favor, and the little girl left her adoptive parents’ home for her biological father's ranch in Oklahoma. Today, the court decided 5-4 in favor of the adoptive parents, Matt and Melanie Capobianco. Someone inside the Court screamed as the verdict was read.

Those are the facts. The interpretation of these facts, however, has been the subject of much dispute – a dispute Native American Journalists Association President Rhonda Le-Valdo Gayton argues has been largely one-sided. She points to a certain widely-viewed interview with the adoptive parents on a special segment of Dr. Phil, in which ICWA barely came up at all.

“They didn’t even contact anyone that could speak to that issue as a relevant historical [phenomenon], where our Native kids were been taken away forcefully. And that’s the reason ICWA was enacted. So that it would not happen again. It was a really one-sided story that [Dr. Phil] was contributing to. I mean that was a perfect example,” Le-Valdo Gayton said.

Today's decision, written by Justice Samuel Alito, held that hundreds of years of forced adoptions isn't the historic mandate ICWA supporters make it out to be, and some Native reporters are relieved that the decision stopped short of striking down the law completely – especially since forced adoption may not be so historic, after all. The case has been returned to South Carolina Courts for further discussion. Baby Veronica's future still remains to be determined.