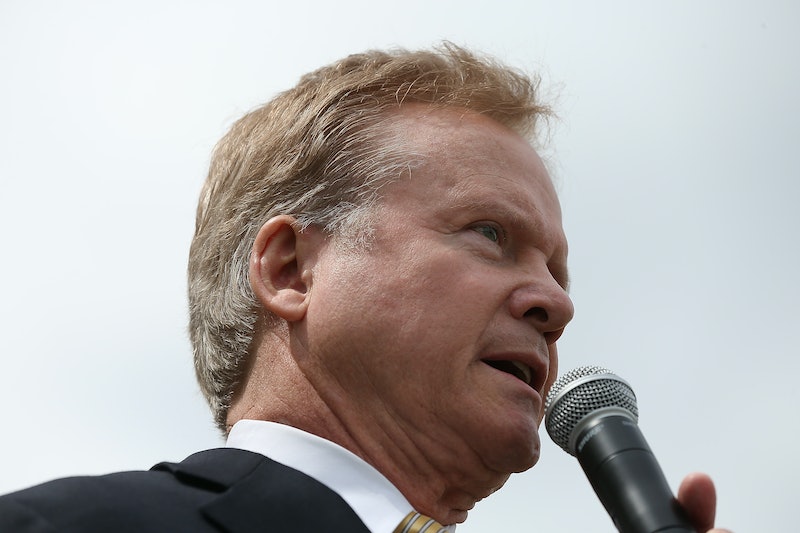 Jim Webb, the newest Democratic candidate for president, holds pretty liberal views on social issues. He supports gay marriage, thinks weed should be decriminalized, and is all for a higher minimum wage, but what is Webb's stance on reproductive rights? Unlike Bernie Sanders and Hillary Clinton, Webb hasn't specifically spoken about women's reproductive rights, but his voting record and history on the issue prove that he's an ally for women.

I look forward to hearing an official statement about Webb's opinions on reproductive rights and what his platform on women's issues will be, but for now, we can rest assured that he supports widespread access to birth control and legal abortion. The most straightforward answer about Webb's opinion on abortion comes from a 2006 article about Webb's Senate campaign — The Wall Street Journal said he "backs abortion rights as defined by the Supreme Court's ruling in Roe v. Wade." At the time, Webb said, "I believe the power of the government ends at my front door unless there is a compelling reason to come inside." Essentially, he doesn't think it's the government's place to tell a woman what she can or can't do with her own body.

In an attempt to criticize Webb's actions as a Virginia senator, pro-life website Life News wrote: "Webb did not cast one pro-life vote in his term." What Life News meant as an insult, female Democratic voters will likely see as a good sign. In 2007, Webb voted against an amendment to a Health and Human Services appropriations bill that, had it passed, would have prohibited federal grants being given to organizations that provide abortions, angering many of his Republican constituents. He also voted against a bill that would have made it illegal for minors to cross state borders to have an abortion.

Webb's last fight for reproductive rights as a U.S. senator was in 2012, when he gave a statement officially opposing the Blunt Amendment to the Affordable Care Act, which aimed to allow institutions to deny people certain coverage (i.e. birth control coverage) based on their "conscience." In his statement, Webb said:

The effect of this amendment on its face would be that any stakeholder could decide to deny health care benefits to any individual, on the very loose definition that to provide such care somehow violates a personal definition of one's moral convictions... Quite frankly, it would be the same thing as the Congress saying that not only should religious establishments be exempted from taxation under the doctrine of church and state, but also anyone who has a moral objection to paying taxes should not pay them, either.

While he didn't exactly say he opposed the amendment for the sake of reproductive rights, he still thought allowing employers and insurance companies to deny birth control coverage based on their beliefs undermined the division of church and state and helped protect women's right to birth control. Hopefully, Webb will clue us all in on his specific platforms on abortion and birth control soon.