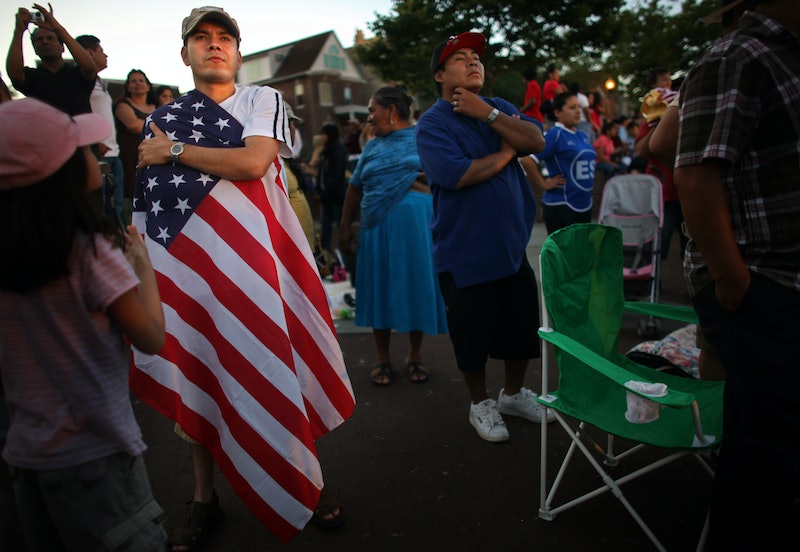 It may shock you to learn that that the United States isn't the only country in the world and that our annual Fourth of July celebrations are not, in fact, a global tradition. Yes, I know, confusing, right? There are actually some countries that don't celebrate our Independence Day — and a few of them may actually dislike the entire premise for that incredible cookout you're hosting this year. Of course, no one can blame them: July 4 is traditionally the day we celebrate that time officially we told Great Britain, "It's not me, it's you." With that in mind, I decided to ask a group of Brits how they really felt about the Fourth of July — and was shocked by their extreme candor.

"Americans are proud of their heritage and delight in the thought of knocking back the might of the British Empire over 230 years ago," wrote The Guardian's Saptarshi Ray in an op-ed back in 2007. "British perception of the Fourth of July festivities is generally equal parts bemusement and sneering ... Those Americans, they love to wave flags and shout 'awesome!' at any excuse, don't they?"

Okay, he's not wrong (we do love to say "awesome"). But one man's opinion should never stand for another's and I was determined to suss out exactly what the average Brit really thought about all the flag-pants, hot dogs, and middle-aged men standing around an open flame with sleeveless eagle-tees.

Here's what they told me:

"I mostly find it amusing," said Keane. "It's just like an explosion of Red, White and Blue coming from a country that already puts its flag everywhere on a normal day." She then added, "Happy Freedom Day, America — enjoy your guns and expensive healthcare," and proceeded to send me a photo of Captain America.

"I have just about no opinion on it, and would forget it was a thing apart from my Twitter, Instagram, and Facebook feeds filling up with posts from Americans," White explained. "On the whole, the posts are people having a good day and feeling good about life — which is a nice thing." She added that "most Brits are ambivalent about" the holiday in general (are you ambivalent about FREEDOM too, Claire?!).

"I'm mostly amused by it — I've had some [ridiculous] questions [from Americans]," said Clapham. "Some were actual, legit questions, some were my friends purposefully being silly ... Given that Americans are already super patriotic on a normal day, I consider the 4th of July to be the equivalent of turning it up to 11."

"I live in the States, and I've always quite enjoyed joining in on celebrating America's independence from, well, people like me," Hollander quipped. "I buy all this American flag apparel — sunglasses, T-shirts — and get really into it. Bit weird, now I think about it...."

"I'm largely ambivalent about it [but] I'm amused at how many Americans every single year ask me, 'Do you have the 4th of July in England' (no, we go directly from the 3rd to the 5th), or 'Do you celebrate Independence Day in England' (just take a minute to think about that honey, I'll wait)," Winters joked. "Mostly it's just 'Eat Hotdogs, Drink Shitty Beer, and Watch Southland Tales Day' for me."

Keeping it short and sweet, Clapham replied, "I couldn't give a stuff, it's about as important to us as Bastille Day."

That's the spirit! Now go get yourself a crumpet.

Malm may not be a born-and-bred Brit, but after living there for some time, she's just as curious about the raucous July 4 celebrations as the rest of them.

"To be honest, even though I know the United States celebrates Independence Day on July 4, it would probably slip my mind if I didn't see different posts on social media on the day," she admitted. "And when I hear the words 'Independence Day' I really can't help thinking aliens and '90s films... Sorry."

Never apologize for that movie, Madicken, it was incredible.

It seems that Brits largely remain confused, perplexed, and intrigued by Americans each year on July 4 — not that that's surprising. We did send George Washington and Ronald Reagan to steal all their tea and throw it into King George's pool 50 years ago or something, so they're probably still a little dazed.