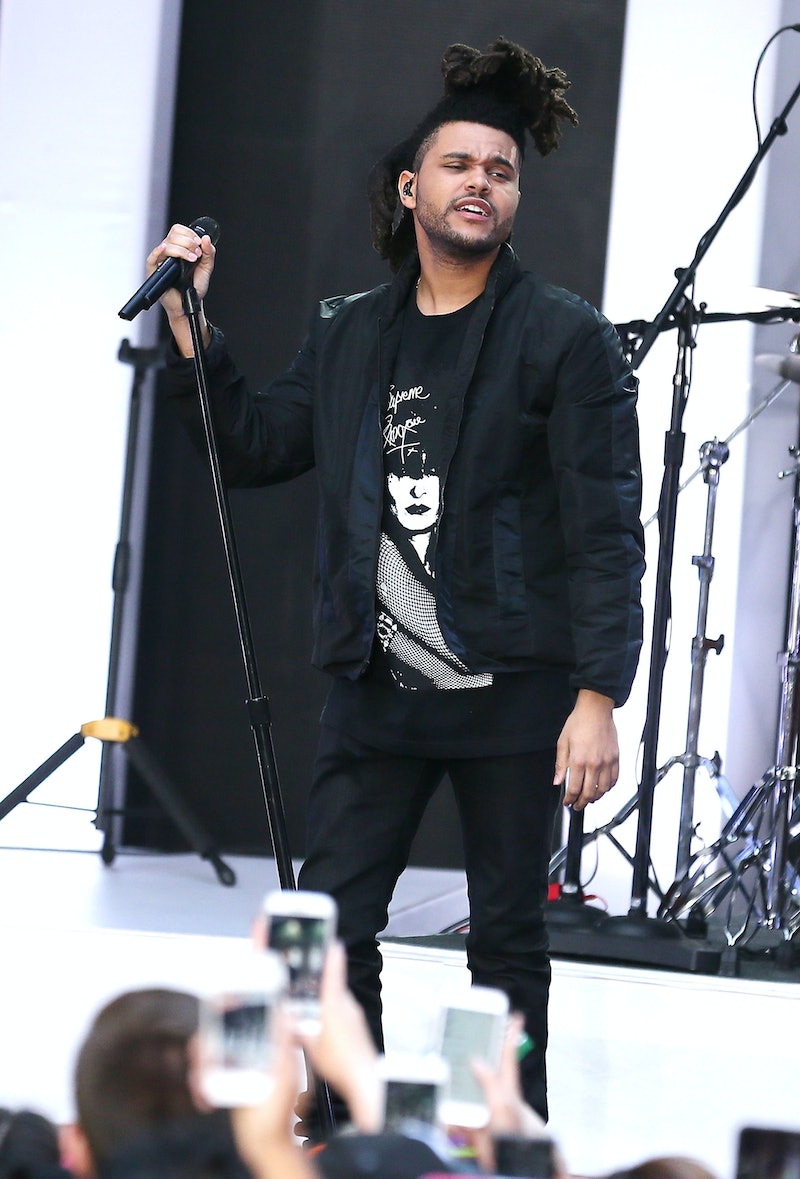 The greatest gift the 50 Shades of Grey movie has given us is turning The Weeknd into a music superstar with his hit soundtrack single "Earned It." Previously, he always kind of roamed under the radar with some recognizable songs. But now, I'm calling it: "Can't Feel my Face" By The Weeknd is the official song of Summer 2015. I know this is a big honor to bestow, but this song has got it all: Fun, funky, catchy, and it sounds like Michael Jackson. Plus, the single was released on June 8th and it's already climbed to 6th on the Billboard Hot 100 chart, noted for its large gains in sales and airplay within just a few week.

This song seriously came out of nowhere, even though "Earned It" emerged as a hit this past Spring. But most early predictions for the song of the summer made back in May didn't include "Can't Feel My Face." iHeartRadio's Marissa Morris has written about her picks, which have included "Bad Blood" by Taylor Swift and "Cheerleader" by OMI, but mentioned The Weeknd as someone to watch. In April, Deadspin sounded dead-set on the fact that Fetty Wap's "Trap Queen" would rule the summer. While those are all amazing and very popular tunes, "Can't Feel My Face" is winning this race and taking the season by storm.

Here are all the reasons why you should give The Weeknd the Song of the Summer 2015 crown already:

1. The Title Is Mysterious

Wait, why can't he feel his face? Have they been kissing so much that they're numb? Did one lover punch the other and that's totally their thing? Is he just smiling 24/7 due to this new love? Or is it a drug? Is love the drug? I could go on all day with this or I could just sit back and enjoy the song. I'll take the latter.

2. It's Perfect For A Summer Fling

The lyrics describe a love affair that isn't the best idea in the long run, but hey, it's super fun in the moment. We've all been there — including Maroon 5, apparently. But "Can't Feel My Face" is a less devastating fling than the one described in Maroon 5's "This Summer's Gonna Hurt."

It's the perfect song to get the dance party started at a summer soiree.

And that's never a bad thing. We all should've seen this coming, though. The Weeknd did a killer cover of MJ's "Dirty Diana" (above) a few years ago and it just slays.

5. It's Produced By Hit-Maker Max Martin

We can thank the Swedish pop master is the man behind other earworms like Taylor Swift's "Shake It Off" (and 1989, pretty much), Maroon 5's "One More Night," Katy Perry's "Teenage Dream," and many more. It's no wonder "Can't Feel My Face" is ruling the radio.

6. It Was Originally Written For Justin Timberlake, Says The Rumor Mill

According to USA Today, rumors have been swirling that this track was intended for JT himself. It definitely seems plausible, but hey, it belongs to The Weeknd now.

7. There's A Disco Breakdown In The Chorus

8. It Has A Positive Energy

A lot of songs this summer are pretty dark. Adam Levine sings about a painful torrid summer fling in "This Summer's Gonna Hurt." Swift has a feud with someone in "Bad Blood." OMI's "Cheerleader" sounds like the narcissist's theme song. Justin Bieber, Diplo, and Skrillex bring Tropical House beats and longing for a lost lover in "Where Are U Now." Rihanna's "Bitch Better Have My Money" is a demand for money right now.

"Can't Feel My Face" seems to be the lone optimistic and positive summer tune out there. So blast it loud and proud — until you can't feel your face, perhaps.

More like this
'The Summer I Turned Pretty' Using “Cruel Summer” Has Twitter Begging Taylor Swift To Release A Music Video
By Radhika Menon
What Is Ariana Grande's Net Worth? When It Comes To Money, She Has No “Problem”
By Hugh McIntyre
Taylor Swift's “Carolina” Theme For 'Where The Crawdads Sing' Soundtrack Is Here
By Jake Viswanath
Taylor Swift Fans Caught A Possible ‘1989’ Clue In Her Latest Awards Show Speech
By Grace Wehniainen
Get Even More From Bustle — Sign Up For The Newsletter