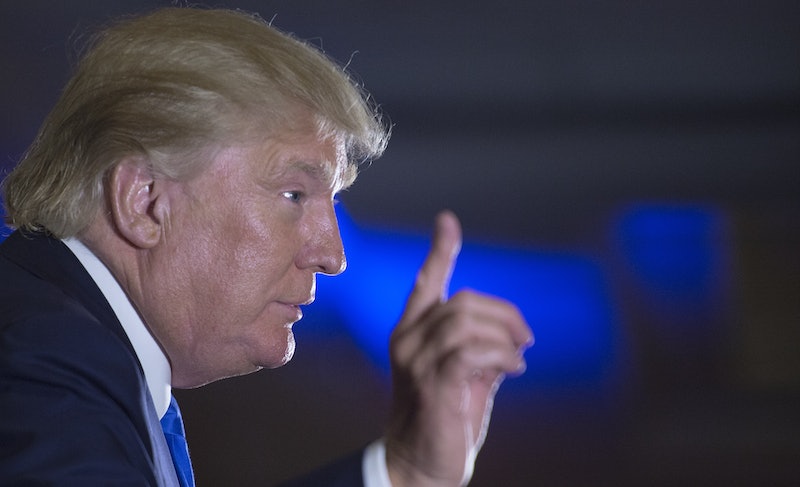 Since announcing his official 2016 candidacy on June 16, billionaire business mogul Donald Trump has run the gamut from characteristically egotistical to downright mean. In his kick-off speech alone — which lasted nearly 45 minutes — Trump blasted everything from Democrats to immigration, hinting at a vague plan to defeat ISIS and generally stirring up trouble with his rivals. After refusing to back down from controversial statements he made regarding Mexican immigrants (whom he called "drug users" and "rapists"), Trump was quickly dropped from several large partnerships this week, including having his reality television contest, The Apprentice, yanked from the airwaves over at NBC. With the widespread damage he's brought upon himself, his fellow GOP contenders and leadership figures are now questioning whether Trump is helping their cause or hurting it.

"Donald Trump is like watching a roadside accident: Everybody pulls over to see the mess, and Trump thinks that’s entertainment," said former Bush administration press secretary Ari Fleischer, in comment to Politico in June. "But running for president is serious, and the risk for the party is he tarnishes everybody."

Now, despite a major bump in the polls, Trump has come under fire again from his own party, with some accusing him of being hurtful to the GOP's end-game.

The Federalist founder Ben Domenech told CNN recently that Trump was hindering any efforts by moderate conservatives who had tried to reach across party lines to minority and female voters.

"Donald Trump's comments are hurtful for the cause of Republicans who want to reach out not just to Latinos but across many different ethnic barriers," said Domenech on Thursday. "The problem with those comments is made worse by the fact that people will continue to confuse Trump with a Republican, which he is not, as opposed to thinking of him as an entertainer, which he is."

So far, Trump has maintained a stranglehold on the polls, with a recent Quinnipiac University survey placing him solidly at 10 percent of the prospective vote, neck-and-neck with former neurosurgeon Ben Carson, and second only to Wisconsin Gov. Scott Walker, who came in at number one with 18 percent of the vote.

"[Trump's] early showing worries many party leaders," Quinnipiac Assistant Director Peter A. Brown explained in a press release on Wednesday. "They see him as a potentially disruptive force."

Trump's rivals have largely been split between buttressing the outspoken billionaire's curious stances and slamming him in an attempt to win back the party. Florida Sen. Marco Rubio, whom Federalist contributor David Harsanyi once called "the GOP's best hope", has made it clear that he was no fan of the brash businessman, calling Trump's comments on Mexican immigrants "offensive" and "inaccurate." In a statement on Friday, Rubio elaborated:

Our next president needs to be someone who brings Americans together – not someone who continues to divide. Our broken immigration system is something that needs to be solved, and comments like this move us further from – not closer to – a solution. We need leaders who offer serious solutions to secure our border and fix our broken immigration system.

Immediately, Trump responded to Rubio's assertions, calling the Republican senator a liar and an amnesty shill who had "zero credibility," in a email statement to Breitbart news on Saturday morning.

"I think that was a huge error on his part and, number one, it’s wrong," said Perry to the Your World host. "He painted with a very broad brush. ... We want somebody who has actually dealt with this before, not somebody that’s just going to shoot from the hip."

A few of Trump's fellow GOP hopefuls, however, came to his aid. Texas Sen. Ted Cruz, who has been meandering up and down the middle of the polls since April, on Tuesday told Fox News that he actually liked Trump and supported his early focus on immigration.

"I think he's terrific, I think he's brash, I think he speaks the truth," said Cruz. "He has a way of speaking that gets attention, and I credit him for focusing on an issue that needs to be focused on."

How far Trump's braggadocio and incendiary rhetoric will take him over the next six to seven months is yet to be determined. For now, it seems, the GOP will simply have to play nice and hope his sudden popularity fizzles out soon.