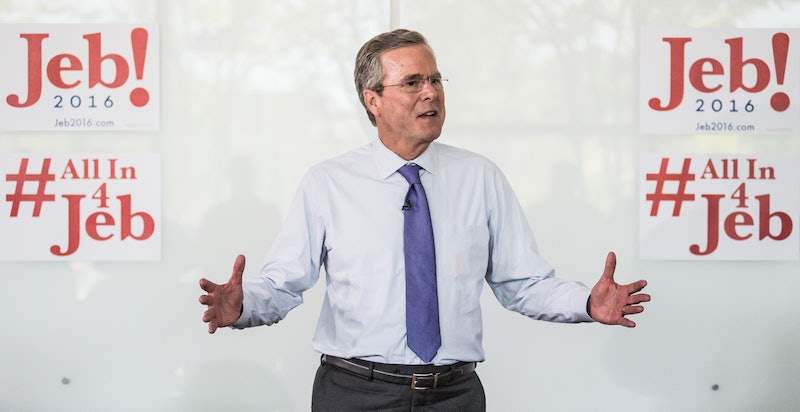 Whether or not the Republican primary field will ultimately be hurt by ex-reality TV star and business mogul Donald Trump's participation, you have to imagine they appreciate the chance to focus on someone else's gaffes for a while. On Saturday — Independence Day, appropriately enough — one of the GOP field's legitimate contenders let a few punches fly. Former Florida Governor Jeb Bush condemned Donald Trump's immigration rhetoric, calling it "ugly," and making it clear that he took it personally.

For those of you who aren't aware of Trump's highly controversial remarks, it all went down during his presidential announcement speech. Despite being one of the rare moments when a campaign can stay on-message pretty easily — you can give a tightly scripted speech with no questions, after all — Trump let some words slip on Mexican immigration that have widely been criticized as racist: "They’re sending people that have lots of problems. ... They’re bringing drugs. They’re bringing crime. They’re rapists."

He followed up with "... and some of them, I assume, are good people," but by that time the damage was done, and he's been feeling the heat on multiple fronts — losing out on business relationships, taking fire in the media, and getting hit by his political rivals. Former New York Governor George Pataki, himself a long-shot 2016 candidate, has repeatedly called on Twitter for Republicans to denounce Trump's remarks, and it seems that Bush was more than willing to answer the call.

Speaking after marching in an Independence Day parade in New Hampshire, Bush made his feelings plain, as detailed by The New York Times.

To make these extraordinarily ugly kind of comments is not reflective of the Republican Party. ... He’s doing this — he’s not a stupid guy, so I don’t assume he thinks that every Mexican crossing the border is a rapist. He’s doing this to inflame and incite and to draw attention, which seems to be the organizing principle of his campaign.

Even though Bush has obvious political incentive to take a swipe at Trump, it makes sense why such racially charged comments would cut close to the bone for him. He's been married to his wife, Columba Bush, a Mexican-American woman, for over 30 years.

The two have a trio of biracial children — John Ellis Bush, Noelle Bush, and George P. Bush, the latter being the current Texas Land Commissioner. He's also been much more conscientious about addressing the Latino community throughout his career than most all of his Republican contemporaries, having referred to illegal immigration as often being an "act of love" last year, as The Washington Post detailed at the time.

Yes, they broke the law, but it’s not a felony. It’s an act of love. It’s an act of commitment to your family. I honestly think that that is a different kind of crime that there should be a price paid, but it shouldn’t rile people up that people are actually coming to this country to provide for their families.

That's obviously a far cry from the kind of tact Trump's been taking on the issue. It'll be interesting to see whether other members of the GOP field start speaking out more forcefully about Trump's inflammatory rhetoric — as The New York Times pointed out, New Jersey Governor Chris Christie gave a considerably softer answer on the situation, saying that he liked Trump and that "these are his choices."

For Trump's part, he hasn't backed down — the words "back down" seem pretty far from his vocabulary in a general sense. He doubled-down on his remarks in a recent interview with CNN's Don Lemon.