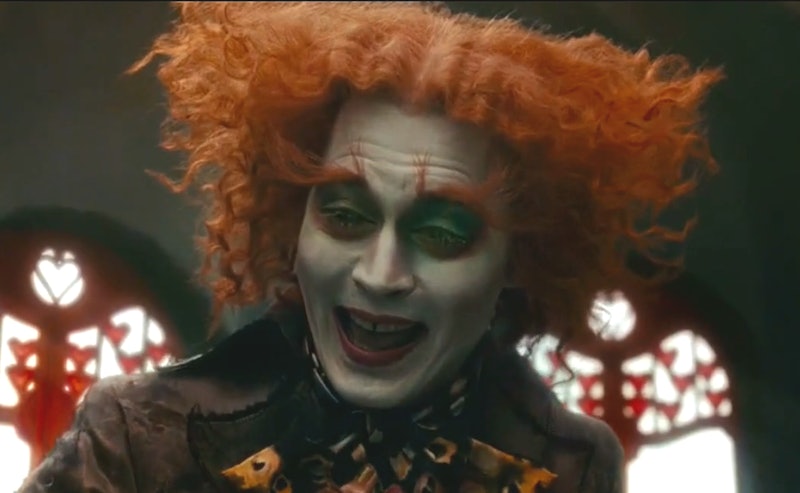 It might be about time to break up with your life-long movie boyfriend. Johnny Depp is officially starring in Alice in Wonderland 2 along with lovely actress Mia Wasikowsa (whose talents are much better suited for wicked roles like that in Park Chan-wook's Stoker). Depp will officially do anything Disney asks him to do. First, there were unnecessary Pirates of the Caribbean sequels, then came the Mad Hatter and his Futterwacken (more on that in a minute), and then came the regrettable Tonto. The idea that Depp is returning to any of these roles is utter madness — it's even more infuriating than that year he starred in Secret Window.

But it's happening, because the studio has made it so. For those of us who are stubborn enough to still hold out hope that some shred of enjoyment can still come out of seeing Depp on the big screen (though that 21 Jump Street cameo was fun, I must admit), there is a way to process the news and remain positive. It doesn't happen often, but there are rare occasions in which a sequel can improve upon the mistakes in the first film. Let's hope (for the sake of every other Depp movie I own) that Alice 2 is at least more fun than the last one.

Acknowledge the absurdity of Depp's return.

We have not gone mad, but we can't say the same for Johnny.

Remember this isn't all there is.

You can always return to the Louis Carroll book or the lovely little cartoon version.

Dive right in and don't look back.

Know that Tim Burton is going to make you question your sanity for at least an hour.

Okay, maybe more than an hour.

But that if he brings back that damn barely hip-hop jig he calls the Futterwacken...

we won't know what to do with ourselves.

But perhaps, at the end of the day, we should have known better.

Alice in Wonderland 2 is slated to hit theaters Memorial Day weekend 2016. Let's just hope we're wrong and that it doesn't leave us floating in a sea of our own tears. We don't fit in tiny jars like Alice after her special medicine.