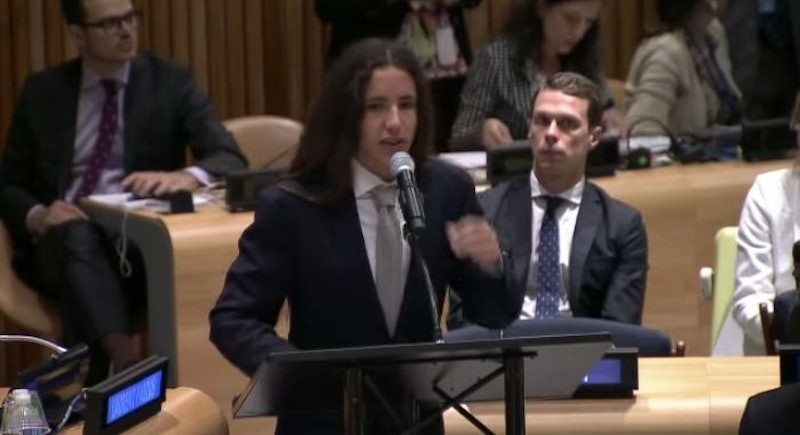 Xiuhtezcatl Roske-Martinez might be a young climate activist at 15 years old, but in a speech to the United Nations General Assembly, he said his age is exactly why he became an activist for this issue. Roske-Martinez was raised in the Aztec tradition in Colorado, and he says he learned from his father "that all life is sacred." But he learned that it's especially sacred for his generation, which could face the effects of climate change brought on by generations before him. The 15-year-old spoke at a UN climate change meeting, and his best quotes show why climate change is something we need to address now.

Roske-Martinez starts out by saying that he thinks it's amazing that almost 270 countries are represented at the UN General Assembly, "because it's really going to take united action from all of us in order to make a difference," according to a YouTube video of the speech.

The teenager is the youth director of an organization called Earth Guardians, and he's worked with young people around the world "to protect our Earth, our air, our water, our atmosphere for my generation and those to follow," according to the video. He was selected to speak at the UN from 200 applicants, according to EcoWatch, and his speech showed why. During the speech, Roske-Martinez doesn't look down at his notes once. Instead, he looked the representatives in the eyes and spoke passionately about why "it is our responsibility to respect and protect that which gives us life."

Roske-Martinez said he saw his world start collapsing around him, and the realization that the collapse was caused by human action forced him to start campaigning for change, according to the video:

For the last nine years since I was six years old, I've been on the front lines of climate and environmental movements standing up to fight for my future and for our planet. What a lot of people fail to see or seem to ignore is that climate change isn't an issue that's far off in the future. It isn't slowly affecting the ice caps in the poles or the sea-level rise in our oceans. It's affecting us right here, right now, and will only continue to get worse.

He said he saw the real effects of climate change, and that certain populations will feel those effects more than others, which is what makes climate change a human rights issue:

In a three month period, my family and I, we witnessed the greatest wildfires and the worst floods that we've ever seen in Colorado history. Frequency and severity of massive storms and massive floods, massive super storms, are increasing all over the planet because of our lack of action — because of the increase of carbon dioxide emissions, because of the way that we are living. And, because of this, young people are standing up all over the planet, because we see that climate change is a human rights issue. It is affecting, especially, developing countries, women, children, and people of color more than anyone else.

Brilliantly, Roske-Martinez said that the environment isn't what's really at stake. And if arguments about the planet and why it's beautiful, diverse, necessary, etc. don't persuade you, then arguments concerning the survival of your own children should:

What is at stake right now, what we are fighting to protect, what is in your hands, what is in our hands today is the survival of this generation and the continuation of the human race. That is what is at stake.

He said that citizens are starting to take action. More than 400,000 people attended the climate march in New York City in September, making it the largest climate march in history. Roske-Martinez said more than 220 institutions have divested from fossil fuels with the help of student-led movements. But, now, we need serious legislative action:

We are approaching 21 years of United Nation climate talks and in the last 20 years of negotiations almost no agreements have been made on a bonding climate-recovery plan. Our window of opportunity to take action is shrinking as the problem exponentially increases. ... Because, as I said, what's at stake right now is the future of your children, our children, my children.

He said that fossil fuels need to be abandoned. According to the U.S. Environmental Protection Agency, 26 percent of 2004 global greenhouse gas emissions came from our energy supplies (coal, natural gas, and oil). He said we have better energy solutions:

It's time to look to the skies for the solutions that we need. Because the future of energy is no longer down a hole. We need to reconnect and end this mindset that we have that we can continue to take whatever we want without ever giving back or understanding the harm that we are doing to the planet. It's this mindset of destruction — of greed — that is tearing apart our planet. ... We have to remember that we are all indigenous to this earth and that we are all connected.

We are being called upon to use our courage, our innovation, our creativity, and our passion to bring forth a new world. So, in the light of this collapsing world that we see, what better time to be born than now? What better time to be alive than now? Because this generation, the people in this room right here, we get to change the course of history. Humans have created the greatest crisis that we see on the planet, and the greater the challenge, the higher we'll rise to overcome it. ... I don't want you to stand up for us — I want you to stand up with us.