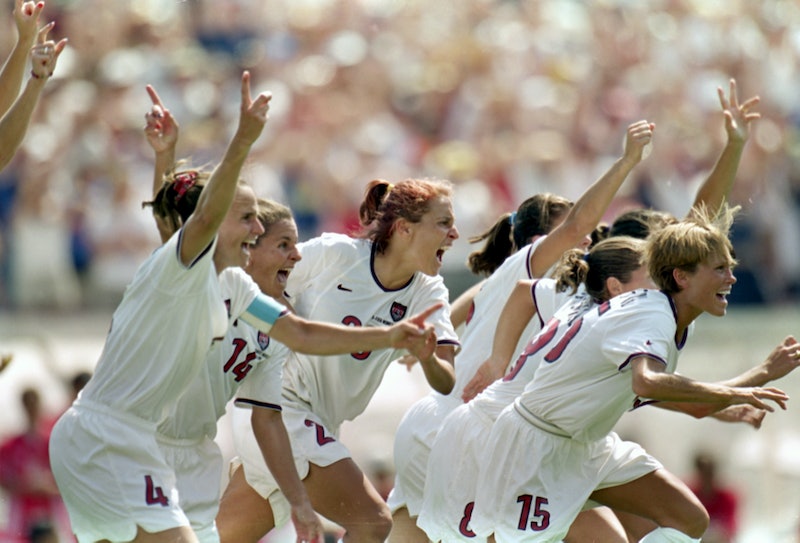 The FIFA Women's World Cup final is Sunday night. Fans around the world are eagerly preparing for what promises to be an exciting rematch between the United States and Japan, two teams that faced each other in the last Women's World Cup finals four years ago. It was a penalty shootout following the lapsing of extra time that resulted in Japan's first World Cup win in 2011. The U.S. last won the Women's World Cup in 1999, a full 16 years ago. Veteran striker Abby Wambach would've been entering her sophomore year of college at the University of Florida when the women's team bested China in an epic 5-4 penalty shootout.

1999 was a pivotal year for women's soccer, especially in the U.S. The FIFA Women's World Cup was only entering its third tournament, having started in 1991. The U.S. won the inaugural World Cup against Norway in a 2-1 bout held at China's Tianhe Stadium, a somewhat large stadium with a capacity of 60,000 people. In 1995, the U.S. placed third and it was Norway who ended up winning it all against Germany in a 2-0 shutout. But 1999 was a whole different story — held in the iconic Rose Bowl in Pasadena and attended by a record crowd of more than 90,000 fans. The amount of growth based on stadium capacity alone points to an over 150 percent increase in attendance for the final game.

The U.S. Women's soccer team had previously won gold at the 1996 Olympics, setting the scene for a dominating World Cup run that saw them allow just three goals during regulation play, thanks to expert playing from goalie Briana Scurry. Their final game contained no scoring whatsoever until a penalty shootout commenced. Even then, the U.S. narrowly won via a Brandi Chastain's goal that not only cemented the team's dominance but empowered women the world over. Chastain's celebrity further rose via her "sports bra celebration" in which she ripped off her shirt and twirled it above her head after seemingly doing the impossible: making her first penalty kick in professional competition with her non-dominant foot. Kicking with her left foot was a strategic move that seriously paid off, while celebrating with a full force of emotions showed just how meaningful a Women's World Cup win can be.

That moment has truly set the scene for this year's FIFA World Cup Final. Wambach and the current U.S. roster all had Chastain, Scurry, iconic forward Mia Hamm, and an entire Olympic gold medal-winning team as role models. The entire country is once again enamored with women's soccer and wholeheartedly in support of the U.S just as they were in 1999. According to William Hill, an online sports betting service, fans are now putting their money where their mouths are and 95 percent of the bets wagered for the final are in favor of the U.S. team.