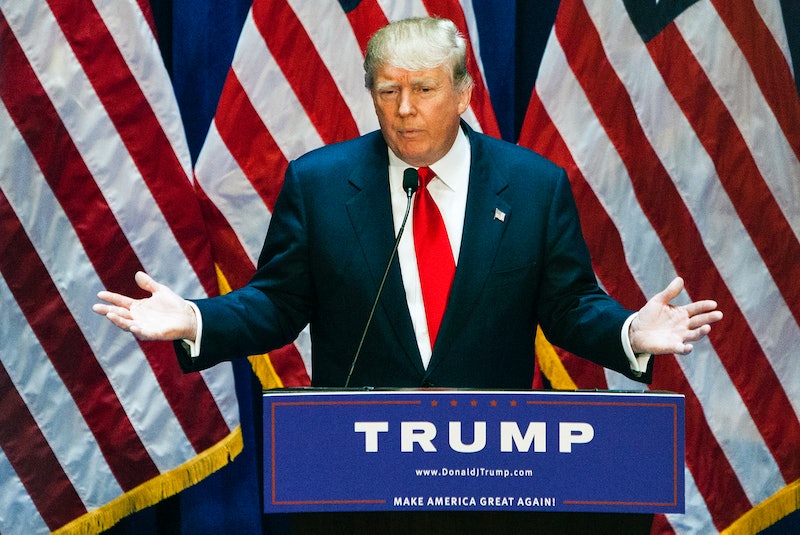 I think it's pretty clear by now that Donald Trump doesn't care what people think of him. At least if he did, he might consider deleting his crazy Twitter account, avoiding all television appearances, and supergluing his mouth shut forever after that semi-disastrous presidential announcement speech last month. And would-be voters aren't the only ones who are pissed by what was said. Jeb Bush voiced his anger over Trump's racially offensive remarks this week, too, according to The New York Times — joining countless other candidates who've come forward to dismiss The Donald's racism-laden speech.

In case you're just catching up, in his June 16 announcement speech, Trump landed himself in some major hot water after basically saying that all Mexicans were rapists and drug runners. (Yes, really.) The comment came up while talking about his feelings about U.S. immigration policies, and he blurted out, "They're sending people that have lots of problems. ... They're bringing drugs. They're bringing crime. They’re rapists."

Needless to say, Trump immediately faced widespread backlash for that one — from the Mexican-American community, as well as from popular business partners and investors. (In fact, Trump's comments cost him to lose ties with NBCUniversal, Univision, Macy's, and more, in the wake of his comments.) But he also sparked some major ire in fellow Republican candidate Jeb Bush, who came forward to say he takes personal offense to Trump's speech. And that's no surprise — his own wife is Mexican, and the couple share three children who proudly celebrate their biracial heritage. But Bush also didn't appreciate just how badly Trump's ignorant words make the GOP look. "To make these extraordinarily ugly kind of comments is not reflective of the Republican Party," said Bush.

To that, The Donald did not remain mum. Trump released a statement following Bush's comments, saying:

Today, Jeb Bush once again proves that he is out of touch with the American people. Just like the simple question asked of Jeb on Iraq, where it took him five days and multiple answers to get it right, he doesn’t understand anything about the border or border security. In fact, Jeb believes illegal immigrants who break our laws when they cross our border come "out of love."

While some Republicans have continued to stand by Trump in the wake of the controversy, many more are distancing themselves from the mogul in addition to Bush. Here's a quick rundown of just how other candidates are responding to the statement and, in turn, what they think of the confounding enigma that is The Donald:

Just like Jeb Bush, Marco Rubio found fault with Trump's remarks. As The Guardian reports, Rubio finds the divisiveness of Trump's comments to be the most damaging part of it all — and that's pretty much the total opposite of what we need in a president. On July 3, Rubio released a statement that said:

It's also no surprise that the Hills wasn't at all on board with the mogul's comments. (And not just because Trump came out and called Hillary "pathetic" last month in the wake of the Charleston shooting.) According to ABC News, Clinton recently referenced Trump's speech in an interview with Jon Ralston on Ralston Live. While she admonished the racial implications behind it, she did not actually name Trump directly. Instead, Clinton said:

I think we have to speak out against (prejudice). Like, for example, a recent entry into the Republican presidential campaign said some very inflammatory things about Mexicans. Everybody should stand up and say that’s not acceptable.

In contrast, Ted Cruz took an... interesting approach to Trump's comments. Cruz was actually somewhat supportive, zeroing instead on the issue of illegal immigration, and ignoring the whole... you know, incredibly racist part of what Trump said. He also made it pretty clear he wants no part in criticizing fellow Republicans. (So apparently they can say whatever they want, and Cruz will be totally on board?) On a July 5 airing of NBC's Meet The Press, Cruz said:

New York Gov. Pataki, however, immediately called upon the GOP to denounce Trump's comments following the speech. In fact, Pataki reportedly sent a letter to other Republicans, asking them to join him in condemning Trump over the remarks. Yep; no partisan bias here. According to CNN, the letter read:

The last week of news coverage over the language used by Donald Trump to describe Mexicans has left me and a lot of other sensible people wondering what century we are living in.

Although Carson doesn't seem to have made any public remarks about Trump's comments specifically, the retired neurosurgeon and current GOP presidential candidate doesn't seem to be too offended by The Donald. In fact, he said he welcomed sharing the race with him. According to The Washington Times, Carson said when the fellow Republican joined the campaign:

He's obviously a man of significant accomplishment, and we have a process whereby a lot of different individuals will have an opportunity to place forth their vision of what America should be, and we can analyze that vision with respect to what they have done in their lives and make a decision — that’s the beauty of the American political system.

Perry didn't miss out on the Trump-bashing fun, either, jumping in to say he too disapproved of the comments. However, it's hard to buy how truly bothered he was by the remarks, considering Perry has landed himself in his own racial controversies. Back in 2011, it surfaced that the name of Perry's family ranch contained a racial slur. When it comes to Trump's words, though, Perry told ABC News' This Week:

The fact is that I've said very clearly that Donald Trump does not represent the Republican Party. I was offended by his remarks.

Like many other Republicans, Santorum took the approach of straddling positions on this one. While he said that he didn't agree with Trump's comments, he qualified by stating that he does approve of the focus on illegal immigration. In an interview with CBS' Face the Nation, Santorum said:

The vast majority of people coming legally into this country from Mexico and other places are people who want to do the right thing. People who are coming illegally obviously are coming with a bad intent, let's just be honest. They're coming in with the clear intent of breaking the law.

New Jersey Gov. Chris Christie is definitely no stranger to controversy himself — his outspoken ways have landed him in plenty of hot water himself for years. According to The New York Times, Christie did not support Trump's remarks, but perhaps empathized a bit with his fellow candidate, because he stopped himself from unleashing any harsh criticism. Instead, Christie said simply:

I like Donald. He’s a good guy. And as I said right from the beginning, he’ll be as serious a candidate as he wants to be. Those are his choices.

Hmmm... it's good to know that at least Trump will always have a friend in Christie. Maybe we'll see a Christie-Trump ticket, come 2016? (Just kidding — that's a pretty scary thought.)