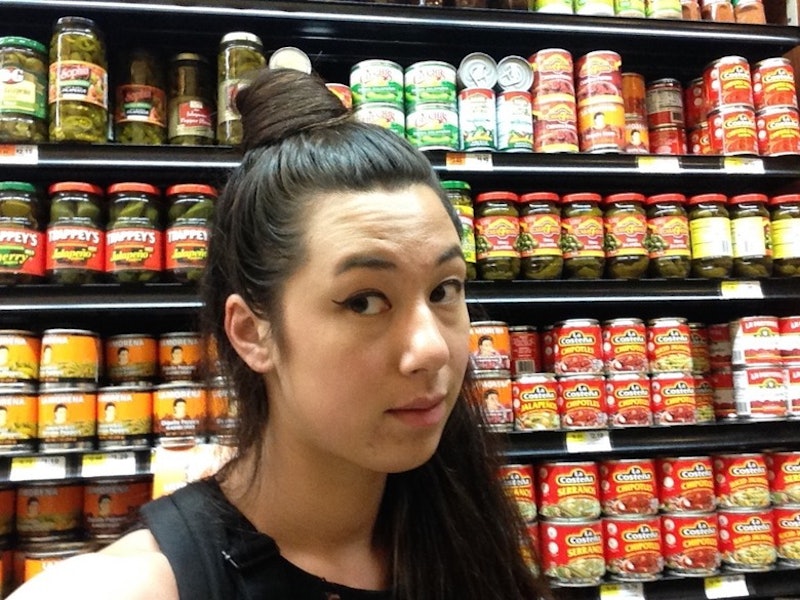 I already wear a top knot everyday, so I'm really into this half up top knot that's been trending on the Internet. As spotted on street style superstars like Khloe Kardashian and Sienna Miller, the look is exactly what it sounds like: Half of your hair is up in a top-knot while the rest of it flows free. But is this a look you can rock IRL? (Even Kardashian expressed some doubt about the style initially, for the record.) Or is it one of those hairdos that seems great on Instagram but is actually hard to pull off without help from a professional stylist?

I decided to find out, and figured that if I could make it work, almost anyone could because I've never been one to really play around with my hair. I don't have the patience to curl it or whatever you do to long hair to style it, and instead just throw it up on top of my head. The top-knot is easy, and I love it, but change can be good sometimes, and I figured the half-up top-knot would be an easy way for me to broaden my hairstyling horizons. How much harder could it be to do half of a top-knot instead of a whole top-knot?

So here's what happened when I tried the half-bun to see if it would be my new go-to hairdo, and if it really works IRL:

The first place I decided to rock the half-bun was Bryant Park, where I was meeting my friend for happy hour drinks. But really, the process started in my bathroom, about an hour before I had to be at the bar, where I spent 20 minutes grabbing different sections of my hair and throwing them on top of my head, trying to make the look work. The technique itself was pretty straightforward, especially with my years of top-knot experience. The hard part is trying to figure out how much hair needs to be up versus down, and where to place that little bun on your head so it looks like a bun rather than a strange protrusion or sawed-off rhino horn. After several failed attempts, I finally found a ratio I was happy with and ran out of the house. Looking at the photos of that day, I think the bun was almost too perfect; I got the proportions right but it looks too put-together to really be on-trend.

I don't think it helped that I felt pretty out of place at happy hour. Some of that was my own insecurity and anxiety about what my hair looked like, what people were thinking, whether I had done it correctly. The new hairdo felt like a super trendy costume I was trying out, which was in stark contrast to the bar's vibe, which was all office workers in suits and ties. My friend liked it though, saying that it's not a look she thought she could pull off, especially not at her office, but that it worked for me. I wasn't sold, so felt a little self-conscious throughout pomegranate margaritas.

My confidence was also not boosted when I realized that my top-knot game will never be as strong as Gertrude Stein's:

I was pretty impressed the half-bun stayed in place the whole time, even if I wasn't super comfortable.

I didn't have any events or meetings scheduled on the second day, so I wore the half-bun around the neighborhood while running some errands. I was a little quicker in finding the right ratio of hair up to hair down, but, again, the bun looked a little too neat.

As I bounced around from the coffee shop to the grocery store to the bodega, my bun stayed in place. The only time it became annoying was when I was taking a bag of groceries home. Having to swat my hair off my neck while balancing my groceries on my knee as I tried to open my front door made me wish I was just wearing a regular top-knot. I did get heckled on the street, but that could've been more of a function of my crop top than my hairdo. (Let me also say, though, that if you ever want to feel like a genie, this hairstyle paired with a crop top will put you well on your way.)

Working Out At The Gym

I figured the best test of this hairdo's practicality would be at the gym, and by day three, I had the half-bun down. To be honest, this is my favorite iteration, and it feels like a shame that I only wore it to the gym. But I think it looked so perfectly proportioned and casually messy because I wasn't thinking about it too much. Take notes, folks.

Tragically, the good hair day did not last for long. This is what I looked like after running on the treadmill for 25 minutes:

The bun slipped down. The back of my neck got sweaty, and hair was sticking to my skin. Running with a half-bun wasn't working for me, my hair, or my workout. I would not recommend this to anyone who's even pretending to take going to the gym seriously.

Taking The Train From Grand Central

I threw this half-up bun as I was running out the house to get on the subway to catch a train out of Grand Central on the Fourth of July. It's a little bit lopsided, erring on the side of too messy, but the proportions were good.

I felt pretty good about the look while walking through Grand Central and sitting on the train, but once we got to my friend's family's party in Westchester County, again, my hairstyle felt out of place, too trendy. But it wasn't to the point that anyone noticed it but me. The biggest problem was that the second I tried doing anything active (starting with jumping in a bouncy castle, ending with swimming in a pond), the bun slipped off the top of my head. Cute, but still not comfortable, not long-lasting, and definitely not practical.

As I sat on a wooden bench on a Sunday afternoon, clutching my red cup full of day-old blood orange margarita, snacking on a jerk chicken kabob with my hair in an appropriately messy half-bun, I thought, "This is it. This is this hairdo's natural habitat." The half-bun lasted all night long, and I even got a couple of compliments from passersby about my outfit, my hairdo, and my jerk chicken kabobs. I finally felt confident in the look, both that I had executed it well and found an appropriate place to wear it, and sat back and finally relaxed.

As someone who's pretty phobic about trying new hairstyles, the half-up top-knot felt like a low-level of commitment, and I do think it looked cute once I figured out how to do it. But did I love it? No. I was constantly worried about the bun falling over or the hair sticking to the back of my neck, and for most situations, I'd rather either throw my hair up and not worry about it or spend the time actually curling my hair and leaving it totally down.

In the same way that I wouldn't wear a complicated updo to the gym or a bedhead ponytail to a black tie gala, I learned there's a time and place for the half-up top-knot. This is definitely not an everyday look (at least for me), and I wouldn't recommend it if you're doing anything active or going to a place with a more conservative or conventional dress code. It's great for hip barbecues, low-key pool parties, and going out at night, when it might feel most comfortable to wear something more daring. I might bust the half-bun out again at the next sidewalk barbecue I go to, but for now, I'm just going to go back to my good old top-knot.

More like this
9 Valentine's Day Hairstyles For 2023 That Look So Dreamy
By Audrey Noble
Blake Lively Debuts Red Hair For The 'It Ends With Us' Film Adaptation
By Olivia Rose Rushing
11 Mid-Length Haircut Ideas To Inspire Your Next Salon Visit
By Carolyn Steber
The Best Beauty Looks Spotted At Paris Couture Week 2023
By Audrey Noble
Get Even More From Bustle — Sign Up For The Newsletter
From hair trends to relationship advice, our daily newsletter has everything you need to sound like a person who’s on TikTok, even if you aren’t.