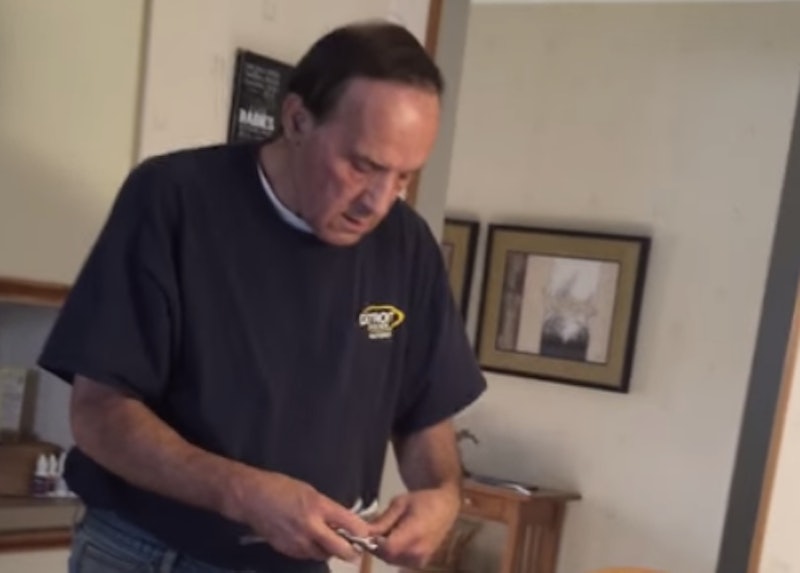 With an estimated 5.3 million Americans living with Alzheimer’s disease, many of us have been directly affected in some way by this devastating disorder. Alzheimer’s is a progressive disease that affects memory, behavior, and cognitive ability; At this time, there is no known cure or mode of prevention. Although the most well-known symptom of Alzheimer’s disease is forgetfulness — which can range from the loss of short-term memory and to the inability to recognize one’s closest family members — it’s important to know that the disease also profoundly effects behavior. A video posted yesterday shows the effect of Alzheimer’s on everyday life, and it’s a heartbreaking look at how the disease incapacitates its victims and reorganizes familial relationships.

The video shows a man diagnosed with moderate Alzheimer’s moving through his day, obsessively going through the motions of doing chores, without fully understanding what's going on. The video’s poster, who goes by the name “volleybrad,” explains in the video’s intro,

I am uploading this to help dispel the notion that Alzheimer's disease just makes you forgetful. … My father clings to some the sense of doing chores, but just wanders around the house constantly doing things like this.

In the video, the father rips paper in half for no apparent reason, and spends an extended amount of time fussing with the pillows and sheets of a bed, picking them up and straightening them, and then picking them up and straightening them all over again. At one point, he attempts to clean a box of kitty litter with his bare hands, at which time his son intervenes and makes him wash his hands. The hand washing is a surprisingly complicated process, as the father has to be reminded repeatedly to wash both, not one, and to rinse the soap off of his fingers. This moment is perhaps the most painful of the video, for it shows how maddening Alzheimer’s is for both father and son: The son has been turned into a caretaker, forced to treat his own father as a child. He says at one point, “I’m sorry. … I don’t mean to treat you like a baby. It’s just you get confused with things.” The father, in turn, seems to be cognizant enough to feel frustrated, and offended by his child’s hovering, but is unable to care for or express himself.

In the video’s intro, the son explains the pain of his father’s slow decline,

I lost my mother to cancer nearly twenty years ago, and I think this disease is far far worse. My dad served his country as a An infantryman in Vietnam and then served as a police officer in the city of Detroit for 15 years …. He does not deserve to spend his retirement like this.

To find out more about Alzheimer’s disease and efforts to find a cure, visit the Alzheimer’s Association.