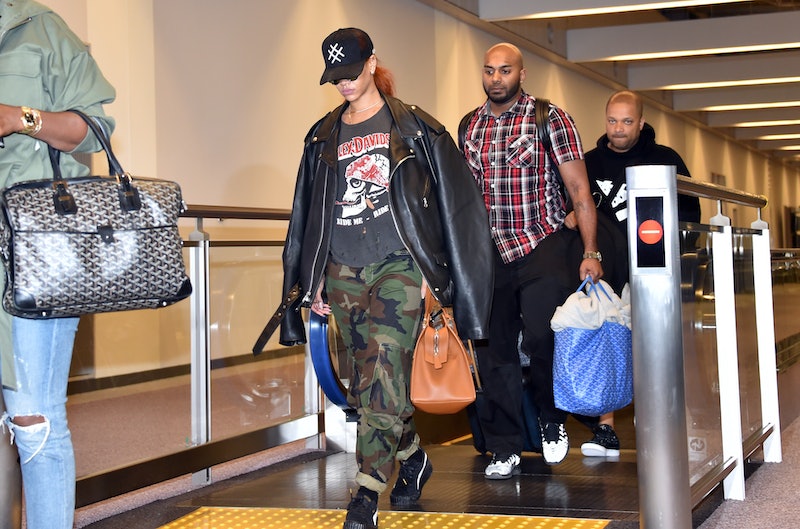 Creating the ideal ensemble for mile-high travels is no menial task, despite what paparazzi pictures of beautifully dressed, vacation-bound celebrities would have you believe. Airport outfits should be comfortable, movement-friendly, and preferably washable for those inevitable moments when unexpected turbulence sends a cranberry seltzer careening towards your carefully curated outfit. However, no one appreciates a frequent flyer clad in musty gym clothes and tattered trainers.

Luckily for jet-setters who spend more time midair than they do on solid ground, there is a chic compromise between comfort and style. Unfortunately, not everyone is blessed with the common sense to understand which items are best left for a night at the local club or a red carpet appearance. If you've had the pleasure of a longer-than-expected layover or flight delay, you've likely witnessed the airport's Worst Dressed List prowling the terminal in velour tracksuits and stiletto heels, or attempting to power through security despite sporting enough metal to pass for a Game of Thrones extra. As a public service to weary travelers, I've compiled a list of the most offensive items one could possibly wear to the airport. Scroll through for the definitive directory of items you should never wear to catch your 747 and remember: A fashion crime is still a misdemeanor, even at the airport.

1. Stiletto Heels You Can't Walk In

There is a time and place for your spikiest stilettos; namely, any occasion that involves minimal movement and a car service to provide an escape when your heels begin to feel more like a torture device than footwear. Stumbling and staggering your way through security, Hudson News, and the line at your departure gate is not only inelegant — it's also an inconvenience for your fellow travelers.

2. Multi-Strap Sandals That Require Herculean Effort To Take On And Off

Nothing is more frustrating when impatiently slogging your way through security than standing behind someone sporting complex footwear they can't seem to remove. Save your multi-strap sandals and gladiators for the beach or the boardwalk, and slip into your favorite pair of flats instead.

3. Any Dress With A Semblance Of A Train

The airport may possess a runway, but that does not mean it is the appropriate place to trot out your red carpet garb. A frock with a billowing train is better suited to a blustery beach than an airport, where it could easily snag on the wheels of your Rimowa luggage and cause a massive traffic pile up.

4. Studded Accessories Of Any Sort

The innate desire to be insurrectionist and rebellious is understandable, but there are ways to exhibit such proclivities at the airport without setting off each and every one of the terminal's metal detectors. Think of your fellow flyers and save your studs for another occasion.

If you can't walk in it, don't wear it to the airport. As sultry as Herve Leger bodycon garb may be, it has no place in a locale where passengers are hurriedly jogging from one place to the next.

Neon terrycloth tracksuits had their 15 minutes in the sartorial spotlight during the early aughts, but no fashion-conscious flier worth her salt would be caught sporting one to the airport anymore. Keep your loungewear in retirement lest you appear to fellow travelers as though you're not aware the year is 2015.

7. Micro-Mini Skirts That Flash More Than A Little Leg

Despite the best-laid plans, travel is often filled with minor inconveniences including but hardly limited to sprinting, lifting heavy items, and standing spread-eagle whilst a security guard executes a mildly invasive pat down. While you may not be able to circumvent security frisking or attempting to stuff your oversized luggage into the overhead bin, you can refrain from unexpectedly exposing more than a length of leg while doing so by eschewing mini skirts at the airport.