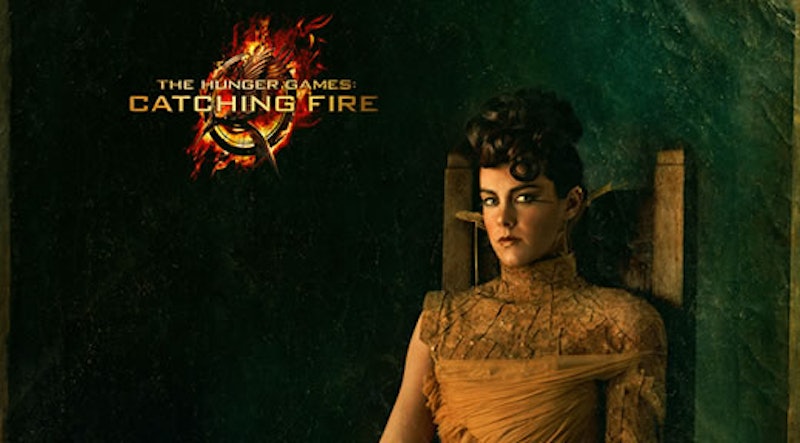 Excuse me? Josh Hutcherson and Jennifer Lawrence? Could you guys step aside? Thanks, because we want to talk about Jena Malone. After seeing Hunger Games: Catching Fire (warming: spoilers ahead), it's clear that the 29-year-old actress is the real star of the movie. As Johanna Mason, the axe-wielding tribute from District 7, Malone shines brighter than that damn girl on fire. From the second she snaps on screen and into that elevator with Haymitch Abernathy, Katniss Everdeen, and Peeta Mellark to her final line in the third ever Quarter Quell, the woman is a commanding and compelling presence that adds just the right amount of bite and grit. Without Malone's performance, Catching Fire wouldn't have been half as good.

Of course, none of Johanna's attitude and scene-stealing would've been possible without author Suzanne Collins and screenwriters Michael Arndt and Simon Beaufoy. The character Collins created and Arndt/Beaufoy expanded is the most interesting thing in the entire movie, which is saying something. When there's a water-clock arena, an Oscar-winner, and the pressure of millions upon millions of fans stacked against you, the odds are decidedly not in your favor.

But it's Malone's skill portraying a strong yet vulnerable woman that allows her to rise above the obstacles and the rest of the incredibly talented cast. We first saw this talent when she starred as a pissed-off tween in 1998's Stepmom and 15 years later, we see that same convincing rancor in Catching Fire, which is no easy feat. The last woman to show us such emotional range — from "slutty" to strong to independent to susceptible to brave to empathetic — was, wouldn't you know, Jennifer Lawrence in her Academy Award-winning role in 2012's Silver Linings Playbook. It may seem like a stretch now, but a nomination of some sort for Malone wouldn't be outrageous. Not in the least.

The reviews for Catching Fire have been overwhelming positive and many critics and fans credit the film's more than impressive special effects, the bigger bandwagon, the ever-increasing draw of J. Law, and the hotter romance for its success, but Malone should be on that list, as well. Whenever she comes on screen, you can't help but get a little excited. Lawrence might be the A-lister in the flick but Malone, like Johanna is to Katniss, is the life-support no one knew Lawrence needed.