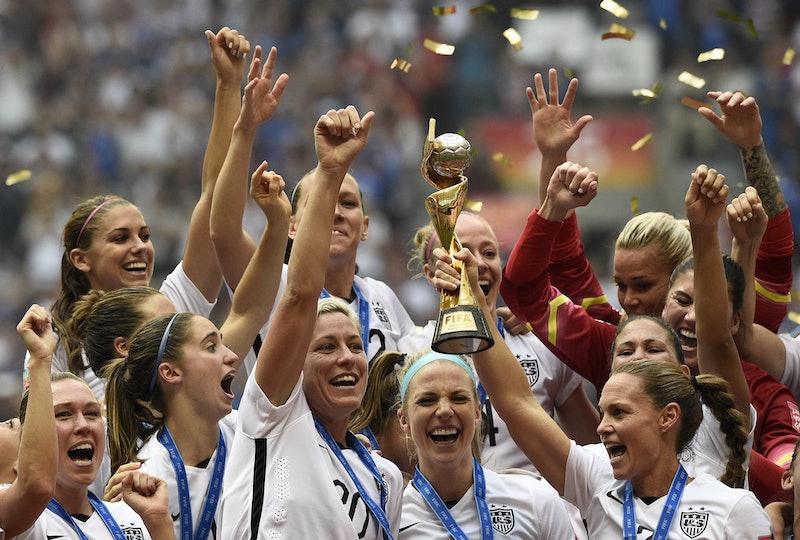 The U.S. women's soccer team's win against Japan Sunday was the team's third Women's World Cup victory, making the U.S. the first country ever to win three women's titles. In comparison, the U.S. men's team has never won the FIFA World Cup, and hasn't even placed in the top three since 1930. Yes, the men's World Cup has been around for much longer, but any way you slice it, three wins is better than zero. So, why is soccer still seen as a men's sport much of the time?

The United States' national women's soccer team is not only a triple World Cup champion now, it also has four Olympic gold medals under its belt and consistently ranks well in FIFA's worldwide rankings. Needless to say, they're pretty good. The U.S. men's team on the other hand is currently ranked 27th in the world and finished 15th in the 2014 World Cup in Brazil. Now, I'm not trying to criticize the U.S. men's team, but rather show that the U.S. women's team more than holds its own in comparison. Carli Lloyd's impressive hat trick (scoring three goals in a single game) in the first 16 minutes of Sunday's final game and Hope Solo's unrelenting goal keeping proved that women's soccer is just as entertaining and exciting as men's soccer. These women are incredible athletes and continuously prove their worth on the field, yet they're often seen as less impressive than male players. It's time to change that misconception.

More and more young girls are playing soccer in America — about 48 percent of U.S. Youth Soccer's participants are girls — and they need to know that the sport is just as much theirs as it is the boys'. Players like Lloyd and Solo inspired a lot of young athletes with their impressive performance Sunday, but these athletes shouldn't be seen as the only good female soccer players because they're just a few of the talented women in the sport.

Since the Women's World Cup began in 1991, female soccer players haven't gotten much attention. Unlike famous male players, they're only visible during the World Cup or Olympics, but these women deserve our attention. Soccer is not just a men's sport, and it hasn't been for years. American female athletes aren't only winning major titles — they're also making a name for U.S. soccer internationally. American soccer has always gotten a bad rap in other parts of the world, but the women's team's continued success is proving that the U.S. can play soccer, and play it well. So, let's stop thinking about soccer as a men's game and recognize the dedicated female athletes who kick ass.