When I studied abroad in Paris last fall, I worked on a 30-page mémoire de stage — kind of like a mini-thesis — based on the work I was doing as an intern at LaTéléLibre, a small, alternative media outlet that strives to build social consciousness about underreported issues. My mémoire was about the relationship between journalism and activism, and whether or not it was possible to do both simultaneously, especially given journalistic ethics about "objectivity" and "neutrality." But even after spending three months on the topic, I had no idea what the answer was.

For example, could I attend BDS protests as a pro-Palestine activist and still report about Israel-Palestine at the French National Assembly? Could I make an appearance at a #BlackLivesMatter protest and still report about racism? In the months since I've come back from Paris, I've realized that asking these questions makes about as much sense as wondering whether or not I can have opinions and still be human. But while I was still abroad, I came under fire from my colleagues, editors, mentor, and even friends for my "radical" points of view, because it was their shared belief that I would be unable to ethically report on "all sides" of a situation if I held a specific position.

I managed to cover the world's first international BDS festival, but only because I focused on art as activism instead of the deeply-rooted politics of the event. And I ended up going to a #BlackLivesMatter protest in December, just after events in Ferguson came to a head, as an activist and not a reporter — because apparently, sympathizing with the cause was not entirely ethical. But what "other side" is there in something like #BlackLivesMatter? 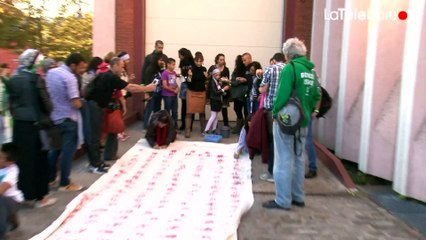 By simply existing, we are unable to be entirely objective. At every single moment of every single day, our surroundings and lived experiences are informing our thoughts and opinions. And for me, a woman of color, my personal is political — I cannot simply choose to detach myself from the fight for social justice, nor can I just turn off the "activist switch" when I am working as a journalist. I started thinking about this more and more in the past year, and what struck me was that people whom I knew were engaged in social justice encouraged me to continue being an activist and journalist at the same time, while journalists who focused on other things told me that I was risking all credibility.

Being an activist is a part of my identity, just as a career in engineering or law might be a part of yours. As long as I am transparent about my activism, there is no reason to not use writing — my biggest passion — to help amplify others' voices and bring attention to struggles that often fall off the public radar. If the purpose of journalism is to inform, then that is exactly what I am doing. By learning from those around me about the issues that matter most to them, I am then able to disseminate that information in a way that might make people want to pay attention. The combination of my journalism and activism is not about me, but rather about those from whom I learn, whose patience and hard work have contributed so much to my growth.

Activism does not undermine the legitimacy of journalism; it is instead yet another thing to write about and appreciate. My personal policy as a journalist is to be completely honest at all times. Choosing not to write about the things I'm passionate about or attempting to detach myself from my activism would not be honest. If I have a platform on which to share stories, I have an obligation to amplify marginalized voices and share as many different narratives as possible — and for me, that is what the intersection of journalism and activism entails.