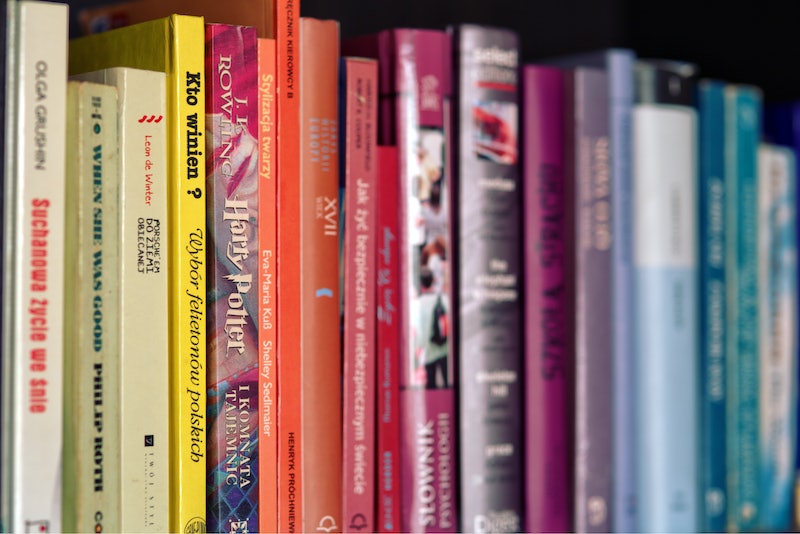 In theory, no one would waste time reading a book that didn't interest them. In practice, however, it's easy to start choosing books based on what you think you should be reading. I noticed recently that my TBR pile has become a hodgepodge of my friends’ latest recommendations and it-books the Internet won’t shut up about. Even books I select on my own come from some unwritten list of “Books You Need to Read to Be A Totally Cultured, Super-Literary Human Being” — all those Murakamis and Easton Ellises, Vonneguts and Palahniuks, Plaths and Atwoods, even Tao Lins and Miranda Julys. It took me until mid-May of 2015, after finishing Dance Dance Dance (are you impressed? Please be impressed), to realize this, and decide I needed a major change.

And so, when I hit The Strand to restock, I decided to try something new. Wanting to take some agency in my reading, and having very little money to spend, I walked around the used books racks outside, pulling books off the shelves almost at random. If a title, jacket description, even an author name appealed to me, I bought it. The only condition was that they couldn’t be books I knew even the slightest thing about beforehand. My goal: to find out if the books everyone recommends are any better than the millions of others out there that haven't made it to any top 100 lists.

1. The Sweetness at the Bottom of the Pie by Alan Bradley

From the cute, candy-colored cover, I thought this would be a lighthearted piece of chick lit — about a working girl trying to find love in the big city, perhaps? However, the blurb on the back told me that it was about an 11-year-old girl with a passion for poison. I was immediately sold. Flavia de Luce is an aspiring mad scientist in 1950s Britain. This alone would have held my attention, but adding the British detective genre I so love into the mix made this first book an instant favorite for me. As a Breaking Bad fan, the whole “anti-hero who loves science” shtick made me feel right at home with the book. And Flavia’s vicious wit made my roommate keep asking what I was laughing at. The world of the story is a flurry of whimsy and historical factoids, which delighted my nerdy free-spirit-ness. A good start to the reading binge!

What’s better than this? Just guys being dudes! From the title and the cover, which features a shirtless man pulling off his pants to show just a bit of the D, this one fulfilled expectations — and how! As someone whose sexual awakening included gay Harry Potter fanfiction as well as supernatural romance fluff like Twilight as key elements, I figured this book was guaranteed to, ahem, entertain me. Tommy and his “special buddy” Bert are angels who have reincarnated and found each other lifetime after lifetime since the Middle Ages. When they’re not saving the world from evil corporations, they spend pretty much all their time boning each other and the various beautiful men who come into their lives over their thousand-year relationship. Although I was pretty “meh” on the prose itself, I hadn’t bought the book looking for Literature. I got what I paid for, which was good old-fashioned gay erotica. Hell. Yes.

3. A Desert in Bohemia by Jill Paton Walsh

History nerds, like historians themselves, tend to specialize in certain periods, focusing their nerd-ship on, say, the Ottoman Empire or Song Dynasty China. One of my nerd specialties is the Cold War. Did you know that at one point, birth control pills became so expensive in the U.S.S.R. that abortion became the primary form of contraception for Soviet women? A Desert in Bohemia is a soap opera trying to be a lofty meditation on time and human nature and political philosophy. I get it; if you start your story with the 1945 Soviet takeover of Czechoslovakia and end it with the aftermath of the fall of the Berlin Wall, you probably feel like you have to make it more thematically meaty than just a bunch of characters falling in love, getting pregnant, getting divorced, losing their family fortunes, and getting tortured by the secret police (you know, typical slice-of-life stuff). I enjoyed the drama, but not so much how the author kept inserting clunky #deepmoments trying to make the characters’ stories universal to the whole Cold War.

4. Hypocrite in a Pouffy White Dress: Tales of Growing Up Groovy and Clueless by Susan Gilman

I decided to buy this memoir for the same reason I’ve gotten sucked into watching season after season of Girls: It may be a portrait of a selfish, silly person with a God complex, but it’s me as hell. Or, should I say, therefore it’s me as hell. The memoirs here are often cliché in their documentation of a girl’s coming of age in this crazy, fast-paced modern era, but that’s what made me relate to them. Maybe we’re all clichés deep down. (#deep) Although I spend much of my time trying to be unconventional so that my own future memoir won’t be a cliché, Susan’s “we’ve all been there” moments felt familiar in a humbling way. In depicting a certain subsection of feminist wannabe rockstars constantly scrambling for recognition, Gilman hit the nail on the head with such painful honesty that at times it felt like she was hitting my head.

As someone committed to social justice, I look for diversity of race, class, and gender perspectives in my media. This book search was no different, although the selection I was able to find isn’t incredibly stellar, especially where race is concerned. I had expected better, but New York City's East Village isn’t exactly the progressive and edgy place it used to be. However! This book has point-of-view characters who are female, POCs, and working class, and it handles intersectionality especially well. The only problem was the rich white male character, whose storyline just annoyed me — which is unfortunate, since his is the main thread that connects all the characters’ stories. He’s not in it too much, though. I loved the other characters and their relationships, which comprise the main focus of the book. Definitely getting the sequel.

If you looked at my name, you know that it is very androgynous. People often think I’m a man when they see it on paper. I’m sorry to say that I did the same thing to poor Lish McBride, who I assumed was a man from her name, and also from her often annoying straight white male protagonist. The female characters are pretty cool, though, and plentiful. And I don’t know if people still think a token Hispanic friend counts as representation in 2015, but that friend turns into a werebear, and that’s sick, so maybe a five or six out of 10 on that front? I’m hard to please when it comes to the teen supernatural genre, but I was satisfied with the world-building, had fun with the characters, and didn’t mind the obvious romantic subplot coming to fruition in between.

7. Enslave Me Sweetly by Gena Showalter

8. The Arcanum by Janet Gleeson

I mentioned I'm a history nerd, right? Like, 10 times? Well, I’m a traditional science nerd as well, and this true story of how the formula for making porcelain was discovered by European scientists in the 1700s got me right in both those nerd spheres. I loved the silly names (pretty much everyone in this book had like three first names, one of them almost always being Johann) and how the king of Saxony once traded an entire division of his army to the king of Prussia for a few expensive porcelain vases, because that’s how early modern European monarchs rolled, I guess. And I marveled at how so many of the main characters in the book worked themselves literally to death just so that their king could make some extra cash. Ah, the good old days?

This one was a short story collection about discos and raves in the '70s through the '90s, and since I weirdly love reading about people on drugs, it entertained me. A good half of the stories were interesting, but an equal half just felt like that guy at a party who keeps wanting to tell you about some pretty colors he saw on acid one time. Those just left me wanting to say, “Cool story, bro,” and walk away.

10. The Interestings by Meg Wolitzer

When you see yourself and your group of friends reflected almost perfectly in a book, it makes you love the characters for being similar to you, but for that same reason, it makes you want to burn the book so that no one can see your shame. The Interestings is about a bunch of self-obsessed people living in New York and trying to make it in the arts. They’re pretentious, neurotic, and awful to each other, but I love them because I am them. In addition to irritating me, it also really depressed me, because it foreshadowed the rest of my empty, self-absorbed existence. But don’t think it has a downer ending! Out of all the books on this list, this is the one I recommend most highly. It has the most developed prose and characterization out of the whole pile, and I’m glad it was the end note to the experiment.

My reading binge at an end, it seems like the literary road less traveled has about as many great stories (and as many mediocre ones) as the Important Literature that gets taught in English classes or written up in the New Yorker. I've found a couple of new favorites, although there were some boring ones, too, and a bunch in the middle — pretty much the same as the reading I had been doing before! But even though it didn't change the quality of what I read, I found striking out on my own as a reader to be refreshing. Diverging from the mainstream once in a while, as a Classic Writer once said, has made all the difference.

More like this
16 Novels That Paint A Realistic Portrait Of Abortion
By K.W. Colyard
5 Gripping Books To Read From Women’s Prize For Fiction Winner Ruth Ozeki
By El Hunt
Ottessa Moshfegh Is Happy To Be Your “It” Girl
By Arya Roshanian
10 Must-Read New Books Out This Week
By K.W. Colyard
Get Even More From Bustle — Sign Up For The Newsletter