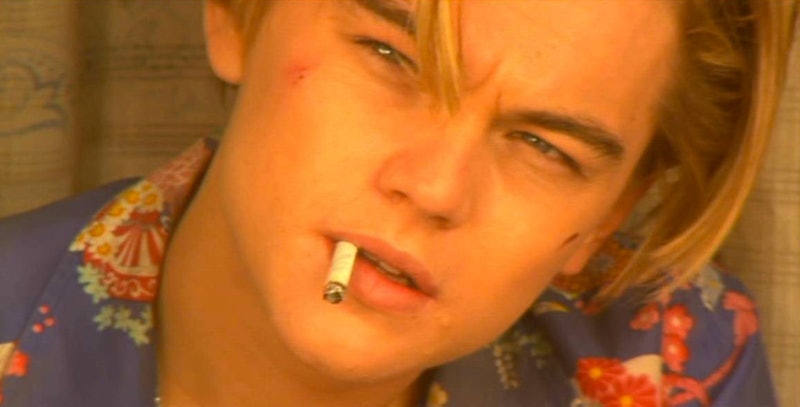 In 1998, Leo DiCaprio was the king of the world. Yes, I did make that Titanic reference, and yes, I regret it. But the truth still stands: Leo DiCaprio was hot shit in the late '90s. In fact, Dicaprio & Co. were tearing up the town, provoking disparaging comments from Senator John McCain and Claire Danes (who called him "immature"). This is never as apparent as it is in the New York Magazine profile that Vulture recently re-released — in fact, Nancy Jo Sales' piece is one of the most memorable pieces of entertainment journalism we've ever read.

The whole thing, honestly, sounds like it's straight out of the 1996 Baz Luhmann-directed Romeo + Juliet — raucous fights about nothing, young boys screaming profanity at each other and grabbing their crotches (think of it as a modern day "do you bite your thumb at me, sir"), Leo standing by with a cigarette in his mouth.

We're also now at least 35% sure Leo DiCaprio would have gone on to become a well-known serial killer had he not made it big in Hollywood.

Naturally, we couldn't help but round up some of our favorite quotes from it.

For one, this quote should go on DiCaprio's tombstone:

"Named after Da Vinci, and with a Mona Lisa smile."

And this one, which demands further explanation:

Backstory: McCain uttered that memorable phrase in an interview with The Washington Post, and is complaining that his 13-year-old daughter — like every other heterosexual 13-year-old at the time — had a crush on DiCaprio. His beef with him went beyond just the androgyny, though, and extended to the fact that DiCaprio spent much of Titanic smoking.

'They were always betting on who would blow up first,' says the actor friend. 'Tobey [Maguire] was into more of a Tom Hanks track. Leo was modeling his career after Nicholson and De Niro.' ('Portraying emotionally ill characters gives me the chance to really act,' DiCaprio said in the best-selling Leonardo DiCaprio Album, which also recounts an early Leo memory — killing a pigeon — as well as the time his father, George, a "bohemian" comic-book trader, urged his son to go off and lose his virginity. Leo, then 6, declined.)

We are, however, very glad he did not take his father's advice.

That was back in Leo's Growing Pains days, during which "he was becoming a bit of a misfit in his classes," the best-selling Leonardo DiCaprio, Romantic Hero reports gently. "Leonardo alarmed his teachers . . . when he drew a swastika on his head as part of his improvised imitation of mass murderer Charles Manson."

And a comparison to a French king:

'He started acting like an idiot,' says one highly placed New York publicist (who wouldn't allow me to use her name because, she says, "everyone fears his power" — as if Leo were Louis XIV, whom he recently played).

And the great response (by DiCaprio and Sales) to the gay rumors:

'If I want to go to a party with a few male friends, it doesn't mean I'm gay!' Leo has said. Totally, dude. After all, Sinatra hung out with Don Rickles, but that doesn't mean he was having sex with him, either.

We highly recommend you read the whole thing...well, because it's a trip. And because it involves Stan from Mad Men getting into a fight over a girl from Saved By the Bell. The gang was also called "The Pussy Posse," which we will be gagging about for approximately the next fifteen years.

More like this
Lindsay Lohan & Jonathan Bennett Celebrated Mean Girls Day Very Differently
By Jake Viswanath
What Is Miles Teller’s Net Worth? The 'SNL' Host's Bank Account Is No Joke
By Meg Walters
Lin-Manuel Miranda & Tituss Burgess React To 'Little Mermaid' Casting Backlash
By Radhika Menon
An Extremely Messy Ranking Of What Actually Happens In 'Don't Worry Darling'
By Chloe Foussianes
Get Even More From Bustle — Sign Up For The Newsletter