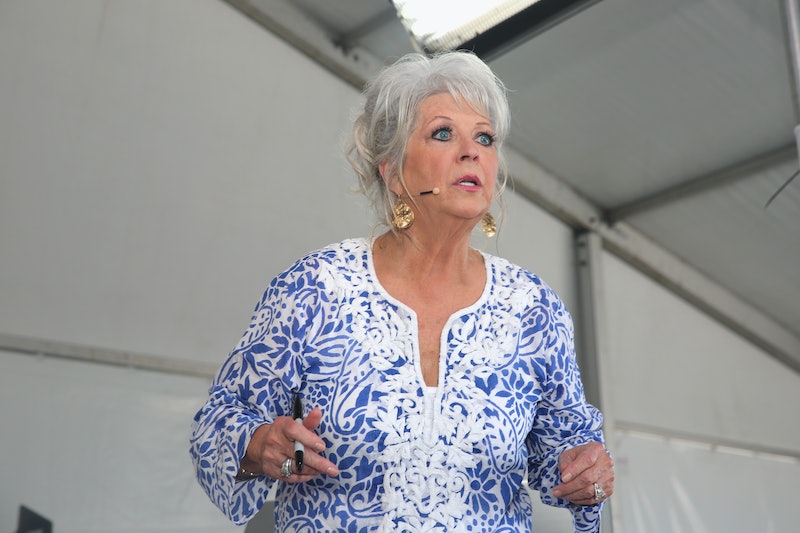 UPDATE: On Tuesday, a representative released a statement saying that it was Deen's social media manager who posted the picture to her Twitter account. "Paula Deen's Social Media Manager posted a picture this morning of Paula and Bobby Deen dressed in costume as Lucy and Ricky, from I Love Lucy. This photograph is from a Halloween episode of Paula's Best Dishes that aired in 2011. Paula immediately had this picture taken down as soon as she saw the post and apologizes to all who were offended. As such, Paula Deen Ventures has terminated their relationship with this Social Media Manager."

EARLIER: Whenever Paula Deen's name is trending on social media, I tend to assume it's for something negative. That was the case on Tuesday, when Deen posted a picture of her son in brownface on Twitter with the caption, "Lucyyyyyyy! You got a lot of esplainin' to do! #TransformationTuesday @BobbyDean." No, I'm not making this up. The picture featured the celebrity chef and her son dressed as Lucy and Ricky Ricardo from I Love Lucy. For some reason, this required her son to paint his face brown, in what appears to be an attempt to make him look like he is of Latino descent. Let's ignore for a moment how Deen's son actually has his face painted a darker shade than that of the skin tone of Desi Arnaz, who played Ricky Ricardo. Let's ignore pretty much anything besides the fact that there are three consenting adults in this picture who did not put a stop to it before it was taken and then shared on Twitter. Bustle reached out to Deen for comment, but the request was not returned at the time of publication.

Although Deen has since deleted the photograph, nothing disappears on the Internet, and people are rightfully annoyed by the insensitive move. It's one thing for Deen — who is no stranger to racial controversy — to want to dress up in a way that emulates a beloved sitcom, but why on earth would that require brownface? Brownface, for those who are unfamiliar with the term, has a documented and offensive history in the United States, similar to that of blackface. But let's just agree that, in general, any time a person of Caucasian descent decides to paint their face to resemble a minority, it is a really bad idea.

I could explain exactly why brownface, blackface, or anything of the like is so ridiculously offensive, but I don't think that's even the actual point of this latest snafu from Deen. The sheer cultural and racial blindness that she has displayed in posting this picture in the first place is glaringly obvious, and it appears that she continues to suffer from a distinct lack of education. There are numerous resources available on the Internet about exactly why brownface is unacceptable, and other celebrities have recently faced similar controversies for similar actions. In April of this year, Kylie Jenner received criticism for wearing blackface in a photo shoot, though she responded by stating they were "black and neon lights." This March, Julianne Hough apologized again for a 2013 Halloween costume for which she wore blackface, stating in Allure, "I don't even know how to talk about it because it's such a sensitive topic. It makes me so sad to think that I was that dumb." The examples are endless, and many feature high-profile celebrities that Deen would have, or should have, heard of.

In September 2014, Deen appeared on the TODAY show to apologize for the allegations of racial discrimination her longtime cook had brought against her, stating, "I’ve learned so much for the year, I really feel like it’s going to require another book ... Frankly, I disappointed myself, and for that I’m so sorry. I’m so sorry for the hurt that I caused people because it went deep. It went deep." But it's clear this image seems to suggest that Deen has not learned nearly as much as she said she did. However, she did state during the same interview that, "I have to say it took me a while because I was confused as to the length of time since that kind of … those words had been part of a language. I had a hard time understanding, because it had been 30 years."

At this point, I don't think Deen's words are an adequate excuse anymore. It has been two years since Deen's last racial controversy, and that's more than enough time to have educated oneself on this very basic, fundamental rule: Brownface (and blackface) is not OK.

Thus, it comes as no surprise that on the Internet, people's reactions range from disbelief to amusement, the latter emotion because, well, again? For all her attempts to disassociate her name from racism, Deen's legacy will continue to be marred by these kinds of controversies if she doesn't educate herself and make a genuine effort to display more sensitivity when it comes to the subjects of race.