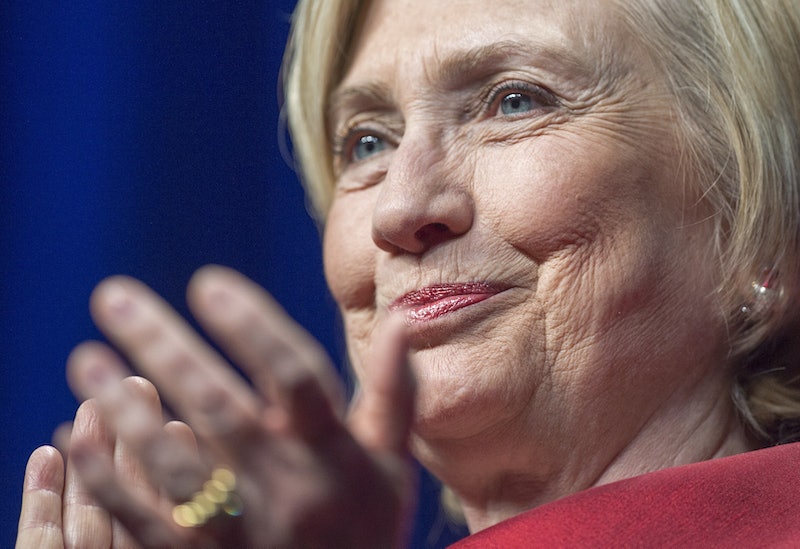 We finally got some answers from the airing of Hillary Clinton's long-awaited first national interview on CNN's "The Situation Room." Despite how excited Clinton made everyone feel about the prospect of a female president, one spot of darkness — sporting a silk tie and bad hairdo — loomed over the interview. Donald Trump was a negative topic that CNN's Brianna Keilar made sure the former secretary of state talked about. "I'm very disappointed in those comments, and I feel very bad and disappointed with him and with the Republican Party with not responding immediately and not saying, 'Enough, stop it,'" Clinton said.

Airing to the public Tuesday at 5 p.m. EDT, the interview was the first step toward a potentially more open campaign. Clinton has frustrated journalists by keeping them at bay. According to CNN, she has taken few questions and only accepted interviews from a few local publications in early voting states such as Iowa and New Hampshire. Now that she is faced with a national news outlet, she had to express her feelings about reality TV host and fellow presidential candidate Trump. She continued on about Republicans: "They’re all in the same general area on immigration. They don’t want to provide a path to citizenship."

The two high-profile candidates have not had an easygoing relationship. After Trump made racially-charged remarks in his announcement address, claiming that Mexicans immigrants were rapists and drug mules, Clinton used him as an example of someone making inflammatory statements, though she did not mention him by name. Her words were in the context of what inspires violence like the kind in Charleston, South Carolina. Trump responded by releasing a video in which he called his competitor "pathetic" for supposedly trying to blame him for the shooting.

It's very unlikely that it'll be a Clinton vs. Trump election. A New Hampshire poll published June 25 shows Clinton in a statistical tie with Senator Bernie Sanders. A poll of likely early voters from Iowa, conducted by The Des Moines Register before Trump had even officially entered the race, revealed that four percent of those surveyed named Trump as their first choice. Only two percent named him as their second choice, but 58 percent said they would never support him.

Although the Manhattan real estate mogul might not be leading the Republican poll, he has likely gained enough traction to earn a spot in the Fox debates. New debate rules have limited the event to 10 candidates. The crowded Republican race now has 14 candidates, according to The New York Times, with Scott Walker and John Kasich likely to join. It seems that Clinton will have to strategize around Trump for the foreseeable future.