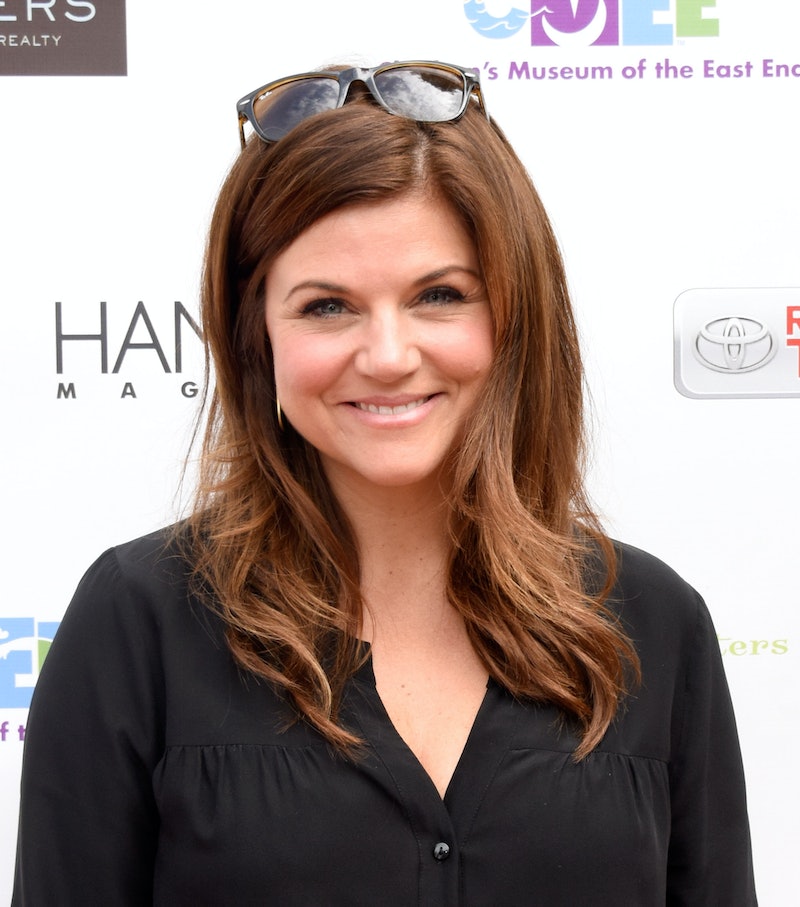 ICYMI while you were busy sipping some Fourth of July margs, Tiffani Amber Thiessen officially became a mom, times two. Late last week, the White Collar star gave birth to a son, Holt Fisher, who now gets to play little brother to Theissen's cute-as-a-button four-year-old, Harper Renn. And lucky for you, you don't have to wait weeks to catch a glimpse of the little guy, either. Thiessen shared some adorable Instagram pics of baby Holt meeting his big sis Harper for the first time over the weekend, and man, will they make your heart melt.

Thiessen first broke the news that she was expecting again back in January, when she shared a sweet family photo on Instagram, alongside little Harper and her husband, actor Brady Smith. "We are excited to announce the news that we are expecting," Thiessen wrote in the caption. "Harper could not be more thrilled to have a sibling and a playmate."

And that's no big surprise. As the actress once told Sweden With Love magazine, "Every day, she begs me to have a baby. She can’t wait to turn into a little mommy. She’s ready!"

Yep, by the looks of the photos Theissen shared of Harper meeting Holt, that definitely sounds about right.

I know; adorable, right? But just wait, there's more — and it only gets better...

And then there was this sweet shot of the pair from above:

My fave, though, has to be this shot from Monday night, in which Tiff pretty much hits the nail on the head about what dinnertime looks like during Week 1 with a new baby. Nom nom nom ...

Now that White Collar's ended, the new mom of two is about to get lots of much-needed time off to spend with baby Holt. Not that she'll likely sit still for long, though. Theissen already keeps herself pretty busy with her nursery bedding and furniture line, Petit Nest, and her new gig on the Cooking Channel — a regular series called Dinner At Tiffani's. Hopefully though, in between gigs she'll share more adorable moments of Harper and Holt together on Instagram, because I'm pretty sure I just found my new favorite celeb sibling duo.