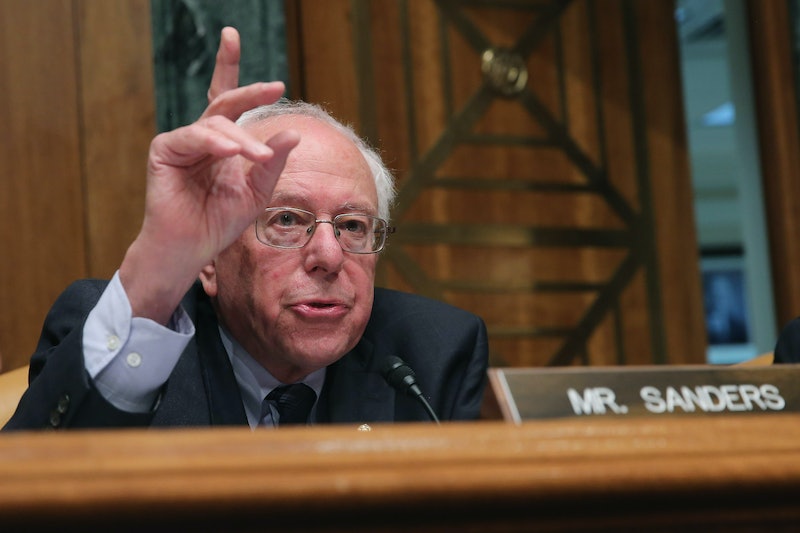 Slowly but surely, Bernie Sanders is making us all look foolish. I'll cop to it myself — I figured his candidacy was one of those dead-on-arrival longshot bids that would end with him polling single digits, but it's looking like the self-avowed socialist senator from Vermont has other ideas. Sanders' numbers are surging, putting him squarely in the second-place slot behind frontrunner Hillary Clinton, and all things considered, that's pretty remarkable. So in that spirit, here are nine Bernie Sanders campaign slogans we'd like to see, because everybody needs a catchy motto.

Look, there's no denying it — Sanders isn't the most dynamic, scintillating politician you'll ever hear speak. He blends a plainspoken, impassioned attitude with a brand of populist politics that's very appealing to people on the Democratic left. But a soaring orator like 2008-era underdog Barack Obama? That's not the style he's bringing to the stump, nor should it be. You have to be yourself.

As such, the slogans don't spring to mind quite as freely. What, if anything, could be Sanders' version of "Yes We Can?" Or should he go for some lighter, less dramatic fare? Here are nine possibilities that would be kinda cool to see.

1. "You'll Never Get Burned By Bernie"

Cons: Unnecessarily introduces the concept of being burned by Bernie even as it denies it, which I'm sure some messaging gurus would argue against.

Pros: Gives the 73-year-old Sanders a nickname that could, in some conceivable universe at least, be considered hip. Also, he's a Brooklyn native, and Brooklyn starts with B, and there are also subways there. Synchronicity!

Cons: The last, most visible candidate who's name got paired with train imagery — Herman Cain's 2012 campaign, dubbed the "Cain Train" by some — failed miserably.

Pros: Fits in nicely with his pro-working class rhetoric, invokes the Declaration of Independence, is very politically safe.

Cons: A little overplayed, and frankly, kind of boring.

Pros: If there's any candidate running who could pull this off, it'd probably be Sanders. Even though he's well-aged and a somewhat shambling figure, he has that empathetic charm that most all politicians crave. Could make for some so-bad-it's-good merchandising opportunities.

Cons: Becomes problematic if he's ever embroiled in a sex scandal of any kind.

Cons: Is objectively untrue, which causes its message to fold in on itself.

6. "Make Every Weekend A Weekend At Bernie's"

Pros: Reminds everyone of the 1989 film Weekend At Bernie's, a comedy classic that's still bandied about as a nostalgic pop-cultural reference to this day.

Cons: The "Bernie" in the movie is a corpse that two men cavort around with, acting as though he's still alive. This is problematic, for obvious reasons. Plus, the sequel was underwhelming, which sends a bad message for Sanders' 2020 reelection bid.

8. "Nobody Puts Bernie In The Corner"

Pros: Has that playful vibe that might not fly for a mainline campaign slogan, but could look good on some merch. Also, it accentuates Sanders' rambunctious, fearless confidence in his brand of grassroots liberalism.

Cons: In the original phrasing, it's "nobody puts baby in the corner." Swapping in your name for the word "baby" isn't a great look.

Pros: Has a classic, old-school vibe — it's the same slogan used by 1972 Democratic presidential nominee George McGovern, a throwback that the unabashedly liberal underdog candidate Sanders might draw some inspiration from.

Cons: McGovern suffered the worst defeat in American history, losing all but Massachusetts and Washington, D.C. to the Nixon/Agnew ticket.