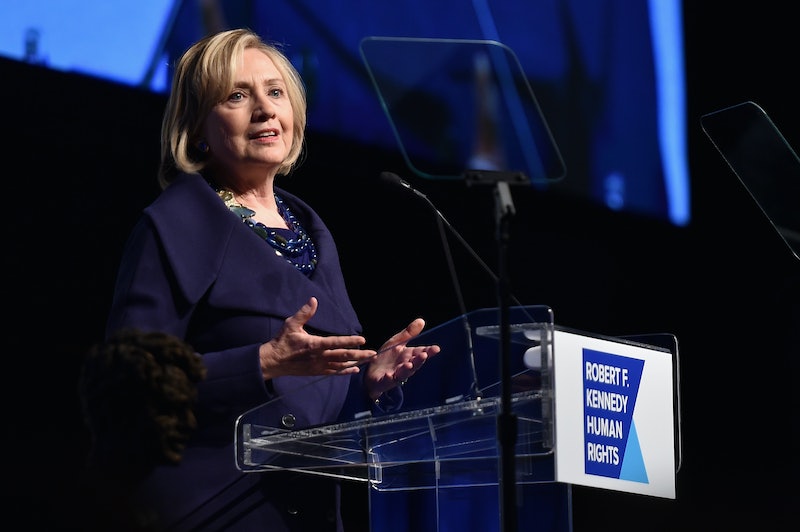 On Tuesday, Hillary Clinton's interview with CNN senior political correspondent Brianna Keilar aired. Clinton's interview, taking place in liberal Iowa City, is the first in her official presidential campaign since she launched it in April. So when was Clinton's last major televised interview, and what did she say? It provided a small look at what viewers could hopefully expect from Clinton's future interviews — some personal quotes, some talk about her policies, and, of course, learning a bit more about her campaign.

Clinton, in contrast to her major democratic opponent Bernie Sanders and the other candidates, has not been buddy-buddy with the press. Many have complained she's been dodging the press, and hasn't been doing enough public interviews. ABC news reported that as of May 12, Clinton had answered just nine questions from the press since her campaign launch. But on Tuesday, that will change. In her last major televised interview, which aired in June 2014, Clinton talked to Diane Sawyer in an ABC News "One on One" interview, which was prompted by the release of her book Hard Choices. She talks about everything, from her age, to her role as Secretary of State, to being a woman in politics, to her loss to Obama in 2008.

"I think because I really didn't have a good strategy for my campaign. I didn't plan it the right way ... I don't think I ever said, 'Yes, you may have known me for eight years, but I don't take anything for granted. I have to earn your support.'" She goes on to say that her campaign really picked up when she lost in Iowa, and then she worked even harder in New Hampshire. But at that point, she admitted, "I think it was too late."

When asked about her health, she says, "It's very good, thank you." When Sawyer pressed her about her concussion — which Republican Karl Rove raised questions over — Clinton admits that she had some dizziness but that she "felt fine, and I felt it was kind of silly that I was supposed to stay in bed." The doctor did, however, find a clot behind her ear, which she simply treats with blood thinners now. When asked to respond to Rove, Clinton says, "I know he was called 'Bush's brain' in one of the books written about him, and I wish him well."

On Announcing Her 2016 Presidency

Now Clinton is obviously running, but a year ago, she wasn't sure. When asked when she will decide, Clinton asserts herself by saying, "You know, I'm going to decide when it feels right for me to decide ... I will be on the way to making a decision by the end of the year, yes ... I have to make the decision that's right for me and the country."

"We came out of the White House not only dead broke but in debt. we struggled to piece together the resources for mortgages, for houses, for Chelsea's education. You know it was not easy." She defends her paid speeches, saying, "Let me put it this way ... I thought making speeches for money was a much better thing than getting connected with any one group or company, as so many people who leave public life do."

Being A Woman In The Spotlight

"When you're in the spotlight as a women, you know you're being judged constantly. I mean, it is just never-ending, and you get a little ... worried about, okay, well people over in this side are loving what I'm wearing, looking like, saying ... people over on this side aren't ... your natural tendency is how can you bring people together to better communicate ... I'm done with that ... I am over it. Over it. I think I have changed. Not worry so much about what other people are thinking."

In May 2014, according to The Washington Post, President Obama traded five Guantanamo Bay prisoners for U.S. Army Sergeant Bowe Bergdahl, who had been held hostage for five years by the Taliban. When asked about the decision, Clinton said, "I think this was a very hard choice, which is why I think my book is so aptly named. If you look at what the factors were going into the decision, of course, there are competing interests and values. I mean, one of our values is, we bring everybody home off the battlefield the best we can. It doesn't matter how they ended up in a prisoner of war situation ... It does not matter. We bring our people home."