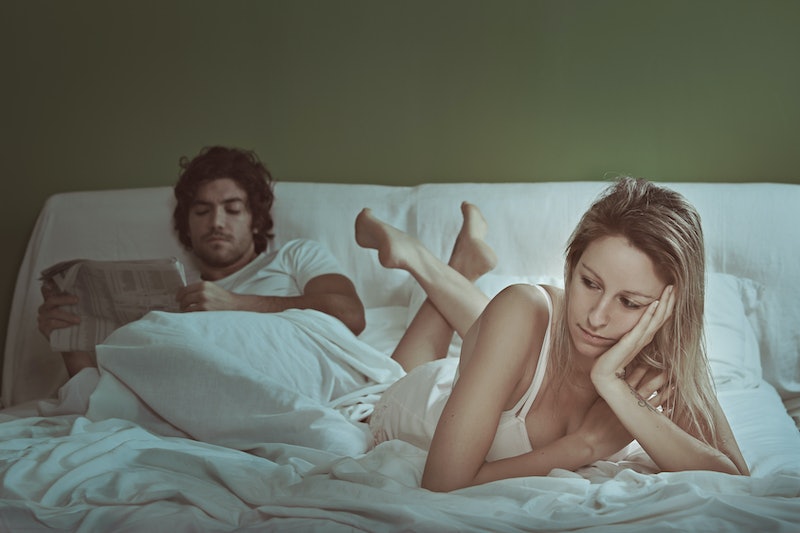 Like every good lesbian, I love shows involving other lesbians, no matter how ridiculous they are. That being said, I recently found myself marathoning the entire run of The L Word and wondering two things: 1. Does anyone in L.A. go to work? and 2. Am I having enough sex? If you've never seen that show, just mentally replace it with your favorite trashy drama-thon. It doesn't really matter what it is. Entertainment has kind of a one-track mind. It's stars rarely have killer menstrual cramps or an intense urge to watch an entire series of a show on Netflix before leaving the couch. It just looks like people have time to put on full makeup and flawless outfits, only to have them ruined in the sack.

In the real world, sexual frequency varies dramatically from couple to couple. According to a leading New York urologist, average sexual frequency for couples in their 20s is about every one to three days, tapering off to about twice per week in your 30s. But that's just an average, not a hard-set rule. Here are some tips for determining whether you are having enough sex. Because sometimes it is really, really hard to know what's normal and what's not. Spoiler: The answer is way easier than you think it is.

If you're happy and satisfied, even if you're only doing the deed sporadically (like, every election day), then BOOM. Question answered. Yes. You're having enough sex. Some doctors say it's not normal to have no sex drive at all, while a rising population of asexual people would beg to differ. There's no hard science that says you need to have sex a certain number of times (or at all) for your physical or emotional health. There are studies that indicate people who have sex two or three times per month are happier than people who have less sex, but that doesn't mean you can't be happy if you like way more or way less sex. You get to make the rules.

2. Does your partner feel like you're having enough sex?

Varying sex drives is right up there with money on the list of things couples argue about the most. It's also a place in your relationship where a little give and take and a lot of communication are important.

If you have a low sex drive and your partner has a high sex drive, you might benefit from cultivating what The Society of Obstetricians and Gynecologists of Canada calls "a sexually neutral state." This means that you're not particularly craving sex, but you're not opposed to it, either. When your partner wants it bad, you can train your body to go from a sexually neutral state to an aroused state with some foreplay, patience, and communication.

But if you're not into having more sex, let your partner know. You never have to have sex when you don't want to. On the flip side, you can't make your partner have sex when he or she isn't in the mood. You may need to explore other options for meeting each other's sexual needs. And if you're both fine with having varying sex drives, even better.

3. Do you worry that you have a low sex drive?

If you want to have more sex, but your body is just not cooperating, you could have an underlying medical problem. Common health concerns, such as high blood pressure, depression, and hormone imbalances, all wreak havoc on your libido. The pill and other medications can have similar effects. See your doctor and talk frankly about your sexual desire (or lack thereof). If the problem turns out to not be related to a physical ailment, you could have a mental or emotional issue stemming from trauma, breakups, or conditions like depression and anxiety. Be your own health advocate, and keep going until you get your sex drive up to where you want it.

That's it. Three things. That's kind of all there is to know about your sex drive. No study or advice column can tell you if your sex life would make a better documentary on the History Channel than HBO or pay-per-view. Only you, your partner, and your healthcare providers get a say.

More like this
12 Aphrodisiac Desserts To Spice Up Your Valentine’s Day
By Kaitlyn Wylde
Just Because You're Cheap Doesn't Mean Your Home Can't Look Expensive — These Clever Things Are Proof
By Maria Sabella and Rachel Bar-Gadda
16 Valentine’s Day Quotes About Chocolate That Will Make You Hungry
By Emma Cueto
21 Galentine’s Day Memes To Celebrate Your Best Friends
By Meghan Bassett and Mia Mercado
Get Even More From Bustle — Sign Up For The Newsletter
From hair trends to relationship advice, our daily newsletter has everything you need to sound like a person who’s on TikTok, even if you aren’t.