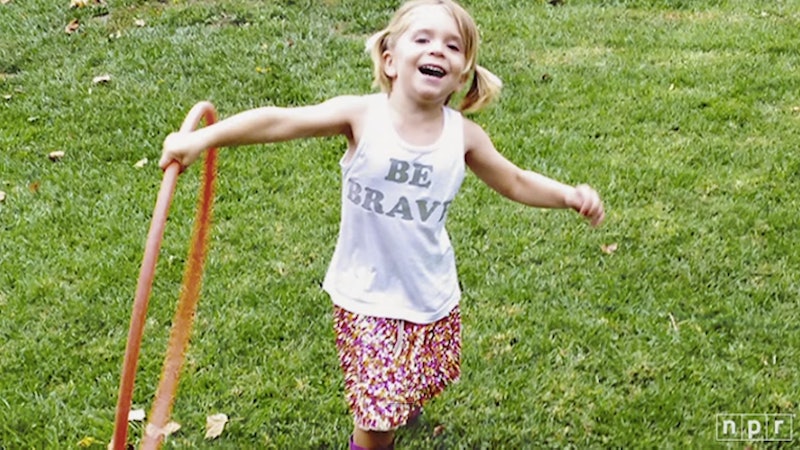 On the Fourth of July, while most people were busy grilling up burgers and setting off fireworks, NPR aired a 7:30-long clip that explored the moving story one Oakland, Calif. family's unique journey: coming to terms with their 4-year-old son's gender transition from "Jack" to "Jackie." Thirty seconds in, I was enthralled. And Twitter soon let me know I wasn't alone. The story of Jackie Christian-Carter could have easily gotten lost in the busy Fourth of July news cycle, but instead, its beautifully powerful message perked up a lot of ears and touched a lot of hearts — and for good reason.

To hear Jackie's mom Mary Carter tell the story, the moment "Jack" became "Jackie" happened in the back of the car one day over a year ago; and it all started with a simple question. In the NPR interview, Mary shares the story of what she now calls "The Day":

It was May 15, 2014, and I remember the date because Jackie was out of school that day. We drove to drop her older sister off at kindergarten. And normally Jackie is quite happy and content to hang out with me and play. Jackie just looked really, really sad; sadder than a 3 1/2-year-old should look. This weight that looked like it weighed more than she did, something she had to say and I didn't know what that was. So I asked. I said, 'Jackie, are you sad that you're not going to school today?' And Jackie was really quiet and put her head down and said 'No, I'm sad because I'm a boy.'

Those seven little words pretty much told Mary all she needed to know. Soon after, Mary drove to a local drugstore, where Jackie picked out elastic hairbands so she could tie her hair up in makeshift ponytails. "I've never seen such a happy child," Mary remembers. "To go from maybe an hour before this, this child who looks so sad, to that, I felt like I'd done something right by her."

Of course, looking back now, there had been some signs that Jackie wasn't comfortable being Jack. For one, she often donned her older sister Chloe's dresses and bright, pink boots around the house. But she'd never before said it so clearly: she didn't feel right in her own skin. That day in the car, Mary pressed Jackie with one more question: "I thought a little bit longer and I said, 'Well, are you happy being you?'" remembers Mary. "And that made Jackie smile. And I felt like for that moment, that was all that really mattered."

If your heart's in a puddle right now, I am totally there with you. And as the story has steadily gained traction over the last four days, countless others have weighed in on it themselves:

It's hard to hear Jackie's story and not hold Caitlyn Jenner's in the back of your mind. Over the past few months, Caitlyn's single-handedly brought a ton of positive attention to gender identity and gender transitioning in a way no one really has before; and it's impossible to ignore just how much that's made the country — and the world — move forward. It's also helped the public more willing to hear and accept stories like Jackie's. But there is one big difference between Caitlyn's transition and Jackie's that's hard to ignore: Caitlyn made the decision as an adult in her sixties, whereas Jackie hasn't even graduated preschool yet. To this, many raised concerns that transitioning a child so early, before they've fully matured, might be jumping the gun:

But for the record, neither of the Christian-Carters mentioned anything about gender reassignment surgery during the interview, suggesting that they'll cross that bridge when they come to it. For now, though, it's pretty clear that Jackie is just happy being Jackie. Even if that just means longer hair, fun dresses, and feeling more comfortable walking into preschool for the time being.

As for other comments about the story... many were just straight-up ignorant:

But for all the ire that this piece drummed up, there were a few sobering voices in the crowd that at least tried to shut down the hate. Take this one woman, who gave Twitter a gentle, yet powerful reminder:

You can listen to the Christian-Carter family's full story over on NPR, and watch a short clip below to learn more about Jackie and her family.