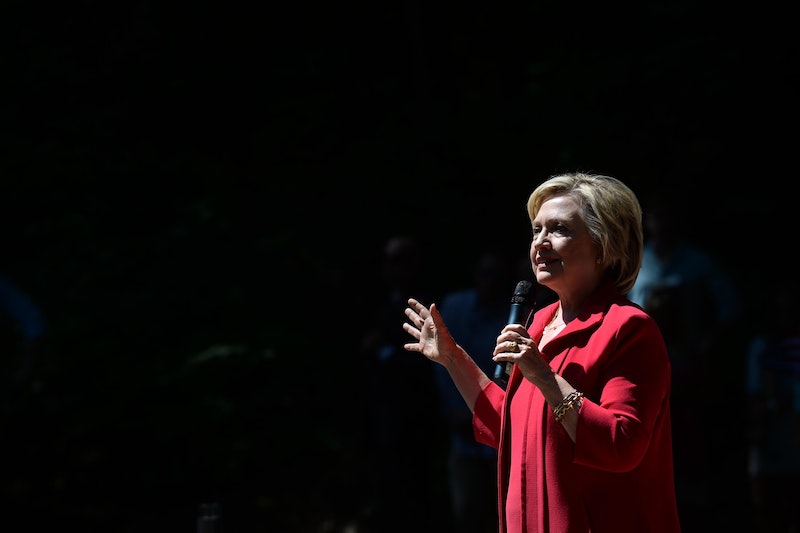 On Tuesday, Hillary Clinton gave her first major interview since her presidential campaign launched in April. While on the campaign trail, she talked to Brianna Keilar on CNN's The Situation Room about everything from her opponent Bernie Sanders to her economic policies to her email practices. When asked about Donald Trump's recent statement about immigrants, she said she was "disappointed in those comments," and then talked about immigration, saying she wants the undocumented community to have a path to citizenship.

If you've been absent, Trump's comments in question are racist remarks about Mexican immigrants in his campaign announcement in June. He said:

Yes, he called all Mexican immigrants rapists and criminals. Since then, NBC has cut ties with Trump.

Clinton is not just "disappointed" with Trump. Her critique goes beyond him, and she said,"I feel very bad and disappointed with him, and the Republican party for not responding immediately and saying, 'Enough, stop it.'"

She said that, really, the entire Republican party is "all in the same general area on immigration." She explained, "They're on a spectrum of hostility, which I think is really regrettable."

I'm going to talk about comprehensive immigration reform. All of the good, law-abiding members of the immigrant community that I've made across the path of my life, that I would like to see get the path to citizenship.

Clinton, unlike Trump, who is advocating for a wall between the U.S. and Mexico, wants to encourage legal immigration. Why does she want a "path to citizenship?" She says immigration is a good thing:

Watch out, Trump. If Clinton is President, we might just have a reformed "path to citizenship."Image: Getty Images (1)