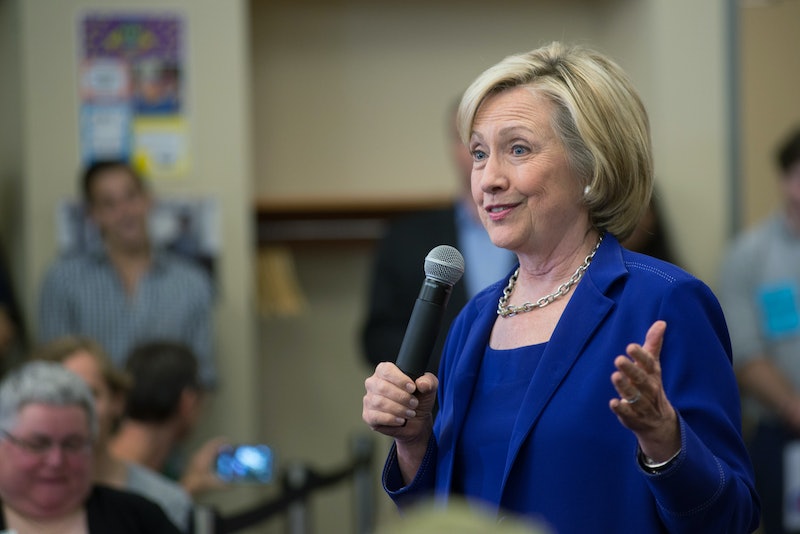 During an otherwise rocky interview with CNN's Brianna Keilar on Tuesday, 2016 Democratic frontrunner Hillary Clinton managed to eke out at least a couple solid answers on controversial issues. After calling out the GOP field for not stamping out candidate and billionaire business mogul Donald Trump's questionable comments on immigration quickly enough, Clinton told Keilar that, while she supported policies that offered a renewed path to citizenship for those in the country illegally, a recent incident in San Francisco (a well-known sanctuary city) proved that there was still work to be done. The city, she declared, had "made a mistake" by not sending away alleged killer Juan Francisco Lopez-Sanchez — an immigrant in the country illegally who had previously been deported on five separate occasions.

"When you last ran for president, you supported sanctuary cities," Keilar posed on Tuesday. "In light of this terrible incident, does that change anything about your view on this?" Clinton responded by saying that San Francisco authorities would have been better off following the guidance of Homeland Security, which had advised them to send Lopez-Sanchez back to his home country following his release from prison in April. (Sanchez was subsequently arrested and charged in the killing of 32-year old Kathryn Steinle just this past week.) She explained:

Across the aisle, brash GOP candidate Trump has pointed to Lopez-Sanchez (who had previously circled the U.S. immigration courts under the name Juan Jose Dominguez de la Parra, according to The Los Angeles Times ) as proof of the larger issue concerning undocumented immigrants, specifically those from Mexico.

"This senseless and totally preventable act of violence committed by an illegal immigrant is yet another example of why we must secure our border immediately," said Trump, who had previously promised to build a massive wall along the southern border if elected president, in a statement on Friday. "This is an absolutely disgraceful situation and I am the only one that can fix it — nobody else has the guts to even talk about it."

Sanchez was arrested and charged on Monday for his alleged involvement in the fatal shooting of Steinle, who had been walking along Pier 14 of the Embarcadero with her father, 68-year-old Jim Steinle, last Wednesday when she was shot in the chest.

"She just kept saying, ‘Dad, help me, help me,'" said Steinle's mother, Liz Sullivan, in an interview with The San Francisco Chronicle on Sunday. "It's surreal. I don’t think I’ve totally grasped it."

According to The Los Angeles Times, Sanchez's sordid history of criminal activity had prompted U.S. Immigration and Customs Enforcement (ICE) to put him on an "immigration detainer," meaning that local authorities would be required to pass his file through Immigration before releasing him into society again. That agreement, said an ICE spokeswoman in a statement, "was not honored."

On Tuesday, Clinton reiterated her belief that those same authorities charged with running Sanchez's file through Immigration officials had made a grievous error.