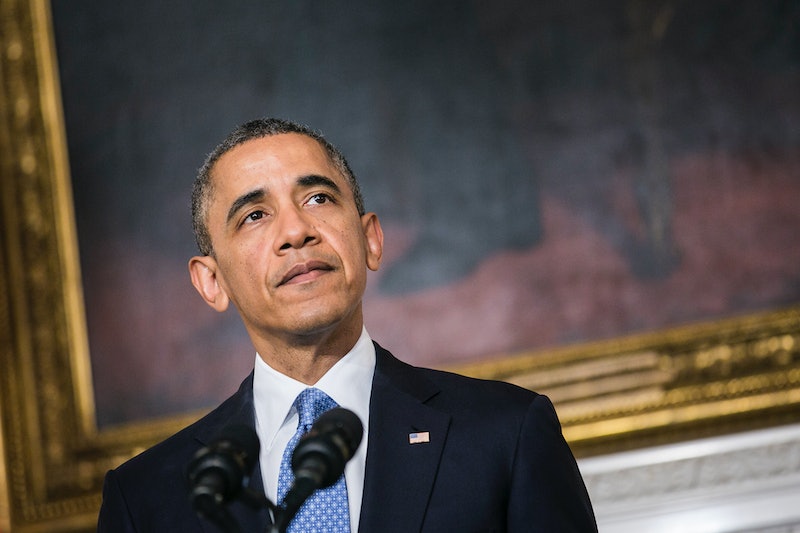 Something pretty historic happened yesterday. For the first time in three decades, the United States and Iran managed to see eye-to-eye and make a deal, albeit a temporary one, over Iran's nuclear program. But pretty much right after the accord was announced, Israel, Saudi Arabia and members the GOP all came out against it, some critics even going so far as to call this President Barack Obama's "Munich moment" — making it clear that, well: haters gonna hate.

Only hours after the deal — which eases international sanctions for six months while Iran stops enriching uranium beyond the levels necessary to use in power stations — was announced, Obama called Israeli Prime Minister Benjamin Netanyahu (who had earlier called the accord "an historic mistake"). Though the White House's press briefing on the phone call was positive — saying "the two leaders reaffirmed their shared goal of preventing Iran from obtaining a nuclear weapon," and that "the President underscored that the United States will remain firm in [its] commitment to Israel, which has good reason to be skeptical about Iran’s intentions" — the Israelis had a different take on the conversation.

"The prime minister made it clear to the most powerful man on earth that if he intends to stay the most powerful man on earth, it's important to make a change in American policy because the practical result of his current policy is liable to lead him to the same failure that the Americans absorbed in North Korea and Pakistan," said Likud Beytenu MK Tzachi Hanegbi. "Iran could be next in line."

Israel has made it clear that, not only is it furious about the agreement itself, it's also pretty upset that it wasn't privy to the secret negotiations being held by the U.S. and Iran. And it's not alone in that — Saudi Arabia is pretty unhappy about being left out as well.

Nawaf Obaid, a senior advisor to the Saudi royals, has accused the U.S. of deception over the Iran negotiations, warning that Saudi Arabia would be following its own independent foreign policy. "We were lied to, things were hidden from us," he said. "The problem is not with the deal struck in Geneva but how it was done."

Obama also faces fierce skepticism from Republican members of Congress, with some calling the President "weak" and pointing out that it'll be easy enough for Iran to just restart its program once the sanctions are taken away. Many are even pushing for new sanctions — even though that, uh, essentially shatters the agreement.

Rep. Ed Royce, R-Calif., chairman of the House Foreign Affairs Committee, has said that the deal just doesn't ensure the protection of the United States. "Instead of rolling back Iran’s program, Tehran would be able to keep the key elements of its nuclear weapons-making capability. Yet we are the ones doing the dismantling – relieving Iran of the sanctions pressure built up over years," Royce said. House Majority Leader Eric Cantor, R- Va., echoed similar concerns, saying the agreement was a mistake because it “explicitly and dangerously recognizes that Iran will be allowed to enrich uranium.”

Republican Sen. Marco Rubio, for his part, said the accord showed “other rogue states that wish to go nuclear that you can obfuscate, cheat, and lie for a decade, and eventually the United States will tire and drop key demands.” And Texas Republican Sen. John Cornyn, sent, er, this tweet right after the deal was announced:

Because, of course. It all comes back to Obamacare. Even nuclear weapons.

And what did the President himself have to say about the negotiations?

"Since I took office, I’ve made clear my determination to prevent Iran from obtaining a nuclear weapon. As I’ve said many times, my strong preference is to resolve this issue peacefully, and we’ve extended the hand of diplomacy ... Today, that diplomacy opened up a new path toward a world that is more secure -- a future in which we can verify that Iran’s nuclear program is peaceful and that it cannot build a nuclear weapon," Obama said in a statement.

As much as Congress and various allies continue to call doom and destruction on the deal, the fact remains that Obama has succeeded in using peaceful and diplomatic negotiations to create a (yes, temporary — but what isn't?) solution to the Iranian nuclear issue. And not much more can be asked of a political leader. As long as the GOP's threats don't scare the Iranians off their end of the accord, what we're seeing is really how politics should work.