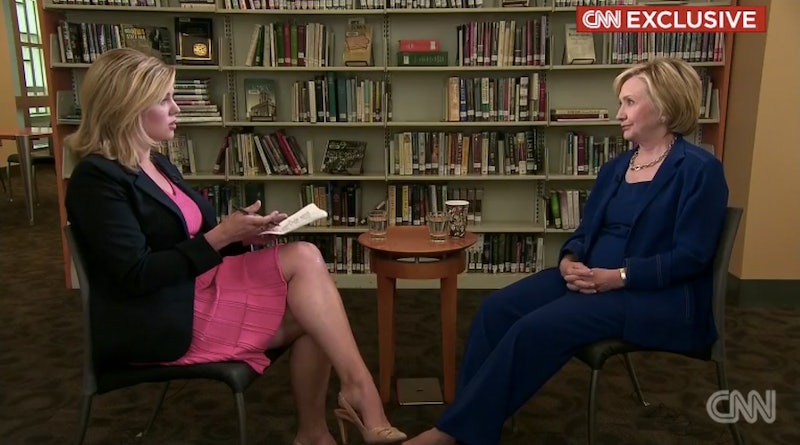 Days before the event even took place, the political sphere was buzzing about whether CNN's interview with Hillary Clinton was biased. The controversy surrounded Brianna Keilar, the CNN anchor who conducted Clinton's first major interview, and Keilar's relationship with the candidate's campaign. Two weeks ago, Keilar attended the wedding of Clinton's Director of Grassroots Engagement Adam Parkhomenko, and Kirby Hoag, the Ready For Hillary deputy operations director. Though it is unsure (but unlikely) if Clinton was in attendance, many wondered if Keilar would disclose her connection before the interview; she did not.

Keilar, who covers the 2016 Democratic candidates (including Clinton), attended the wedding with two other CNN correspondents, and was featured in a tweet that has been widely distributed. It's likely that many drew comparisons to the recent controversy surrounding ABC anchor George Stephanopoulos, who failed to disclose his $75,000 donations to the Clinton Foundation before covering Clinton's campaign. Though Stephanopoulos apologized, the damage was already done.

It's a bad year for journalistic integrity, with Stephanopoulos' oversight and the bewildering web of lies that Brian Williams wove himself into. Now, more than ever, it's important that journalists go above and beyond to avoid accusations of bias or objectivity. However, in a close knit circle like D.C. politics, it's impossible to avoid friendly relations with some candidate or another, which is why disclosures are necessary.

However, the likely fact of the situation is that disclosing her relationship with Parkhomenko and Hoag wouldn't have helped cease the accusations. Before the interview even aired, Keilar was accused by Fox News' Outnumbered hosts of "soft balling" the interview. "How much easier could she have it?" asked one host, while another predicted that the interview would be full of questions about "yoga poses" and what it's like to be a woman. "We know she won't ask tough questions," one said.

But it is very clear that Keilar did. In fact, a large part of the interview was composed of tough questions, and even though Clinton tried her best to avoid giving answers to whether she was trustworthy, or what her economic plans may be, Keilar continued to press. On the trustworthiness question in particular, Keilar was relentless, attempting to get the former Secretary to say whether she felt any personal responsibility for why polls show that many Americans don't trust Clinton. "Would you vote for someone you don't trust?" Keilar asked.

Keilar should have disclosed her connection to Clinton's campaign — it's good journalism. But in this case, her actions spoke louder than her words. After the tension of the beginning of the interview, Keilar left it on more amenable terms — asking about the upcoming woman on the $10 bill, and wondering about Clinton's favorite SNL impersonator — but Keilar's reporting was substantial and thorough. Even Fox News might be impressed about her refusal to let the Secretary dance around Email-gate.

But going forward, journalists should not make the same mistake, because the news cycle has shown us that, good intentions or no, journalists can be swayed and biased. Not every interview will hold Clinton and other candidates to the issues. Going forward, it will be interesting to see how Fox News, for example, handles coverage and interviews with Republican hopeful Mike Huckabee, who hosted a show on Fox News. The cycle will be full of similar, unavoidable conflicts of interest. And though the American populace doesn't tend to be forgiving in matters of politics, on one thing almost all voters agree: Transparency is key.