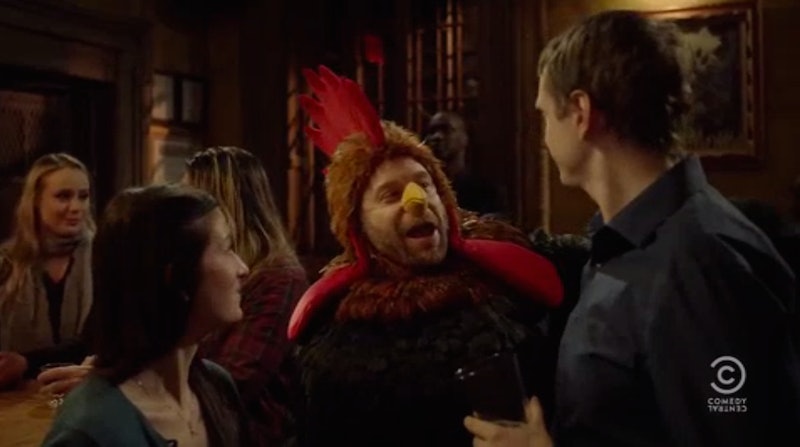 You know what I hate about the dating world? The idea that some men blame everyone but themselves for not being able to get a woman interested in them, especially if the person they're blaming is another woman. It's terms like cock-blocking that really grind my gears, you know? Well Amy Schumer, the genius she is, decided to take back the term with a hilarious sketch on her Comedy Central series Inside Amy Schumer in the Season 3 finale. While one of her friends was talking to a guy, Schumer walks up to tell her friend she's ready to go. When the friend leaves and Schumer is stuck with the guy, he accuses her of being a cock block to which she says cock blocking doesn't even exist. Unfortunately cock block does exist and he is not a happy bird.

Schumer is introduced to bird-man himself (played by Inside Amy Schumer all-star and hilarious comedian Jon Glazer) as he's walking around the bar ruining the chances of every man trying to score with a chick. When she finally encounters him, they're exchange is absolutely frightening. Turns out that despite cock block being a seemingly jovial bird-man who hands out T-shirts to the victim of his blockage, is actually a sad little dude who hates what he does to people.

Long story short, The term "cock-block" is dumb. And to all the men who want to blame everyone but themselves for striking out, here's an important message about the women you tried and failed to seduce: She's just not that into you.

More like this
Lydia Leonard Is Setting The Record Straight
By Olivia-Anne Cleary
Sandra Bullock, Girlboss Extraordinaire
By Matt Harkins & Viviana Olen
Spice Girls’ Net Worth: The Richest Member Is Wealthier Than The Rest Combined
By Hugh McIntyre
The Good Doctor Already Added 2 New Cast Members For Season 6
By Brad Witter
Get Even More From Bustle — Sign Up For The Newsletter