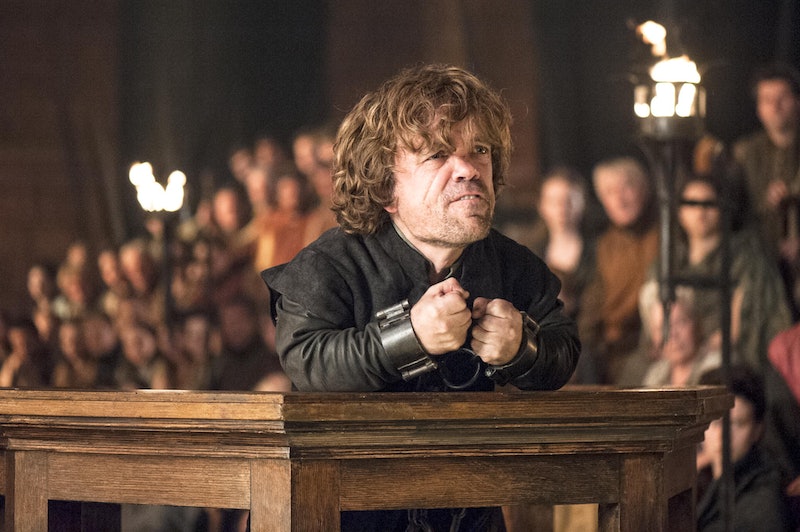 By now, if you are an avid Game of Thrones fan you know that there are many wild theories floating around in the Internet world. Most of the theories revolve around Jon Snow and how there is a chance Jon Snow may return to Game of Thrones, but there are also some theories about our favorite Lannister. Some say that Tyrion Lannister could be a Targaryen. Now, I am fully on board with the idea that Jon Snow could be a Targaryen because that is completely plausible, but Tyrion? I am not so convinced about this idea. Plus, Tyrion, Jon, and Dany being related? That’s a little too soap opera-y for my taste. But, before I dive into all the reasons it wouldn’t make sense for that theory to pan out, let’s talk about what the theory entails.

Basically King Aerys Targaryen or as he’s better known, The Mad King, wanted to hook up with Tywin Lannister’s wife Joanna, and because he's a king, and a mad king at that, he can pretty much do whatever he wants. Barristan Selmy said that Aerys got drunk at Tywin and Joanna's wedding and made a comment saying, "It was a great pity that the lord's right to the first night had been abolished," which I'm pretty positive meant that the king got to have sex with newly married women. Barristan also said that Aerys took "liberties" with Joanna on her wedding, but no one knows what that means exactly. There are rumors that Tyrion, Daenerys, and Jon Snow make up the three heads of the dragon and that because in the books Tyrion has light blonde hair and two different colored eyes, and he resembled the Targaryen clan more than his own.

Personally, that's not enough for to make me believe that he's a Targaryen, though. And, here's why:

Assuming that Aerys only "took liberties" on Joanna's wedding night, it wouldn't make sense that Tyrion would be his kid because Jaime and Cersei are older than Tyrion is. So we know that night was not the night that Aerys fathered a child with Joanna. We also have no idea if Joanna was at King's Landing around the time Tyrion was conceived. She very well could have been at Casterly Rock while Tywin was serving as Hand of The King. No one really knows, but as far as evidence here, there's not much.

It Would Ruin The Tywin/Tyrion Plot

The sweet justice that we all felt when Tyrion took down his father — who was going to have him killed and slept with the woman Tyrion loved — would be rendered useless. What was the point of all that if it wasn't actually his real father? I know I would be pretty let down if Father's Day 2014 wasn't the day Tyrion Lannister killed his dad.

Tyrion Is Kind Of Similar To Tywin

Compared to Jaime and Cersei, Tyrion is the most like Tywin in many ways. He’s extremely intelligent and politically savvy. So it’s kind of ironic that Tywin hates Tyrion so much when he’s like him in so many ways. Also Shae is proof that they might be into the same type of woman. If Tyrion wasn’t a dwarf, he would be the star of the Lannister family. It’s kind of sad.

Another Theory Suggests Aegon Is Alive

In another theory that seems to make more sense, it is suggested that Rhaegar Targaryen's son is still alive and hidden somewhere. It would mean that the whole three heads of the dragon thing would be filled by Dany, Jon Snow, and Rhaegar's son Aegon. Honestly, this sounds much more believable and would be a cool plot twist.

Why Wouldn't Tywin Have Killed Tyrion?

People are really focusing on Tywin saying, "You are no son of mine" before he died saying that he knew, but there is no way that Tywin would have kept Tyrion alive for so long and talked so much about family if he had any idea at all that Tyrion wasn't his. It's just not real, he was speaking figuratively, move on.

People Reading Too Much Into It

Sometimes people just read way too much into the small details to come up with a theory, especially when it comes to Game of Thrones. I'm sorry, there is just not enough evidence to support this Tyrion theory. But, keep on going with that Jon Snow is alive one, because that has to be true.