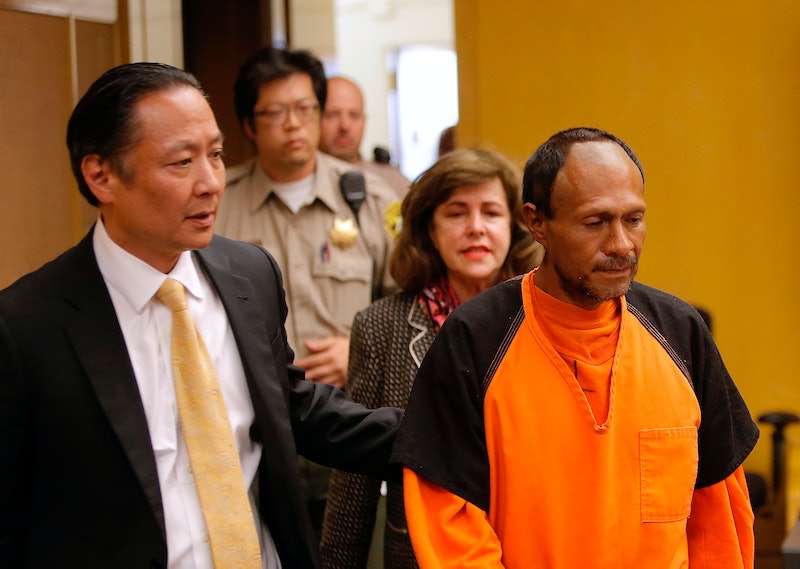 There's a new development in the San Francisco pier shooting of Kathryn Steinle — one that will no doubt raise more concerns among gun control and immigration advocates. According to the San Francisco Chronicle, the gun that Juan Francisco Lopez-Sanchez, a suspected undocumented immigrant, used in the shooting belonged to a federal agent. Officials believe the gun, a .40-caliber pistol, was stolen in a car burglary shortly before the fatal shooting on July 1.

Anonymous sources close to the investigation told the Chronicle the pistol was connected to a federal agent, but it may not have been the agent's "official" gun. The car burglary reportedly occurred in San Francisco's downtown area sometime in June. It's unclear at this time if Lopez-Sanchez was involved with the car theft.

Lopez-Sanchez, who authorities suspect is an immigrant in America without documentation, initially told ABC7 News in an interview that he found the gun wrapped in a T-shirt. He said the gun was lying near a bench. Steinle, who had just moved to San Francisco, was walking along the popular waterfront walkway with her father when she was hit in the back by a bullet, which Lopez-Sanchez told ABC7 was fired as soon as he touched the pistol. Lopez-Sanchez has maintained that the shooting at San Francisco's bustling Embarcadero was an accident, and has pleaded not guilty to one charge of murder.

This San Francisco shooting has become a bizarre political talking point in the 2016 presidential race. As it turns out, Lopez-Sanchez was deported by immigrant officials at least five times, the Los Angeles Times reported. He also had past criminal convictions in America stemming back 20 years, including felony possession of heroin. The LA Times reported that Lopez-Sanchez had also been charged several times with illegally entering the United States after he was deported.

Republican presidential candidate Donald Trump has used Lopez-Sanchez to attack what he claims are too-lenient policies on illegal immigration in the United States. Trump said the San Francisco shooting was a strong argument for closing the border, and slammed San Francisco for being a "sanctuary city."

"Nobody else has the guts to even talk about it. The American people deserve a wall," Trump said in a statement this week. He added that the shooting was a "senseless and totally preventable act of violence." The GOP candidate later doubled down on his comments, saying, "Mexico has taken advantage of us."

Even Democratic candidate Hillary Clinton jumped into the fray. In an interview with CNN Tuesday night, Clinton harshly criticized San Francisco's "sanctuary" policy. "The city made a mistake, not to deport someone that the federal government strongly felt should be deported," Clinton told CNN. "So I have absolutely no support for a city that ignores the strong evidence that should be acted on."

More like this
Sarah Everard’s Killer Wayne Couzens Is Appealing His Whole-Life Sentence
By Sophie McEvoy
How To Fight For Reproductive Rights, Based On How Much Time You Have
By Courtney Young
LGBT+ Men Fleeing Afghanistan Were Denied Asylum By The Home Office, New Findings Show
By Sam Ramsden
'The Spy Who Died Twice' Is Based On A Major British Scandal
By El Hunt
Get Even More From Bustle — Sign Up For The Newsletter