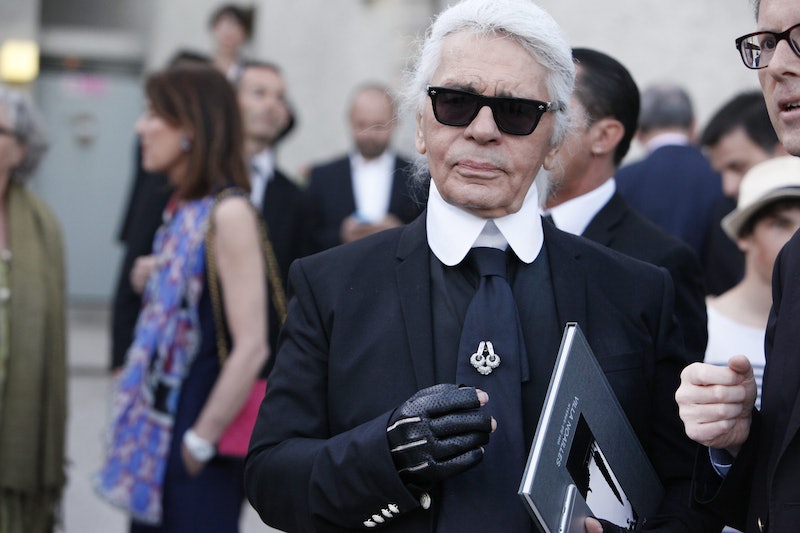 Fur is probably the most polarizing fabric in fashion, for extremely obvious reasons. Animal activists and conscientious fashionistas can't co-sign the slaughter of an animal for its pelt in order to make a coat or a bag. Fur in fashion inspires heated debates and is a matter of taste. The fact that Karl Lagerfeld's haute fourrure Fendi show is all-fur should certainly turn the heads of both fur wearers and passionate anti-fur crusaders alike.

However, the silver ponytail and leather glove-wearing Lagerfeld did shed some light on working with fur and how he manipulates the material as an artisan in an in-depth chat with Women's Wear Daily.

It doesn't do anything at all to alter my personal stance about not wearing fur, but it did offer a so-deep-it-reaches-marrow insight into Lagerfeld's point of view as a designer. The man truly does see fashion and clothing itself from a broad perspective. His envisions clothes like works of art.

In his feature, he talks about the pelts he does not prefer and the fact that he himself does not wear the fabric. Overall, the chat won't do anything to shift the divisive nature of fur, but at least it's a clear perspective.

Here are the five key things Lagerfeld explained about his fur perspective. Or "furspective."

A haute fourrure show is unlikely to happen every season. According to Lagerfeld, "I'm too busy perhaps to do it all the time. And there’s a problem because there are hardly any skins left, you know."

The designer, who also heads Chanel, mentioned to WWD that you could have 20 sable coats in a fashion show finale 30 years ago. That's not so today due to changes in hunting.

"We have to invent unbelievable techniques and mix them with feathers and other things like that because the world has changed," he said. "We are not in the '80s anymore."

2. Fur Is Scarce And Therefore Expensive

Lagerfeld didn't shy away from discussing the protestors. He knows they are out there; how can he not? He noted the lack of available fur, saying "... the activists don't have to be too angry because there is less and less and it becomes more and more expensive.The sable coat today is expensive, like people pay less for a house than for a sable coat. It’s unbelievable!"

Lagerfeld also described furs in the '70s and '80s as "horrible, because... they had all floor-length mink coats that were really not beautiful and very heavy to wear."

3. Fur Is A Thing In Hot Countries?

Furs are now becoming popular in scorching climates. Really? Really. I never knew that. The designer said, "Summer furs, they hardly exist, but now furs are also bought by the hot countries. They put the air-conditioning in their houses to under zero and then they can wear the fur. I don’t think too much about seasons you know, because it’s warm and cold in the world, in different moments."

Lagerfeld views fur as another fabric. "I see it like another material: velvet or fur, it’s the same thing," he said. "It's just another technique, it’s something else, as tweed is also something else."

5. Not Down With Panther Or Print

He may like sable, but he doesn't wear it. He wore fur in the '60s but noted, "My house is too heated for a sable bed cover, but I think fur covers can be very beautiful."

There you have it. An iconic designer offers his unfettered take on working with fur.

My take? I'd rather see designers get really creative and create works of art with synthetic materials. Just sayin'.