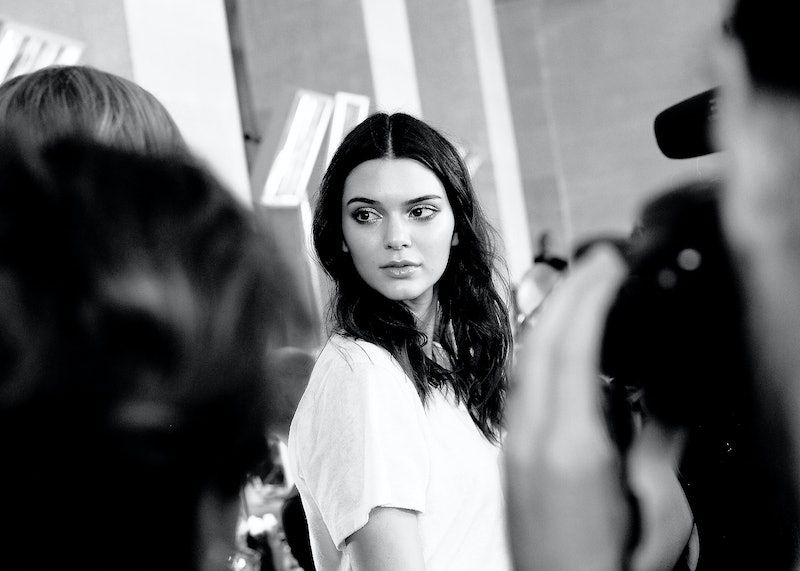 If you thought the only thing this model of the moment was doing this week was walking in Chanel Haute Couture and Atelier Versace, you were wrong. Being the superstar that she is, Kendall Jenner's latest campaign with Calvin Klein Underwear was also released today.

The new underwear ads are her sexiest yet. The campaign features Jenner clad in lacy bras from Calvin Klein's higher end collection, Calvin Klein Black, which the brand has deemed the resurrection of "the original sexy." The risqué campaign also features models Joan Smalls and Isabeli Fontana.

“It was super fun. Every girl loves posing in her underwear. It’s always fun to do that,” Jenner told WWD last week. The 19-year-old model previewed the photos on her Instagram today, and needless to say fans are already drooling over the daring new ads.

In terms of what it took to get the shots, Jenner also discussed her friendship with the other girls (such as Smalls) and her packed schedule during fashion week.

“I had flown in from Paris from Fashion Week for the day, and flew out that night to do the Chanel show,” she explained. It's hard to be a supermodel, no? But at least joining her friends on set made it a better experience.

"Mikael Jansson shot it, and he and I have a good chemistry. Having girls around who are all my friends, the energy was really great,” she said in refrence to the campaign's other supermodel faces.

According to Melisa Goldie, chief marketing officer of Calvin Klein, the brand also sees the latest campaign as a stride to reinvent the image of its traditional underwear. “Calvin Klein originated sexy, and we’re going to reclaim, reimagine and reimage it," Goldie told WWD. “We’re bringing together a powerful mix of women from all over the world to celebrate our heritage as a leader in the intimates category.”

Goldie also stressed the importance of having Jenner front Calvin Klein's most recent campaigns. "She’s already bringing a compelling energy to our brand that enables us to engage with a younger audience," she said. Goldie explained that between Jenner's huge fan base and maturity for her age, she makes the perfect candidate for these underwear ads, despite their sexy appeal.

Calvin Klein also released a video starring the faces of the campaign, and it's probably going to be the best thing to happen to your Wednesday morning. Jenner described the collection as “really timeless, chic and classy,” and I have to agree.

There's no word when this collection drops, but I'll definitely be marking my calendar ASAP.