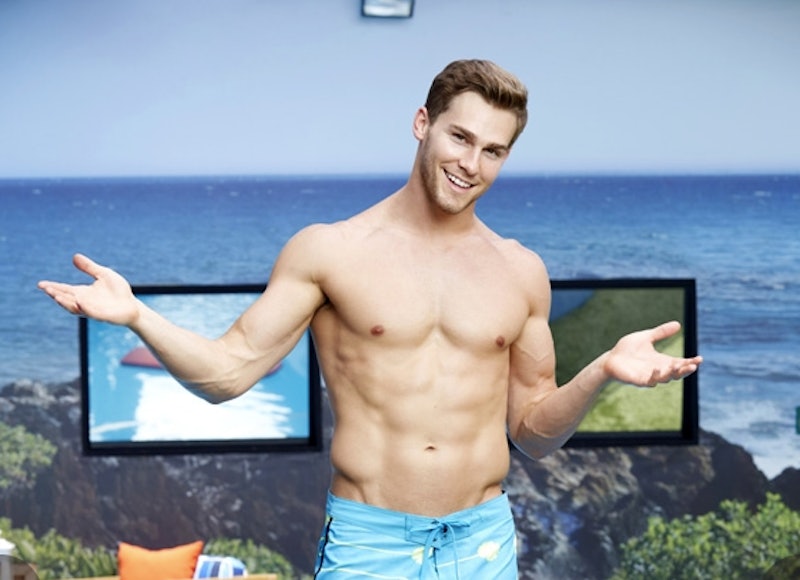 Can somebody get a bunch of executives from ABC on the phone? I want to let them know that they can stop looking for the next Bachelor, because we've already found him. I think Clay Honeycutt should be the next Bachelor. That's right, not any of the choices they're currently grappling with, like Human Wall of Meat Ben Zorn or Fake Cryer On Top of an Irish Cliff Chris "Cupcake" Strandburg, but a contestant on an entirely different franchise. Clay is a house guest on Big Brother Season 17, which means that, if you have a couple dollars and your whole life free, you can watch him 24/7 on the feeds in the Big Brother house, where he'll (hopefully!) be living until the end of the summer, scheming, plotting, and furthering his adorable showmance with fellow contestant Shelli Poole.

As it turns out, that showmance is a big part of the proof that Clay would be an excellent choice for the next season of The Bachelor. And, even though ABC is an entirely different channel from CBS, and the two really don't cross-promote at all, I've come up with a list of seven reasons why Clay would be the ultimate Bachelor.

Clay played football for Texas A&M — he was a defensive back — so he's already pretty well known around town.

4. He Has Flirting Down

He was barely in the door at BB17 five minutes before he made it clear he was interested in Shelli, and the two have been pretty much inseparable since. I hereby give him my First Impression Rose.

Clay has been vocal about being attracted to women who are older than him (like Shelli, who has 10 years on him), so having him as the Bachelor would be a refreshing role reversal from all the 30-something Bachelors surrounding themselves with 21 year olds. I'm looking at you, Juan Pablo.

6. He Has A Ridiculously Perfect Name For It

How can you resist a dude named Clay Honeycutt? He's a honey, and he's cut, and he's been ready for TV since the doctors first wrote the name on his birth certificate.

7. Former Bachelorette Contestants Don't Seem To Be Cutting It

Of all the dudes on all 19 past seasons of The Bachelor, only one is currently married to his final picks: Sean Lowe, who married Catherine Giudice. (Jason Mesnick is married as well, but to the runner-up from his season, Molly Malaney.) So, bottom line is these guys obviously don't know how to pick 'em, and we couldn't go wrong by giving Clay a shot at it.

With one house guest evicted every week all summer, Clay's getting himself excellent experience dealing with weekly goodbyes, which would come in ever-so handy on The Bachelor.

That sound you're hearing? It's every woman in America making a mad dash to go apply for the show just in case Clay ends up getting on.

More like this
Kourtney & Travis Crashed His Daughter’s TikTok Live In Their 2nd Wedding Outfits
By Grace Wehniainen
When Was 'Bling Empire' Season 2 Filmed?
By Alyssa Lapid
There's Plenty Of Drama Brewing To Warrant A 'Summer House' Season 7
By Brad Witter
There's One Big Reason Bru & Alyssa Aren't Dating After 'The Circle'
By Gretchen Smail
Get Even More From Bustle — Sign Up For The Newsletter