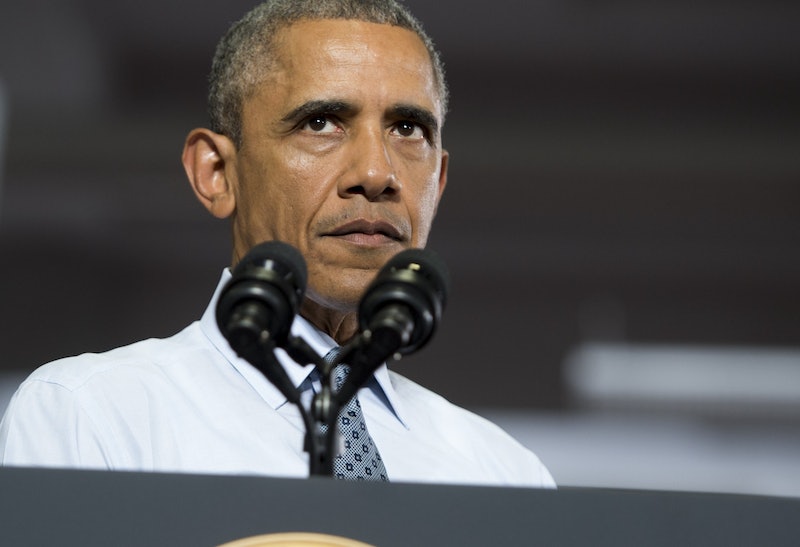 In the coming weeks, President Barack Obama will commute the sentences of dozens more nonviolent drug offenders, his aides told The New York Times Wednesday. The commutations, which reduce offenders’ sentences but would not void their convictions, follow concerted efforts from the White House and former Attorney General Eric Holder to redress the unfair impact of mass incarceration on generations of predominantly African-American and Hispanic youth. Last April, the Obama administration announced that it would be looking to use the President’s power to grant pardons and commute sentences in order to give chances back to nonviolent drug offenders with clean prison records who would likely already have been out of jail, absent the harsh mandatory minimum schemes that regulate offenses related to drugs like crack cocaine. (Update: On Monday, Obama commuted the sentence of 46 prisoners, saying their sentences "did not fit their crimes.")

Since then, more than 30,000 offenders have submitted applications for clemency, but backlogs have plagued the small Office of the Pardon Attorney and limited the impact of Obama’s commutations, even as they remain a powerful symbolic gesture.

As President, Obama has the power to grant full pardons, which absolve people of all wrongdoing and protect them from punitive action, as well as to shorten federal prisoners’ sentences. Since taking office in 2008, the President has only commuted 43 sentences, and he's performed all but one of these commutations in his second term. He granted freedom to eight people in December 2013, six of whom were serving life sentences. In March of this year, Obama signed commutations for a further 22 people, decrying what he saw to be overly harsh and unfair sentences imposed under old sentencing laws.

In its clemency process, Deputy Attorney General James Cole stressed that the White House is looking for nonviolent drug offenders with clean prison records who likely would be out of prison already if they had gone before a judge today.

Many of the federal inmates set to receive their freedom so far spent decades in jail for crack cocaine offenses because they had received their sentences under mandatory minimum laws, which treated crack much more seriously than the drug’s powder form. For years, this differential sentencing scheme came under fire from civil rights groups and criminal justice advocates because it put away predominantly poor Black and Hispanic drug users for long sentences, while letting the predominantly White users of powder cocaine off with something closer to a slap on the wrist.

After the years of pushback against the racial discrimination built into sentencing disparities, Congress rolled back the five-year mandatory sentence for first-time crack cocaine possession and moved to equalize how the courts treated the offenses in the Fair Sentencing Act of 2010. But the FSA does not apply retroactively, meaning that thousands of people still languish unfairly behind bars for crack-related crimes. Families Against Mandatory Minimums, a nonprofit advocacy group that works against laws that lead to mass incarceration, estimates that there are some 8,800 federal offenders in jail for crack offenses whose sentences would be up by now under the new guidelines.

“If they had been sentenced under the current law, many of them would have already served their time and paid their debt to society,” Obama said when he commuted the eight inmates’ sentences in 2013. “Instead, because of a disparity in the law that is now recognized as unjust, they remain in prison, separated from their families and their communities, at a cost of millions of taxpayer dollars each year.”

Combating the mass incarceration epidemic has preoccupied the administration in Obama's second term. Besides changing the sentencing disparities between crack and powder cocaine, Holder sent new sentencing guidelines to federal prosecutors in August 2013 in hopes of decreasing the number of cases subject to the mandatory minimums in the first place.

Obama, in turn, has become increasingly vocal in his push for criminal justice reforms.

“There’s a big chunk of that prison population, a great huge chunk of our criminal justice system that is involved in nonviolent crimes,” the President said in a December 2012 interview with Time. “And it is having a disabling effect on communities. Inner-city communities are most obvious, but when you go into rural communities, you see a similar impact. You have entire populations that are rendered incapable of getting a legitimate job because of a prison record.”

“It gobbles up a huge amount of resources,” the President told Time. “If you look at state budgets, part of the reason that tuition has been rising in public universities across the country is because more and more resources were going into paying for prisons, and that left less money to provide to colleges and universities.”

For Obama, making the economic recovery work for all communities is inherently tied to how we treat drug offenders, both in sentencing and after their incarceration.

“As the economy’s recovering, unemployment is coming down drastically,” the President told The Wire’s David Simon during a March interview. “But one of the puzzles we have is we still have low participation rates among the population in the aggregate ... a big chunk of that is the young male population … with felony histories.”

The U.S. has the largest prison population in the world, both in raw numbers and per capita. Among federal prisoners, nearly half are behind bars on drug charges.

Justice Department attorneys are trying to change those numbers, one commutation at time. But finding the federal inmates eligible for clemency under the proscribed guidelines out of the thousands of drug offenders incarcerated has turned into a bigger task than the administration expected. More than 30,000 people have applied.

To help siphon through the tens of thousands of cases that might be appropriate for the President’s pen, Holder invited nonprofit lawyers to help inmates put together applications. The Clemency Project — staffed by attorneys from nonprofits like the American Civil Liberties Union and helped by volunteers from over 50 law firms and more than 20 law schools — has spent the past year working closely with the Department’s attorneys to help identify suitable candidates.

Still, the low numbers of commutations remain disheartening to some lawyers involved with the work, Politico reported in January.

“The resources are woefully inadequate to address this number of applications,” one lawyer told Politico’s Josh Gerstein this past winter. “It’s an enormous undertaking that was announced with great fanfare and promises being made without much consideration about the resources needed to get the promises fulfilled.”

There is only so much that the President can do to tackle mass incarceration. As Obama noted, the biggest change needs to come from Congress, in the form of getting rid of high mandatory minimum laws for nonviolent drug-related offenses.

“[E]ffectiveness as a prosecutor involves thinking about justice, and being proportional in how you think about these issues,” the President said to Simon in March. “And that’s something we can do administratively, but ultimately we’re going to need legislation.”

The President has thrown his support behind the Smarter Sentencing Act, a bipartisan bill that would halve mandatory minimums, give judges greater discretion in sentencing, and make the Fair Sentencing Act, which equalized penalties for crack and powder cocaine, apply retroactively to older cases. At the moment, the effort to halt the flood of nonviolent offenders into American prisons enjoys widespread political support on both sides of the aisle, as conservatives worry over costs and liberals point out strong evidence of these policies’ discriminatory impact on racial minorities and the poor.

“There is an increasing realization on the left but also on the right, politically, that what we’re doing is counterproductive,” Obama said to Simon.