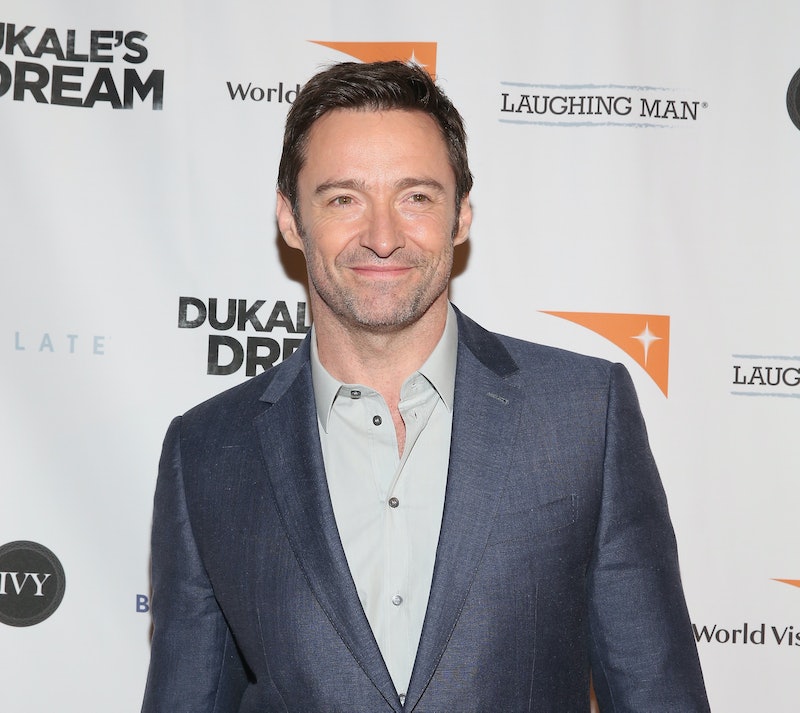 Hugh Jackman may be ready to retire his Wolverine character, but the actor is about to show the world his more villainous side. Following the release of the trailer, Jackman shared the new Pan movie poster. Spoiler: The image confirms that this will be one epic retelling. So how does Pan differ from the Peter Pan story we already know? According to its IMDB page, the 2015 film is "The story of an orphan who is spirited away to the magical Neverland. There, he finds both fun and dangers, and ultimately discovers his destiny — to become the hero who will be forever known as Peter Pan." In other words, it's an origin story that features Jackman assuming the role of a pirate named Blackbeard.

The movie also stars Cara Delevingne, Rooney Mara, Amanda Seyfried, Garrett Hedlund, and Levi Miller as the title character, but it's Jackman who features front and center on the poster because, well, Wolverine. The film will be directed by Joe Wright, who is the man behind films like Atonement, 2005's Pride and Prejudice and 2012's Anna Karenina.

Pan won't hit theaters until October 9, but until then, you can check out seven things the poster reveals about the movie.

Because of course he can.

2. It Will Have Joe Wright's Cinematography

Just check out those rolling hills in the background of the poster. I'm going to bet that the beauty of Neverland will play a huge role in the movie.

3. Levi Miller Already Won Us Over

This kid can hold an audience's attention — even in a still, like the poster.

It might be a different story, but the key Neverland characters are still here.

5. Jackman Isn't The Title Character, But He's A Commanding Presence

Jackman is front and center in the poster, signaling his importance in Pan.

6. Tiger Lily Will Have A Bigger Role

Like Jackman, she's also featured on the poster. Sure, she's in the back, but that's more visibility than she usually gets on the poster of a Peter Pan remake.

7. It Will Be A Different Spin On The Story We Know

One look at the poster's portrayal of Captain Hook lets us know that we're in for a completely different experience. If you weren't already excited for this Peter Pan retelling, then this poster has more than enough packed into it to guarantee that you'll be right next to me in the theaters when the movie comes out.

More like this
The 1st Photo Of Priyanka & Nick's' Baby Comes After 100 Days In The Hospital
By Jake Viswanath and Hugh McIntyre
Watch The Dramatic First Trailer For Netflix's Jennifer Lopez Documentary
By Alyssa Lapid
What Does Doctor Strange’s Third Eye Mean?
By Arya Roshanian
What’s New On Netflix: A Victoria Justice Rom-Com & The Return Of David Letterman
By Arya Roshanian
Get Even More From Bustle — Sign Up For The Newsletter