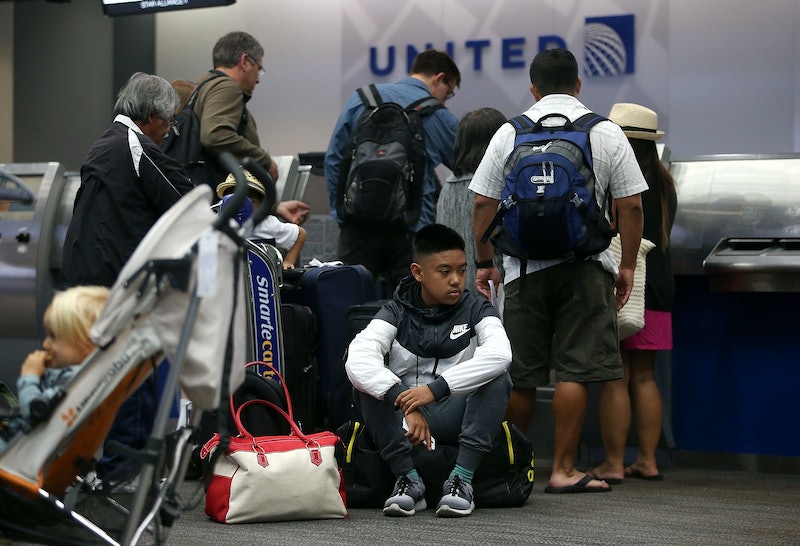 Wednesday morning, the New York Stock Exchange, United Airlines, and the Wall Street Journal website all experienced technical difficulties that temporarily shut down their operations. The NYSE stopped trading around 11:30 in the morning. United grounded flights worldwide for nearly three hours, resulting in massive delays and problems for passengers. Though the WSJ's website is up and running now, it was also curiously down around the same time the NYSE experienced technical problems. The concurrence of the malfunctions gave rise to questions of coordinated cyber terrorism that the Department of Homeland Security has since put to rest, but people are still upset. Memes about the technical problems at the NYSE, Unitanded, and the WSJ express just how annoyed people can get when their flight has been grounded for two hours without a clear explanation.

Because just when you thought flying couldn't get any more cumbersome, somehow United found a way. (I joke.) An official with DHS told CNN "there's no sign of malicious activity" in any of these technical problems. Reuters tweeted that the United issue resulted from a degraded router that inhibited network connectivity. The WSJ never released a reason its downtime, but officials told Politico that the homepage may have crashed because of all the traffic from the NYSE news. Regardless, people hate it when the Internet isn't working, and they especially hate it when technical difficulties delay thousands of flights. Here are some reactions, in meme form:

More like this
How To Fight For Reproductive Rights, Based On How Much Time You Have
By Courtney Young
The Music Industry Continues To Fail Black Women
By Precious Adesina
Sarah Everard’s Killer Wayne Couzens Is Appealing His Whole-Life Sentence
By Sophie McEvoy
On TikTok, Miley Cyrus’ “Malibu” Is The Soundtrack Of Growth
By Courtney Young
Get Even More From Bustle — Sign Up For The Newsletter