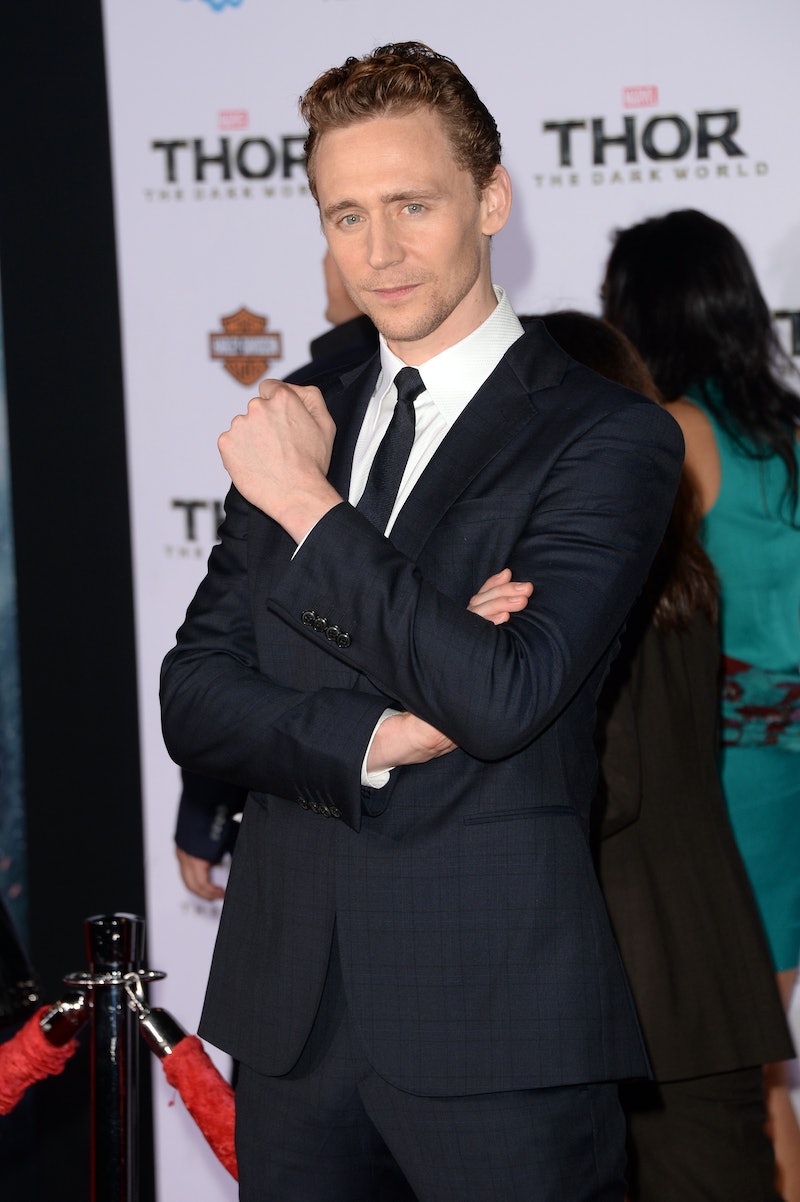 Have you been paying attention to the biggest tennis tournament of the year? Even if you aren't into the whole tennis playing thing, I know you're interested in who's attending Wimbledon games. For example, Kate Middleton and Prince William went on a date to watch tennis player Andy Murray. If you're wondering, yes, they looked impeccable. You know who else went to the classy games? Tom Hiddleston was at Wimbledon. I bet you never wanted to watch tennis so badly, huh?

Many Hiddlestoners shared photos of the man behind Loki at Wimbledon on Twitter — and I thank them. A lot. The Avengers star never looked so dapper. Yep, he made Wimbledon an even classier affair than it already was. Just look at that suit and pinstripe dress shirt. And what about that umbrella? Never has an umbrella looked so sophisticated. Oh, and those glasses? Dayum, Hiddleston.

If you didn't know, the actor is a lifelong tennis fan who watches Wimbledon "religiously," as he told Elle in 2012. So, the fact that he was at the tournament makes total sense. The 34-year-old revealed at the time, "The architecture of my life is that Wimbledon always used to be the herald of the summer, because it was the end of exams and the beginning of the school holidays, and therefore the beginning of fun." Also, for those looking for Wimbledon tipcs, Hiddleston said it's important and quite "practical" to go to the bathroom before finding your seat. Noted.

Now, let's check out how Hiddleston and Wimbledon make one classy duo.

Hiddleston In A Hat

Everyone is jealous of that hat.

First, I'm concerned that this child is trapped in that sweater. Second, is that lady yelling at Tom or asking for an autograph?

Uh oh. Did someone just make a bad play?

This how you dress for Wimbledon.

More like this
Jake Daniels Just Became The UK’s First Active Football Player To Come Out As Gay Since 1990
By Sam Ramsden
What Is Jeanie Buss' Net Worth? The Lakers President Is Uber Rich
By Hugh McIntyre
Rihanna Skipped The Met Gala For Good Reason — But She Still Stole The Show
By Alyssa Lapid
Teyana Taylor Channeled Aaliyah In Y2K Thong & Leather Pants
By Dominique Norman
Get Even More From Bustle — Sign Up For The Newsletter