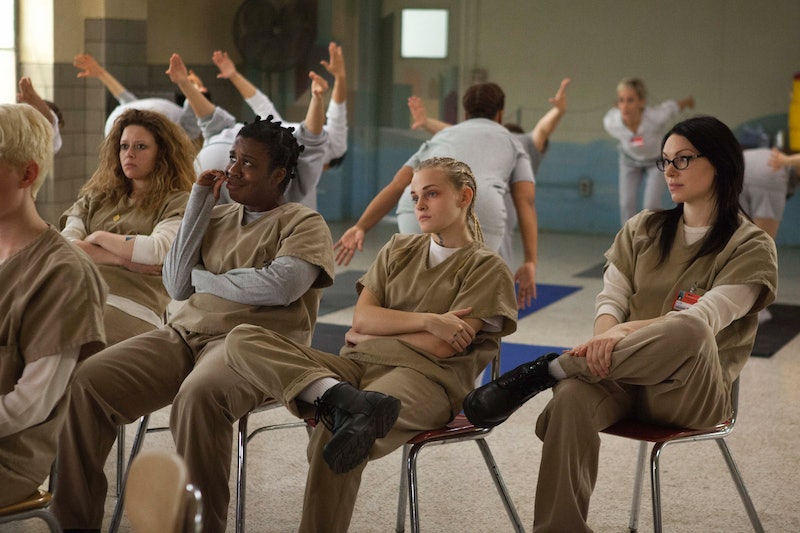 While binge-watching Orange is the New Black, I found myself thinking, "prison doesn't look that bad." Most of the prisoners developed strong friendships, they have jobs to keep them busy, they can sneakily make hooch, and they always look flawless, despite the supposed lack of beauty supplies. Yes, a few scenes give a glimpse of how difficult life in prison can be, but overall, the show glamorizes incarceration. Life in a real prison is anything but glamorous, especially for women. Because prisons don't properly account for women's needs, like prenatal care and feminine products, women face a very different reality than men when incarcerated in the U.S. So, what's it like to be a woman in prison?

As a result of overall incarceration rates skyrocketing in America, there are more women behind bars than ever before. In 2010, there were nearly 113,000 women in prison, up from only 15,000 in 1980. Including women in local jails, there are currently more than 200,000 American women incarcerated. Most of these women are imprisoned for nonviolent crimes, like drug and property offenses, according to a study by The Sentencing Project.

Being a female inmate is not easy — there are multiple daily struggles that men in prison simply don't have to worry about, because, well, they're men. Here are six things about being a women in prison that you probably didn't know.

Getting Your Period Is 10 Times Worse

If you think getting your period is bad as a free civilian, imagine getting it in prison. Female inmates are given a shockingly low number of pads each month — Chandra Bozelko, a former inmate at York Correctional Institution in Connecticut, wrote in The Guardian that each woman was given 10 pads per month (which means they can only change it once a day for a five-day period). Bozelko also described pads flying out of women's pants because they were forced to wear them for days and the adhesive wore off. Similarly, a study by The Correctional Association of New York found that the majority of female inmates interviewed didn't think they were given an adequate amount of feminine products. Inmates that have money can buy additional pads and tampons in the prison commissary, but those without have to suffer through it every month.

According to The Sentencing Project's report, one in 25 women in state prisons and one in 33 in federal prisons are pregnant when they're first incarcerated, and these women often don't receive the medical care expecting mothers desperately need. The National Women’s Law Center (NWLC) graded each state on its prenatal care policies, and gave 38 states a failing grade for not giving pregnant inmates adequate prenatal health care. According to the NWLC, 43 states don't require pregnant women to have medical exams, 41 don't require prenatal nutrition counseling or the provision of appropriate food, 34 don't require screening or treatment for women with high-risk pregnancies, and 48 don't offer pregnant women HIV screenings.

You Can Be Shackled While Giving Birth

Pregnant inmates can also be forced to wear shackles while giving birth, which makes it more difficult for doctors to assess the condition of mothers and fetuses, and makes labor and delivery more painful (as if it's not already painful enough). The Federal Bureau of Prisons stopped shackling inmates in 2008, but many state prisons still do it. According to the NWLC, 22 states either have no policy prohibiting the use of restraints or have policies which explicitly allow the use of leg irons or waist chains on prisoners giving birth. Also, 31 states don't require input from a medical professional before placing a pregnant woman in shackles, putting them and their baby at risk.

You're More Likely To Be Sexually Assaulted

As we all know, women need more toilet paper than men, but they're given the same amount because prisons operate on gender-neutral policies. This results in female inmates not having nearly enough toilet paper. Inmates in New York state prisons get five or six rolls each month, and more than two-thirds of female inmates surveyed by The Correctional Association of New York said they didn't receive enough toilet paper. Just like with maxi pads, buying more isn't an option for women with little resources.

Mothers Can't Be With Their Kids

Whether they had children before or while incarcerated, women in prison can't be with their kids. The majority of women in prison have children — 62 percent of state inmates and 56 percent of federal inmates, according to the Bureau of Justice. Being away from their children for years at a time can take an emotional toll on women, especially if they're imprisoned across the country, making it harder for their kids to visit.