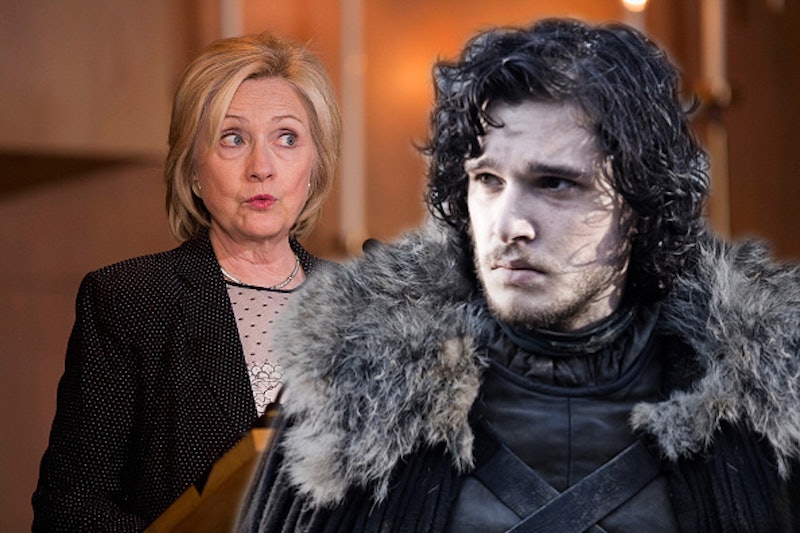 On Tuesday evening, Hillary Clinton gave her first national interview since announcing her Presidential bid, talking to Brianna Keilar for CNN. Keilar didn't seem to go too hard or too soft on Clinton throughout the interview, and most of the questions were pretty predictable. Topics of discussion were email-gate, Donald Trump's highly controversial comments about Mexican immigrants, and Saturday Night Live actresses who have impersonated Clinton. Okay, perhaps the SNL question wasn't quite so run-of-the-mill. And it got me wondering about what our favorite TV characters would ask Hillary in an interview. The possibilities are essentially endless.

Now I'm not saying that Keilar didn't do a thorough interview, and I'm also not saying that Clinton didn't give us some pretty decent answers to work with. I'm just proposing that our nation's next possible leader should be as obsessed with TV as I am. Is that too much to ask for? No. If my Facebook news feed is any indicator, people care about television and Netflix about as much as, if not more than, they care about politics (we should probably do something about that, guys). So the issues that matter in House of Cards, Orange is the New Black, Seinfeld (thank you, Hulu!), and Sense8 are the issues that matter to America, dang it! Here are some questions I think some of our TV faves would want to ask Hillary Clinton (I'm allowing for some defunct characters and shows, because I am just not good at letting go).

Jon Snow from Game of Thrones

"My lady, I'd just like to ask: What is your plan for the U.S. once winter comes? It is coming, you know. I'm not sure if you'd heard about that."

"Hillary, hi, hello, big fan. So I am wondering what your plan is to advance the trans rights movement if you take office? Also, will you lighten sentencing minimums for convicted hackers?"

"Good to see you again, Hillary. I wanted to ask, how do you feel about white hats? Also, what is your stance on standing in the sun?"

"So, Hillary. If you become president, will we finally see the day when Festivus is recognized as a real holiday? Cause I gotta know, Hillary!"

"Oh my gosh, hiiiiii! Yes, so, very excited to be here. Obviously. I mean you're Hillary Clinton, so. Yeah, I mean, girlfriend. Let's just talk about you. How are you feeling? Are you okay? Do you want me to sing to you?"

Sophia Burset from Orange Is The New Black

"Mrs. Clinton, I don't have a question. I just want to tell you that that blue pantsuit is fierce."

"So, how might one go about applying to be your Vice President?"

"How do you feel about chicken wings? Are you for or against?"

So there we have it. From our living rooms to Hillary Clinton's campaign headquarters, we demand answers to these questions. Especially about winter. Everyone else has a plan. We need to know if Hillary is ready.

More like this
'Games of Thrones' Fans May Recognise This 'Conversations With Friends' Location
By El Hunt
The Trailer For The 'Game Of Thrones' Prequel 'House Of The Dragon' Is Dark AF
By Grace Wehniainen
Watch Benedict Cumberbatch Lead An ‘SNL’ Medieval History Lesson On Roe v. Wade
By Grace Wehniainen
'Unforgotten's Brand New Character Joins At A Pivotal Moment For S5
By Bustle UK
Get Even More From Bustle — Sign Up For The Newsletter