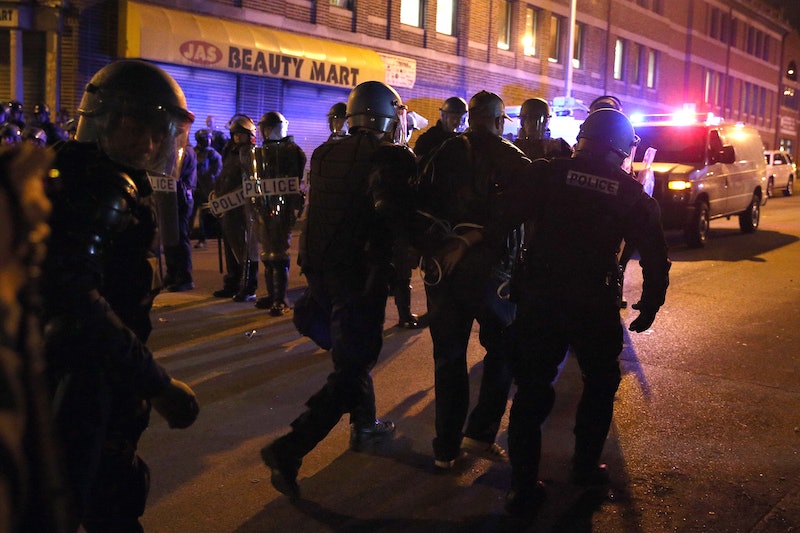 It's got the entire city of Baltimore reeling, and now people want to read the report of the Baltimore police conduct during the April protests. Well, you're in luck: The review is available on the union's website. The report, released Wednesday, alleges that the Baltimore police commissioner ordered officers to permit rioting that ensued after the death of Freddie Gray in April. Mayor Stephanie Rawlings-Blake was quick to renounce the report, saying it was based on "false information." Back in April, Gray, 25, was arrested and suffered a fatal injury to his spinal cord when he was transported in a police van without restraints, according to prosecutors. In May, State’s Attorney Marilyn Mosby announced a grand jury had indicted all six officers charged in Freddie Gray’s death.

After Gray's funeral, days of public of protests ravaged the city. During that time, the police union's review states, commissioner Anthony Batts ordered police not to engage protesters. According to the review, which cites both named and unnamed sources, officers were "restricted in their response to the rioting and, as a result, the situation was spiraling out of control. Additionally, officers reported that they had suffered injuries from the lack of protective riot equipment."

Mayor Rawlings-Blake had harsh words of her own on Wednesday. "Our hope was that this report would shed some additional light on how we can better prepare our officers should there be future unrest," she said in a statement. "Instead this report is no more than a trumped up political document full of baseless accusations, finger-pointing and personal attacks."

The police union review also stated that the mayor should have requested assistance from the National Guard earlier than she did. National Guard troops were eventually called into the city on April 27.

Rawlings-Blake's office is still working on its own review of how police and top brass handled the unrest, according to The Guardian. She did not provide a date for the release of that report. And in May, the mayor asked the U.S. Justice Department for a civil rights investigation of Baltimore’s police department, the Times reported.

A few hours after the report was released on Wednesday, Rawlings-Blake fired Batts, The New York Times reported. The mayor said her decision to fire Batts was not influenced by the union or its report, according to the Times, but was in response to an uptick in violent crime in Baltimore. "Recent events have placed an intense focus on our police leadership, distracting many from what needs to be our main focus: the fight against crime. So we need a change," the mayor said.

The day before Batts was fired, three people were killed in shootings in Baltimore, which the mayor said was part of the reason for the commissioner's dismissal, Reuters reported.

"As we have seen in recent weeks, many continue to die. Families are tired of feeling the pain, and so am I," Rawlings-Blake said.