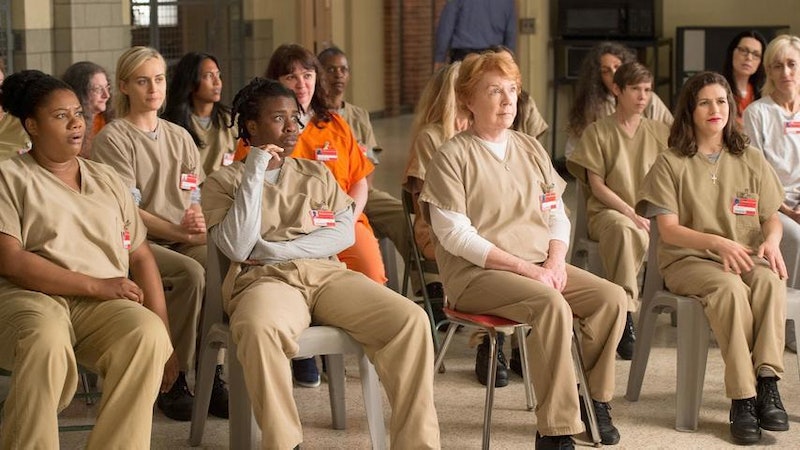 Orange Is The New Black has put women's federal prisons in the public spotlight, but the show is not an entirely accurate representation of women in jail. The majority of women in prison, writes Amos Irwin for The Huffington Post, are incarcerated because of low-level, nonviolent drug crimes, and yet they serve an average sentence of more than seven years. In fact, women have always been more likely than men to be imprisoned for drug-related offenses. According to Kristina Marusic, who explored facts and statistics about women in prison for MTV News back in April, they are also disproportionately likely to face sexual assault, they are frequently denied resources like health care, and they are often unable to obtain treatment for mental illness.

It is also necessary to think about how LGBTQ women and women of color experience disproportionately high rates of incarceration for low-level crimes and tend to face higher rates of abuse when in prison — something that the National Center for Transgender Equality is trying to draw attention to. According to the National Center for Lesbian Rights, trans women are often placed in men's prisons or denied access to hormones, both of which are forms of violence against transgender people.

Citing data from the International Centre for Prison Studies, Niall McCarthy made an infographic for Forbes last year indicating that nearly one-third of the world's incarcerated women were in the United States. The conversation about mass incarceration has at last started to focus on racial inequality, but this conversation must expand to include discussions of gender and other identifications as well. Here are some statistics that reveal the heartbreaking reality of women in prisons.

The stories of the women on Orange Is The New Black are riveting, but most of the drug offenders in women's prisons aren't international smugglers. The war on drugs has resulted in increased criminalization for minor drug offenses, and according to Amos Irwin's piece for The Huffington Post about women's federal prisons, the women who perpetrate these offenses often receive longer sentences than their bosses.

Statistics from The Sentencing Project and Critical Resistance demonstrate that women of color are disproportionately likely to face imprisonment during their lifetimes, resulting in their overrepresentation in the federal prison system. As this particular statistic from the ACLU illustrates, black women only make up 13 percent of the American female population and yet they make up more than twice that percentage of female prisoners.

According the ACLU, more than 1.5 million children have a parent in prison, and more than 8.3 million children — 20 percent of whom are under 5 years old — have a parent under correctional supervision. Additionally, despite being considered inhumane by various international treaties, many pregnant women in police custody — especially undocumented immigrants — are still shackled to restrain them while they're giving birth.

And the rate is much higher when we take a look at state prisons. For example, according to the ACLU, 92 percent of all women in California prisons had been “battered and abused” in their lifetimes. Plus, a 2012 national survey from the Bureau of Justice revealed that approximately 10 percent of young people in juvenile facilities reported sexual victimization by staff members or a peer.

According to The Sentencing Project, an advocacy and reform group, the number of women in prison increased at nearly 1.5 times the rate of men. Compared to other nations with similar rates of female incarceration, though, the reasons for imprisonment seem to stem from one particular prevalent common denominator — the war on drugs.

This shouldn't be surprising; imprisonment is not a deterrent, and it is not an effective way to prevent crime. A report submitted to — though not published by — the U.S. Department of Justice indicated that women "serving time for a property offense or a drug offense were much more likely to have a new arrest than those released in all other offense categories."

So while Orange is the New Black has been bringing the issue of women's federal prisons to public attention, it is crucial that we remember the stories of the women on the show aren't necessarily the stories of all women in prison. The reality of women in prisons is heartbreaking — their lack of access to resources, the abuse they face, and their criminalization as a result of the war on drugs make it clear that when it comes to prison reform, we have a long way to go.

More like this
How To Fight For Reproductive Rights, Based On How Much Time You Have
By Courtney Young
Sandra Bullock, Girlboss Extraordinaire
By Matt Harkins & Viviana Olen
The 'Hocus Pocus' Sequel Finally Has A Release Date & It Makes Total Sense
By Shannon Barbour and Radhika Menon
LGBT+ Men Fleeing Afghanistan Were Denied Asylum By The Home Office, New Findings Show
By Sam Ramsden
Get Even More From Bustle — Sign Up For The Newsletter